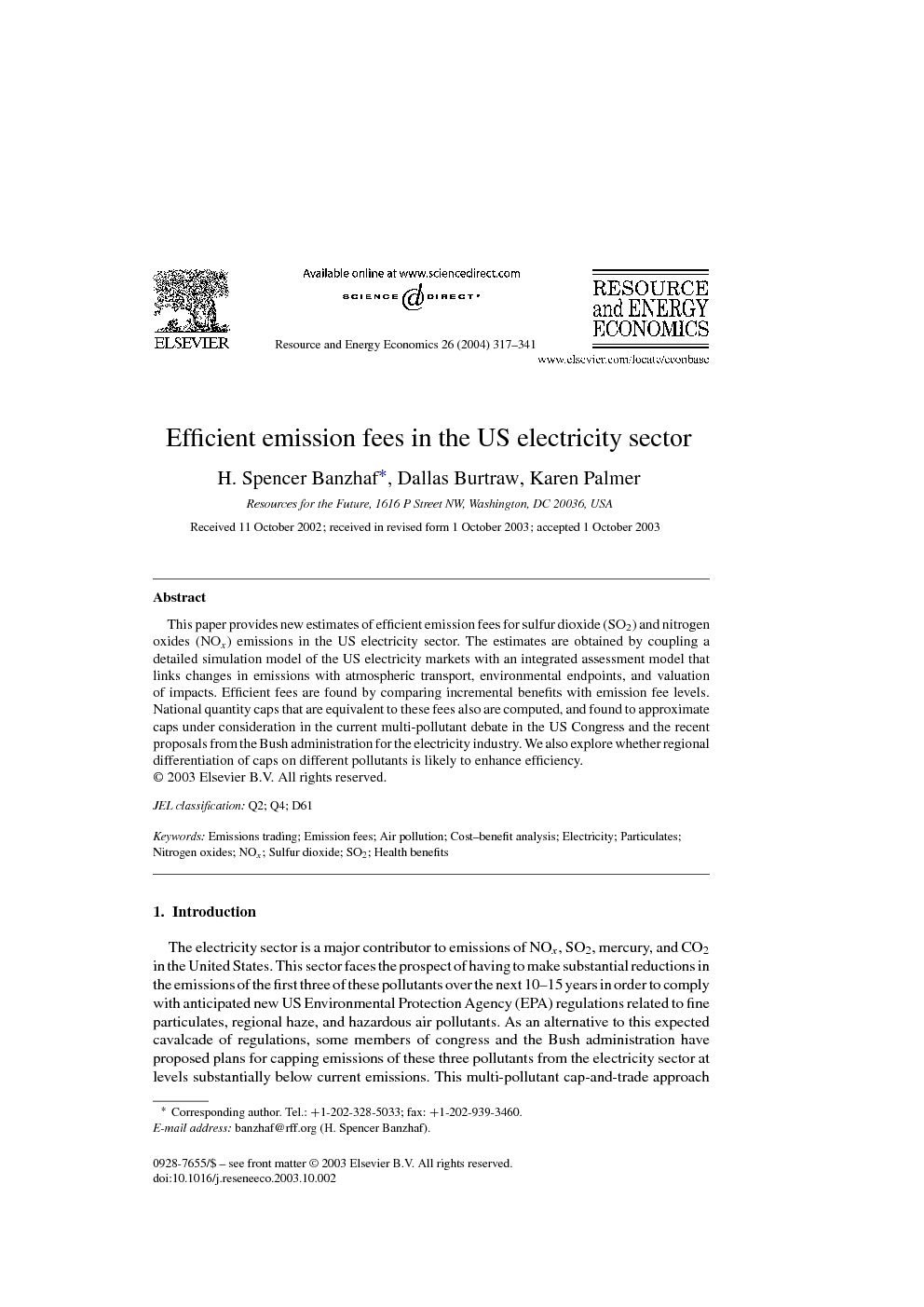 This paper provides new estimates of efficient emission fees for sulfur dioxide (SO2) and nitrogen oxides (NOx) emissions in the US electricity sector. The estimates are obtained by coupling a detailed simulation model of the US electricity markets with an integrated assessment model that links changes in emissions with atmospheric transport, environmental endpoints, and valuation of impacts. Efficient fees are found by comparing incremental benefits with emission fee levels. National quantity caps that are equivalent to these fees also are computed, and found to approximate caps under consideration in the current multi-pollutant debate in the US Congress and the recent proposals from the Bush administration for the electricity industry. We also explore whether regional differentiation of caps on different pollutants is likely to enhance efficiency.

The electricity sector is a major contributor to emissions of NOx, SO2, mercury, and CO2 in the United States. This sector faces the prospect of having to make substantial reductions in the emissions of the first three of these pollutants over the next 10–15 years in order to comply with anticipated new US Environmental Protection Agency (EPA) regulations related to fine particulates, regional haze, and hazardous air pollutants. As an alternative to this expected cavalcade of regulations, some members of congress and the Bush administration have proposed plans for capping emissions of these three pollutants from the electricity sector at levels substantially below current emissions. This multi-pollutant cap-and-trade approach is intended to provide some regulatory certainty to the industry by creating a timetable now for future reductions. By regulating multiple pollutants simultaneously, this approach would allow firms to efficiently allocate their emission reduction activities across different pollutants and to take advantage of synergies in pollution reduction. Also, this approach would provide firms with the flexibility to achieve aggregate emission reduction goals at low cost. A central question that arises when designing a multi-pollutant cap-and-trade policy is at what levels the emission caps should be set. Principles of economic efficiency suggest that the cap on emissions of each pollutant should be set at the level where the marginal benefit of further emission reductions is equal to the marginal cost of obtaining those reductions. An alternative approach is an emission fee that is set to equal marginal emission damages at that point. This strategy has the same efficiency implications as the cap-and-trade strategy in which emission allowances are auctioned to firms, but different implications for efficiency and the allocation of rents relative to a trading program that distributes emission allowances for free (Burtraw et al., 2001a). In this paper, we seek to identify second-best efficient national emission fees for NOx and SO2 in the electricity sector. The estimates are second-best because we take as given many aspects of regulatory and fiscal policy that preclude ideal solutions, and search for the efficient fees within this institutional setting. The estimates are obtained by coupling a detailed simulation model of the US electricity markets with an integrated assessment model that links changes in emissions with atmospheric transport, environmental endpoints, and valuation of impacts. Efficient fees are found by solving the electricity model under different values for the emission fees and finding the associated value of the marginal damages associated with the resulting level of emissions for each pollutant. This methodology allows us to estimate the marginal damages and marginal abatement costs for different emission levels and then to approximate the optimal fee or range of fees where the marginal cost (emission fee) is equal to the marginal emission damages. It also allows us to estimate emissions at these tax levels. Because of the duality of the price and quantity instruments, the resulting emissions levels can be interpreted as the efficient permit caps, and can be compared to current legislative proposals. We find that the efficient emission fee for SO2 is between US$ 4700 and 1800 per tonne, which will yield 0.9–3.1 million tons of emissions in the year 2010. (All values are in 1999 dollars.) For NOx, the best estimate of the efficient emission tax lies between US$ 1200 and 700 per tonne, which yields emissions between 1.0 and 2.8 million tons. These results suggest that the emission caps included in the Bush administration and congressional proposals are within the range of emissions that can be supported by current knowledge. We also find there is substantial regional variation in the benefits achieved by reducing pollution, suggesting that a regionally differentiated policy could yield greater net benefits than a uniform national policy.

The ongoing policy debate surrounding recent congressional proposals to cap emissions of multiple pollutants, including SO2 and NOx, from the electricity sector begs the question of the level at which these emissions should be capped. From the perspective of economic efficiency, the answer is that level at which the marginal benefits of further emission reductions are offset by the marginal costs. We use the Haiku electricity model and the TAF integrated assessment model to identify these levels. We find that the efficient emission fee for SO2 is between US$ 4700 and 1800 per tonne, which will yield between 0.9 and 3.1 million tons of emissions in the year 2010. For NOx, the best estimate of the efficient emission tax lies between US$ 1200 and 700 per tonne, which yields emissions of between 1.0 and 2.8 million tons. In comparison, the emission targets of the Bush administration and Jeffords proposals are in the higher end of the range estimated by our research for SO2, and closer to the middle of the range for NOx. In general, our results suggest the emission caps included in the congressional and administration proposals are within the range of emissions that can be supported by current knowledge. Indeed, we believe our research suggests that the most important differences between these bills may not be the level of the caps, where there is little to argue about, but in other differences not modeled here, such as timing, treatment of CO2, and additional technology-based standards that restrict trading. Reductions in SO2 emissions are achieved through a mix of responses to the emissions fee, including fuel switching among types of coal and from coal to natural gas, increased retrofitting of existing coal-fired capacity with SO2 scrubbers, and a small reduction in electricity demand. Most of the emission reductions for complying with the efficient NOx cap come from installing post-combustion controls, the majority of which is SCR. Considered individually, there is little fuel switching that results from the NOx fees. When considered in tandem, the efficient policies lead to an increase in average electricity price of 4% and total electricity demand decreases by about 1%. The fuel switching to natural gas and the small reduction in electricity demand, most of which is attributable to the SO2 fee, produces ancillary reductions in CO2 emissions of almost 5% of baseline levels in 2010 under the efficient policy. Our findings are subject to three important caveats. First, as noted previously, we estimate only the static efficiency for a single point in time (2010), rather than an optimal path over time. Second, we do not include restrictions on mercury emissions in the analysis and these restrictions are included in both legislative proposals. Imposing caps on mercury will change the opportunity costs of reducing emissions of both pollutants. For SO2, the costs will tend to shift down and this suggests that the optimal level of the SO2 cap could be even lower than suggested here when mercury restrictions are taken into account. Third, we also do not consider the effects of a constraint on CO2 emissions, which is a feature of the Jeffords bill. Because there are no post-combustion control options for reducing CO2, a constraint on CO2 emissions would lead to more fuel switching from coal to natural gas. For SO2, we suspect that introducing a CO2 cap would lower the opportunity costs of control and, consequently, the level of the optimal cap below that indicated in this analysis. Our results suggest two potential modifications of basic national cap-and-trade programs, modifications that are, to some extent, present in the two main proposals. The first is a finer geographic resolution to the trading program. We find there is substantial regional variation in the benefits per tonne that are achieved by reducing pollution, suggesting that a regionally differentiated policy could yield greater net benefits than a uniform national policy. In a national policy, pollution permits trade at a one-to-one ratio; in a regionally differentiated policy, region-specific permits would trade within the region at a one-to-one ratio, but across regions at a ratio set to the estimated ratio of marginal benefits (damages from pollution). For example, as shown in Fig. 3, western sulfur permits might trade in a three-for-two ratio with eastern permits. In contrast, the Bush and Jeffords proposals each have separate regions for one or another of the pollutants, but do not include trading across regions.21 Nonetheless, our analysis suggests that the efficient national emissions cap produces significant decreases in both nitrate and sulfate particulate concentrations in every state compared to the baseline. The second potential modification is a hybrid tax and permit policy. As shown in Fig. 2a, the marginal costs of sulfur abatement around the efficient point are very steep. In such a setting, taxes are more efficient than cap-and-trade mechanisms when there is some uncertainty in the marginal cost of abatement (Weitzman, 1974), which is very likely over the large range of abatement contemplated. However, cap-and-trade policies are generally more realistic measures politically. A hybrid mechanism that allocates permits and then allows additional taxed emissions beyond the permit level (Roberts and Spence, 1976), would achieve both advantages.22 It would also prevent ruinously high costs to industry in the event that the marginal cost curve is understated. Such a hybrid mechanism is included in the Bush proposal. Even without such embellishments, the tradable permits for SO2 introduced in the 1990 Clean Air Act Amendments have brought air pollution policy closer to an efficient, least-cost way to achieve a given pollution target. Our research suggests that tightening those targets and introducing a national aggregate cap for NOx, along the magnitudes suggested in the current debate, would come close to achieving an efficient level of pollution as well