عنوان انگلیسی
How Big is the Crowding-Out Effect of User Fees in the Rural Areas of Ethiopia? Implications for Equity and Resources Mobilization
دانلود فوری مقاله + سفارش ترجمه 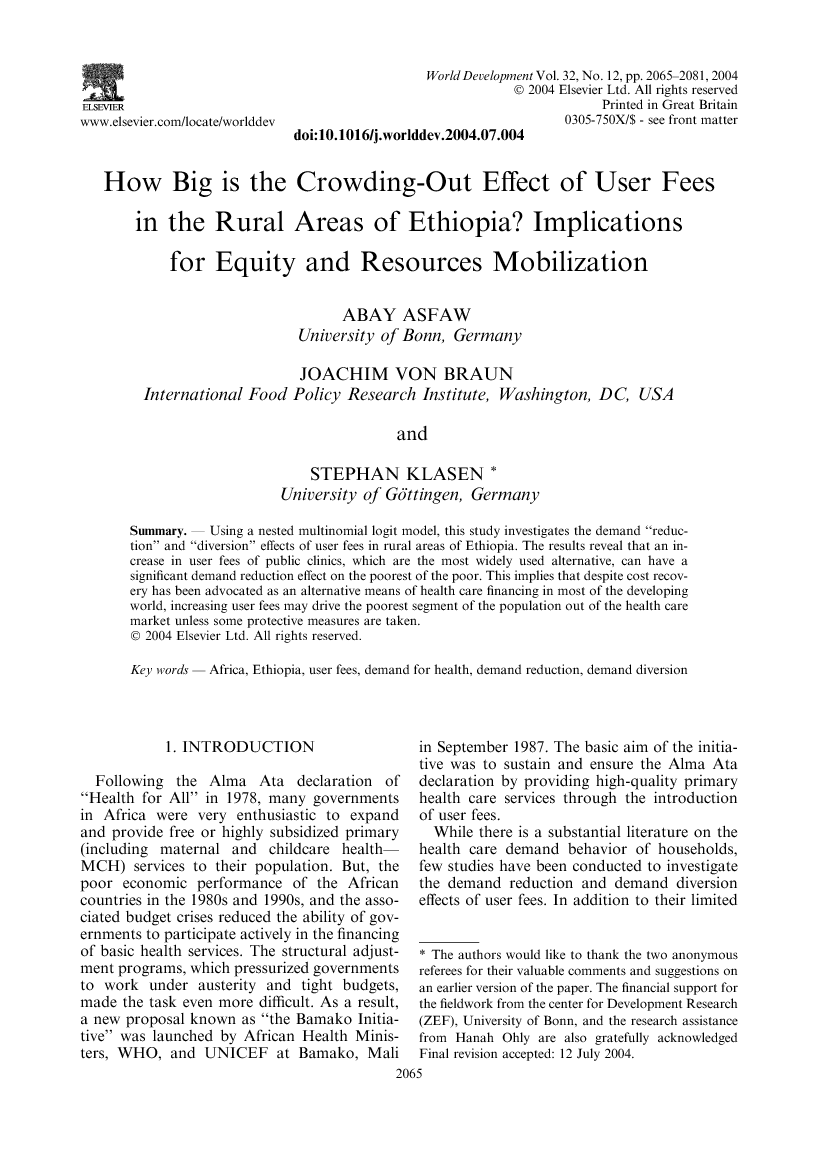 Using a nested multinomial logit model, this study investigates the demand “reduction” and “diversion” effects of user fees in rural areas of Ethiopia. The results reveal that an increase in user fees of public clinics, which are the most widely used alternative, can have a significant demand reduction effect on the poorest of the poor. This implies that despite cost recovery has been advocated as an alternative means of health care financing in most of the developing world, increasing user fees may drive the poorest segment of the population out of the health care market unless some protective measures are taken.

Following the Alma Ata declaration of “Health for All” in 1978, many governments in Africa were very enthusiastic to expand and provide free or highly subsidized primary (including maternal and childcare health—MCH) services to their population. But, the poor economic performance of the African countries in the 1980s and 1990s, and the associated budget crises reduced the ability of governments to participate actively in the financing of basic health services. The structural adjustment programs, which pressurized governments to work under austerity and tight budgets, made the task even more difficult. As a result, a new proposal known as “the Bamako Initiative” was launched by African Health Ministers, WHO, and UNICEF at Bamako, Mali in September 1987. The basic aim of the initiative was to sustain and ensure the Alma Ata declaration by providing high-quality primary health care services through the introduction of user fees. While there is a substantial literature on the health care demand behavior of households, few studies have been conducted to investigate the demand reduction and demand diversion effects of user fees. In addition to their limited methodological scope, most of the studies do not take user fees as an explanatory variable in determining both the demand for treatment (given illness/injury) and the provider choice (given the decision to obtain treatment) and do not investigate the impact of a rise in user fees on the poorest of the poor. As a result, very little is known about the “crowding out” effects of user fees, especially on the poorest of the poor in the rural areas of developing countries. This study, by rigorously analyzing the health care demand behavior of households in rural areas of Ethiopia, tries to investigate how poor households respond to changes in user fees at different health care providers. Ethiopia is taken as a case study for the following reasons. First, Ethiopia is among the poorest countries of the world and thus affordable health care is of particular concern there. Second, very few studies on this topic have been conducted in the country. Most of these few studies also concentrate on factors that affect the incidence and duration of illness, determinants of health care utilization and provider choice (including maternity care), health care expenditure pattern, impact of farmer’s health on their productivity, and the like.1 As a result, their analysis on the impact of user fees on the health care demand behavior and provider choice of households is sketchy.2 Third, increasing user fees has been advocated as one source of finance to provide efficient and sustainable primary health services in the country. Especially after the recent health reform program, cost sharing has been considered as an important instrument for sustainable health care development in the country (Russell & Abdella, 2002). For instance, the health care and financing strategy of the Federal Democratic Republic of Ethiopia states that Health services at government health facilities will be based on a cost-sharing principle between the provider (government) and the receiver (client). Therefore user-fee charges need to be revised… (FDRE, 1998, p. 4). Because of this and other market reform measures,3 the price of health services has increased significantly in the country. For instance, during 1974–84, the price rise in the health care sector was 93.7% compared to a rise in the overall consumer price index of 147%. During 1984–94, however, the price rise in the health care sector was 232.6% compared to the general price rise of 130.5% (CSA). Fourth, health insurance schemes, both formal and informal, hardly exist in the country. The major sources of health care finance in the country are still the government (through tax revenue), the private sector (through out-of-pocket payments), and foreign aid. According to the World Bank Social Sector Report (World Bank, 1997), the financial contribution of health insurance to the health sector of the country was only 0.2 and 0.5% in 1986 and 1996, respectively. Therefore, given the current debate on increasing user fees in the country and given the absence of strong formal and informal health insurance schemes to protect the poor in the state of rampant poverty, Ethiopia is a good case study from which to draw lessons on the impact of user fees especially on the poorest of the poor.

Due to a poor economic performance, a high population growth rate and other factors, governments in sub-Sahara African countries could not meet the 1978 Alma Ata declaration of “health for all by the year 2000.” As a result, especially after the Bamako Initiative of 1988, new financing mechanisms such as user fees have been advocated as a means to provide and expand sustainable primary health services. There is no consensus however about the impact of user fees on the health care demand behavior of households, especially on the poor and the socially disadvantaged part of the population. This article, by rigorously analyzing the health care demand behavior of households in the rural areas of Ethiopia, investigates the “demand reduction” and “demand diversion” effects of user fees on the poorest of the poor. The overall results show that user fees have a very strong negative impact on the utilization of health care services. More specifically, the nested multinomial logit results reveal that user fees hit the poor hard and the poor are more sensitive to the user fees of public health clinics than to any other modern health care provider. The results also show that a price rise in the public clinics has the highest demand “reduction” effects on the poorest of the poor. For instance, a 10% rise in the user fees of public clinics increases the probability of the richest quartile to withdraw from the health care market (to self-care) by 1.67% but by 2.55% in the case of the poorest of the poor (lowest quartile). These results cast doubt on the recent argument in the country and elsewhere in the developing world that more resources can be generated for the health sector by increasing user fees without negatively affecting the decision of households to seek medical care. The results clearly indicate that given the absence of health insurance schemes in the rural areas of most developing countries, policies designed to generate additional resources by increasing user fees may not be achieved without significantly crowding the poorest segment of the population out of the health care market. This, in turn, may aggravate the existing inequalities in access to basic health care services and may push the poor in to the “downward spiral of poverty” by reducing their productive capacity. Therefore increasing user fees, especially at facilities frequently visited by the majority, should not be taken as a feasible means of generating additional resources without taking appropriate measures (such as community health insurance schemes) to protect the poor and the socially disadvantaged groups of the population.