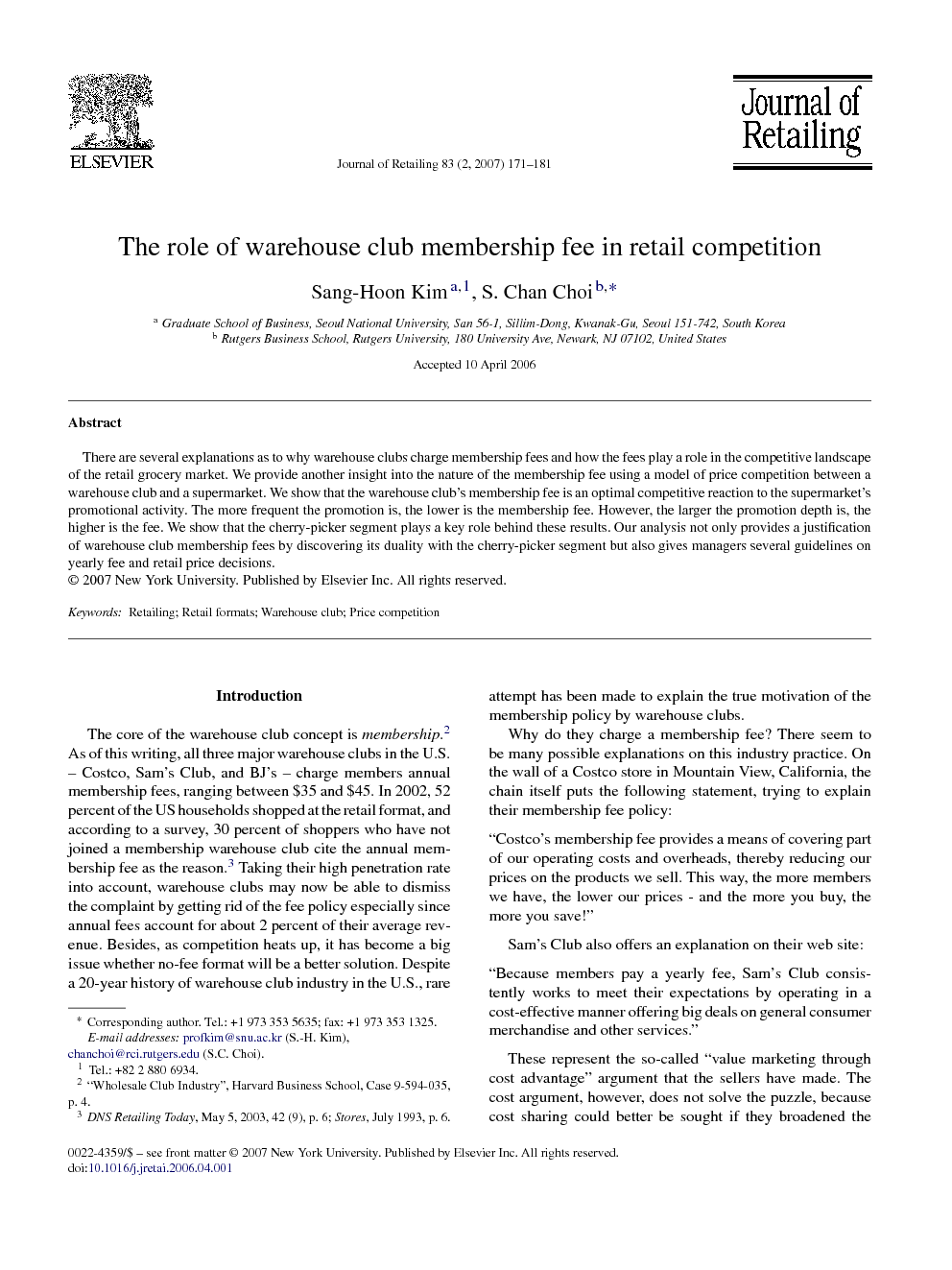 This paper examines the nature of competition between two retail formats: the warehouse club and the supermarket. In particular, we provide a complementary explanation for the existence of the warehouse club membership fee. In our duopoly model, the “extra travel cost” to a warehouse club by consumers is assumed heterogeneous. The consumer trade-off between extra costs of shopping at the warehouse club (which include inventory holding cost from the bulk purchase and the membership fee) and its lower retail price is the key driver of our demand function. The warehouse club determines its retail price and membership fee, whereas the supermarket determines its own retail price. We assume that the supermarket's promotion depth and frequency are externalities. Among the warehouse club members are the “cherry pickers” who will buy at the supermarket when the item is on sale. However, nonmembers do not have such option, and they must make all purchases at the supermarket. In our framework, the warehouse club's membership fee is an optimal competitive reaction to the supermarket's promotional activity. That is, when the supermarket offers positive, but not excessive, promotional discounts, the warehouse club finds it optimal to charge a positive membership fee. Moreover, the condition for a positive membership fee is also the condition that results in a positive cherry-picker segment. The membership fee creates the “back-yard” customer segment for the warehouse as well as the cherry-picker segment. Our model shows that the paid membership is justified only when the supermarket adopts a promotion policy. The fee becomes zero when either Δ = 0 or λ = 1 − h(k − 1)/2qΔ (Eq. (15)). Δ = 0 indicates no promotion policy by the supermarket, and λ = 1 − h(k − 1)/2qΔ implies too frequent promotion approaching the “every day low pricing (EDLP)” policy. Trade literature, however, reports that every supermarket somehow needs to offer a degree of promotion activities. According to Progressive Grocer (1994), even EDLP supermarkets cannot avoid promotion to vie with other retailers. “Industry observers say there are few if any companies running pure EDLP programs anymore, and most mix in special to make for a better merchandising appeal to their shoppers …” In deriving the equilibrium solution, therefore, we assume that both the promotional depth (Δ) and its frequency (λ) are fixed. After all, our focus is to provide an alternative explanation for the membership fee. Our analysis not only provides a good explanation on why warehouse clubs charge membership fees but also gives managers several guidelines on yearly fee and retail price decisions. The results of comparative statics tell us the following. First, the optimal yearly fee increases with the supermarket's promotion depth, and with the buyer's annual consumption. However, it decreases with the promotional frequency, bulk package size, and the consumer inventory holding cost. Second, the warehouse club should lower its retail price for more frequent supermarket promotion and a larger consumer inventory cost. However, its retail price decreases for greater promotion depth and higher demand. The supermarket's retail price generally moves in the opposite direction, except for the promotional depth. Lastly, we can think of an issue of why supermarkets do not imitate the fee policy. In fact, many supermarkets have fought back with membership club concept. For example, H.E. Butt, the dominant supermarket chain in south-central Texas, introduced a club-like format called Bodego, which features institutional sizes of grocery items and a frozen-food locker in 1992. In 1993, another club-like format supermarket called PriceRite was introduced by Big V supermarkets in Fishkill, N.Y. Megafood Stores, based in Mesa, Ariz., also competes against clubs by maintaining large sections of club-pack items (Chain Store Age Executives, January 1993). However, the common denominator of these club-like supermarkets is that they do not charge an annual fee. Very recent Californian examples of Lucky Reward membership and Safeway club membership confirm the fact that supermarkets cannot afford to introduce a positive annual membership fee though they can imitate the club-like format such as bulk packaging, wider store, and less assortment. One of the inherent problems with supermarkets is that they cannot target only part of customers in their limited business region. Rather, they should develop hyper-segmentation schemes that can address different segments with different marketing mix elements. As Lal and Rao (1997) pointed out, both EDLP and Hi-Lo supermarkets attempt to attract time constrained consumers and cherry pickers alike, though using different elements of the marketing mix, that is, price and service. Therefore, from a supermarket's point of view, giving away a customer segment (especially when it is of substantial size) by charging a fixed fee would not be justified, whereas a warehouse club that covers much broader area needs to do so in order to collect the huge capital investment in its early stage.