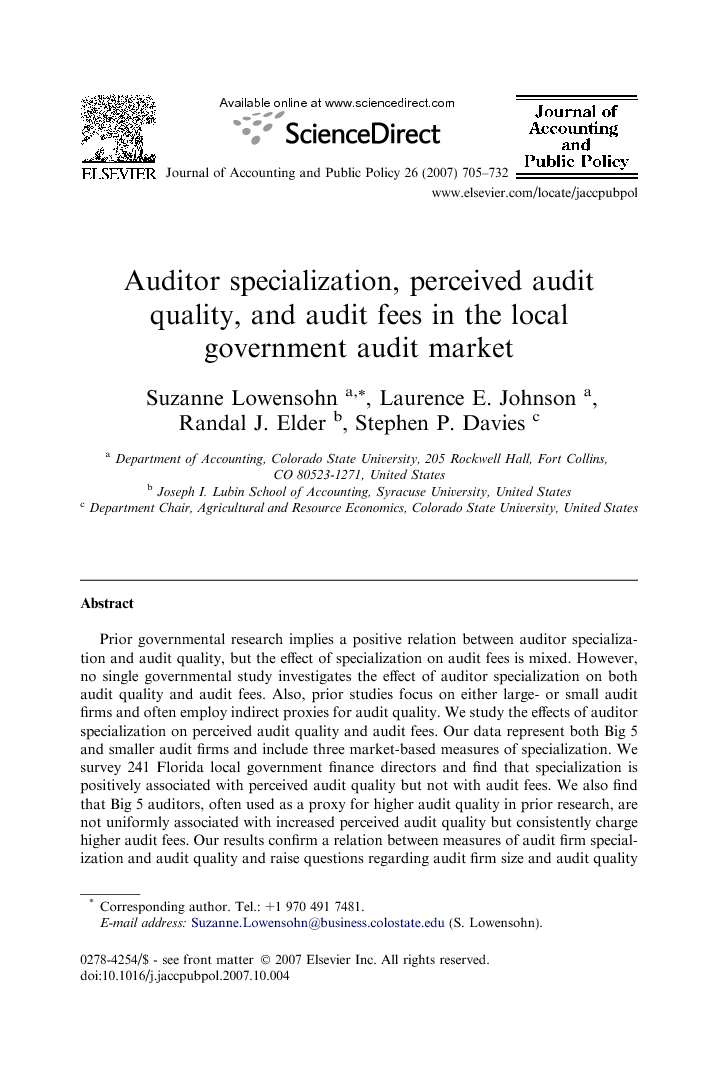 Policy suggests that governments should endeavor to obtain high-quality audits at reasonable cost (Gauthier, 2005 and GAO, 1987), but the extent to which this objective is met in practice is unknown due to limited existing research findings. Prior studies of the effect of auditor specialization on governmental audit quality reveal a positive relation between specialization and quality; however these studies often omit segments of the audit market by focusing on only Big 5 firms or non-Big 5 firms and do not consider the effects of audit fees. While Elder (1997) argues that cost considerations are also relevant to the auditor appointment decision, the available evidence concerning the effect of auditor specialization on government audit fees is limited, inconsistent, and does not incorporate measures of audit quality. In sum, the extant literature provides incomplete guidance to government officials charged with optimizing auditor procurement decisions. We report a study of the effects of auditor specialization on perceived audit quality and audit fees in a competitive market in which specialized audit firms play a considerable role. Our study employs continuous, market-based measures of specialization rather than relying on ad hoc definitions of government audit “specialists” used in previous studies. We survey 241 finance directors of Florida local governments regarding their perceptions of the quality of the audit their government received. We also obtain data on audit fees and other audit-related control variables. We find that auditor specialization is positively related to perceived audit quality but unrelated to audit fees. In contrast, controlling for specialization, our results indicate that Big 5 auditors are not associated with differential perceived audit quality yet charge premium audit fees.1 Our findings substantiate Jensen and Payne’s suggestion (2005) that specialized auditors provide high-quality audits at reduced fee levels and are consistent with Copley’s observation (1991) that non-Big 5 firms provide high-quality service in the public sector. The policy implication of our study is that governments may be best served by retaining a specialized audit firm. The remainder of this paper is organized as follows. The next two sections provide the background for the study and research model development, while the fourth section addresses the research method. The last section of the paper presents the study’s results and our discussion and conclusions.