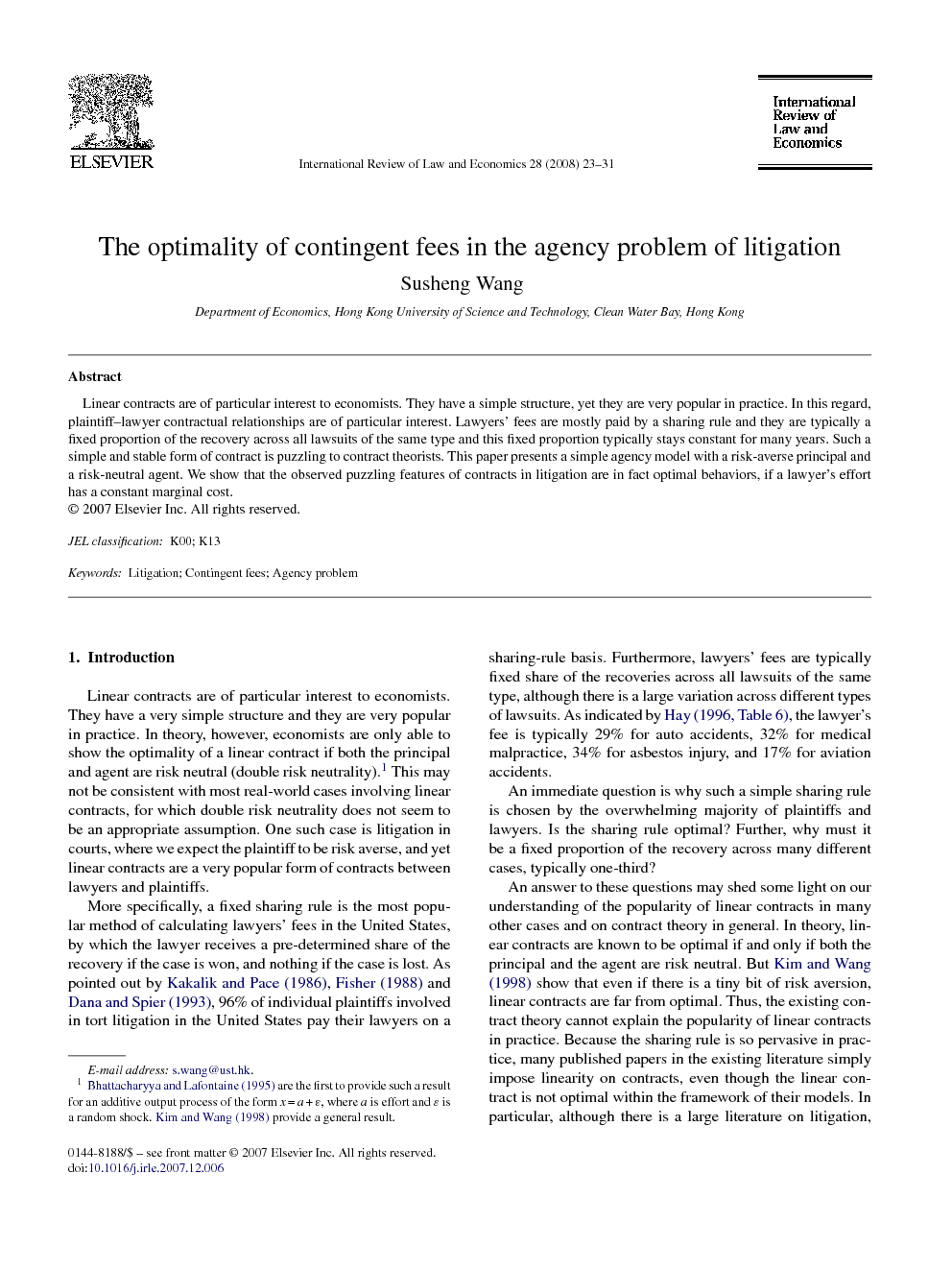 Linear contracts are of particular interest to economists. They have a simple structure, yet they are very popular in practice. In this regard, plaintiff–lawyer contractual relationships are of particular interest. Lawyers’ fees are mostly paid by a sharing rule and they are typically a fixed proportion of the recovery across all lawsuits of the same type and this fixed proportion typically stays constant for many years. Such a simple and stable form of contract is puzzling to contract theorists. This paper presents a simple agency model with a risk-averse principal and a risk-neutral agent. We show that the observed puzzling features of contracts in litigation are in fact optimal behaviors, if a lawyer's effort has a constant marginal cost.

Linear contracts are of particular interest to economists. They have a very simple structure and they are very popular in practice. In theory, however, economists are only able to show the optimality of a linear contract if both the principal and agent are risk neutral (double risk neutrality).1 This may not be consistent with most real-world cases involving linear contracts, for which double risk neutrality does not seem to be an appropriate assumption. One such case is litigation in courts, where we expect the plaintiff to be risk averse, and yet linear contracts are a very popular form of contracts between lawyers and plaintiffs. More specifically, a fixed sharing rule is the most popular method of calculating lawyers’ fees in the United States, by which the lawyer receives a pre-determined share of the recovery if the case is won, and nothing if the case is lost. As pointed out by Kakalik and Pace (1986), Fisher (1988) and Dana and Spier (1993), 96% of individual plaintiffs involved in tort litigation in the United States pay their lawyers on a sharing-rule basis. Furthermore, lawyers’ fees are typically fixed share of the recoveries across all lawsuits of the same type, although there is a large variation across different types of lawsuits. As indicated by Hay (1996, Table 6), the lawyer's fee is typically 29% for auto accidents, 32% for medical malpractice, 34% for asbestos injury, and 17% for aviation accidents. An immediate question is why such a simple sharing rule is chosen by the overwhelming majority of plaintiffs and lawyers. Is the sharing rule optimal? Further, why must it be a fixed proportion of the recovery across many different cases, typically one-third? An answer to these questions may shed some light on our understanding of the popularity of linear contracts in many other cases and on contract theory in general. In theory, linear contracts are known to be optimal if and only if both the principal and the agent are risk neutral. But Kim and Wang (1998) show that even if there is a tiny bit of risk aversion, linear contracts are far from optimal. Thus, the existing contract theory cannot explain the popularity of linear contracts in practice. Because the sharing rule is so pervasive in practice, many published papers in the existing literature simply impose linearity on contracts, even though the linear contract is not optimal within the framework of their models. In particular, although there is a large literature on litigation, the particular form and the key features of the sharing rule adopted in litigation has never been shown to be optimal in theory. This paper presents a simple agency model with a risk-averse principal (the plaintiff) and a risk-neutral agent (the lawyer). Under the assumption of a constant marginal cost of a lawyer's effort, we present four results: (1) the optimal contract is a sharing rule; (2) the share of the sharing rule is fixed, in the sense that it is independent of the recovery; (3) the share is also independent of the plaintiff's preferences, that is, the lawyer may charge the same share for all clients involved in the same type of cases; and (4) such a sharing rule is efficient (the first best). Therefore, our simple agency model explains the key features of the sharing rule in litigation. This paper proceeds as follows. Section 2 presents our agency model of litigation. Section 3 derives the results. Section 4 discusses various issues. Finally, Section 5 concludes with a few concluding remarks. All the proofs are in the Appendix.