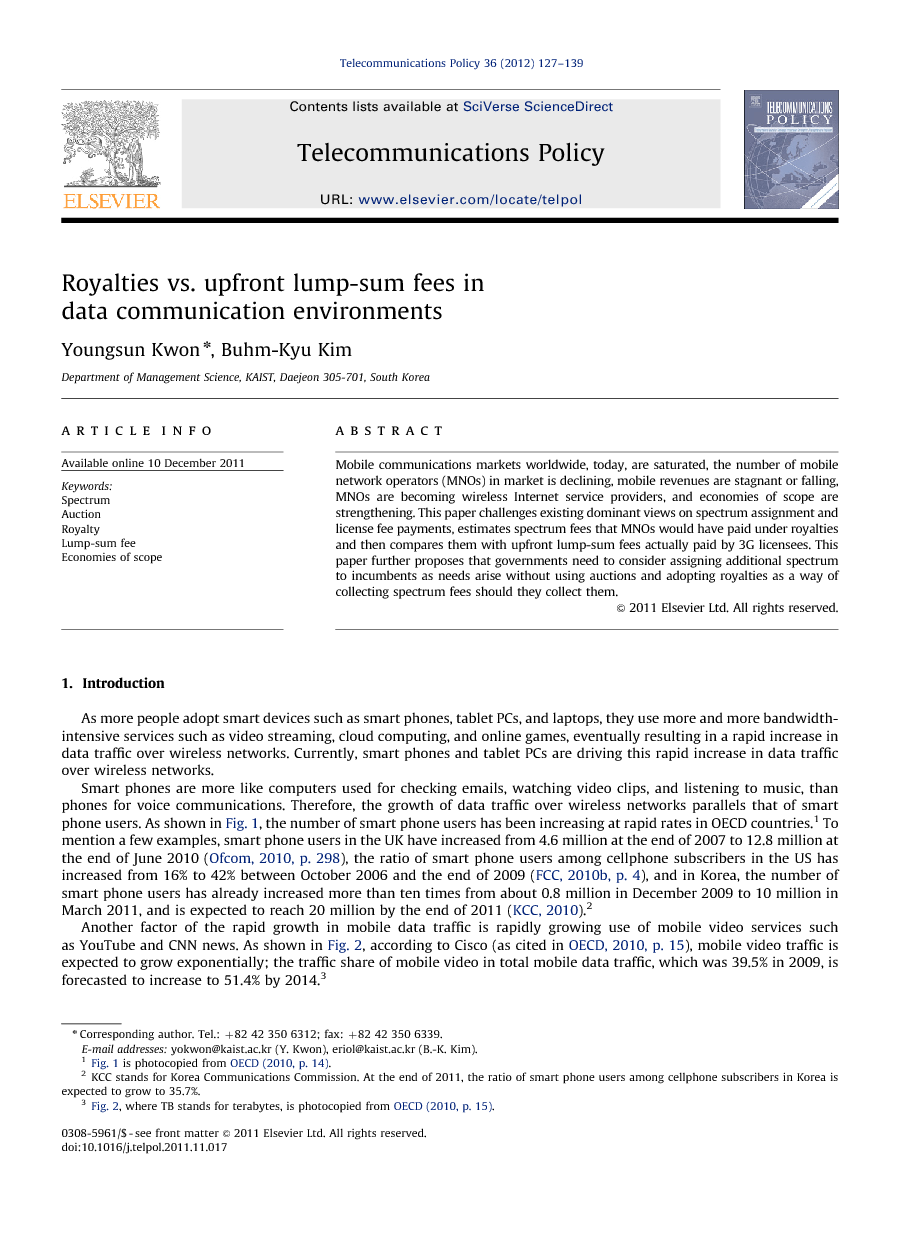 Mobile communications markets worldwide, today, are saturated, the number of mobile network operators (MNOs) in market is declining, mobile revenues are stagnant or falling, MNOs are becoming wireless Internet service providers, and economies of scope are strengthening. This paper challenges existing dominant views on spectrum assignment and license fee payments, estimates spectrum fees that MNOs would have paid under royalties and then compares them with upfront lump-sum fees actually paid by 3G licensees. This paper further proposes that governments need to consider assigning additional spectrum to incumbents as needs arise without using auctions and adopting royalties as a way of collecting spectrum fees should they collect them.

As more people adopt smart devices such as smart phones, tablet PCs, and laptops, they use more and more bandwidth-intensive services such as video streaming, cloud computing, and online games, eventually resulting in a rapid increase in data traffic over wireless networks. Currently, smart phones and tablet PCs are driving this rapid increase in data traffic over wireless networks. Smart phones are more like computers used for checking emails, watching video clips, and listening to music, than phones for voice communications. Therefore, the growth of data traffic over wireless networks parallels that of smart phone users. As shown in Fig. 1, the number of smart phone users has been increasing at rapid rates in OECD countries.1 To mention a few examples, smart phone users in the UK have increased from 4.6 million at the end of 2007 to 12.8 million at the end of June 2010 (Ofcom, 2010, p. 298), the ratio of smart phone users among cellphone subscribers in the US has increased from 16% to 42% between October 2006 and the end of 2009 (FCC, 2010b, p. 4), and in Korea, the number of smart phone users has already increased more than ten times from about 0.8 million in December 2009 to 10 million in March 2011, and is expected to reach 20 million by the end of 2011 (KCC, 2010).2Another factor of the rapid growth in mobile data traffic is rapidly growing use of mobile video services such as YouTube and CNN news. As shown in Fig. 2, according to Cisco (as cited in OECD, 2010, p. 15), mobile video traffic is expected to grow exponentially; the traffic share of mobile video in total mobile data traffic, which was 39.5% in 2009, is forecasted to increase to 51.4% by 2014.3As a result of increasing smart phone users and heavy use of streaming services, data traffic over wireless networks is skyrocketing in advanced countries. According to the FCC (2010b), world mobile data traffic is expected to grow, on average, to more than 35 times its 2009 levels by 2014. The mobile data traffic of AT&T has grown 5000% over past 3 years (FCC, 2010b). In Korea, the mobile data traffic of three mobile network operators (MNOs) have increased 100–300% since smart phones were introduced in the latter part of 2009. In the UK, mobile data traffic grew 240% between 2008 and 2009 (Ofcom, 2010, p. 283). In response to this rapid increase in data traffic, governments worldwide have put a policy emphasis on providing more spectrum and encouraging MNOs' investment in faster networks (DCMS, & DBIS, 2009, EC, 2010 and FCC, 2010a). The FCC (2010a) in the National Broadband Plan announced that it would provide 300 MHz bandwidths for wireless broadband by 2015 and additional 200 MHz bandwidths by 2020 and asked the Congress to grant the FCC power to use incentive auctions, which allow incumbent licensees of spectrum bands to obtain a portion of auction proceeds. The UK ( DCMS, & DBIS, 2009 and Ofcom, 2011b) also announced that it would auction the 800 MHz and 2.6 GHz bands for mobile communications services and proposed a policy that would allow the trading of spectrum bands currently being used for 2G and 3G mobile communications services. In addition, the UK (DCMS & DBIS, 2009, p. 15) proposed in the Digital Britain Final Report that it would “make the existing operators’ 3G licences indefinite rather than term licences…in order to provide certainty for investment…,” which means that spectrum license holders would end up acquiring full property rights over their spectrum. Basically, the ways of coping with increasing data traffic in the US and the UK are to auction additional spectrum, share auction proceeds with spectrum licensees in order to induce licensees to put up their unused spectrum for sale, and allow spectrum trading among MNOs. While the US and the UK were making spectrum assignment process more market friendly, Korea assigned additional spectrum to existing MNOs, 20 MHz each, through a traditional comparative hearing process in 2010 in order to allow them to better manage increasing data traffic over 3G networks. Exploding data traffic and other factors discussed in the next section pose a few fundamental questions associated with spectrum assignment and license fee payments. For example, spectrum auctions are effective when competition in the market is feasible and the market is growing because new entrants can easily find room for competition. However, as explored in the next section, the wireless communications industry worldwide is becoming increasingly more concentrated and saturated. The objectives of this paper are to present a different view of spectrum assignment and license fee payments, to evaluate whether 3G spectrum fees paid by UK and Korea MNOs were exorbitant, and to discuss the following three questions that arise in the context of today's rapidly changing communication environment: are auctions still a useful means to assign spectrum? are upfront lump-sum payments still a useful way of collecting spectrum fees? and should MNOs pay spectrum fees? In order to accomplish these objectives, Section 2 points out noteworthy features of the current mobile communications market that can undermine the efficacy of using auctions combined with upfront lump-sum fees. Section 3 provides a brief overview of royalties and upfront lump-sum fees and discusses the assumptions needed to implement numerical analyses for comparisons of spectrum fees under different payment methods. Using data from Korea and the UK, Section 4 calculates the range of spectrum fees that MNOs would have paid under royalties and then compares them with the upfront lump-sum fees actually paid by 3G licensees. Section 5 proposes answers to the three questions raised above and discusses alternatives as well, and Section 6 concludes the paper with a policy suggestion.

At present, mobile communications markets worldwide are saturated, the number of MNOs in the market is declining, mobile revenues are stagnant or falling, MNOs are becoming wireless ISPs, and economies of scope are strengthening. Given these volatile environments of the mobile communications market, governments worldwide are facing an important policy issue of how to facilitate continuous evolution of mobile networks and, eventually boost economic growth and job creation by transforming traditional service industries into IT-based service industries. As discussed in 4 and 5, upfront lump-sum fees can be exorbitant, reducing rather than boosting competition by increasing fixed costs and placing unbalanced fees on MNOs, and deterring a smooth transition of mobile service from 2G to 3G, and then 4G because migration to upgraded network connection service is not likely to increase revenues while it will definitely increase costs. Therefore, in order to effectively address this policy issue, the governments worldwide needs to consider assigning additional spectrum to incumbents as needs arise without using auctions and adopting royalties as a way of collecting spectrum fees should they collect them. This is because collecting spectrum fees in and of itself cannot and should not be the first objective of the governments; rather, the first objective should be promoting content and service industries on the upgraded mobile networks. In addition, it may be better to assign additional spectrum to incumbents without charging fees at all. History testifies, as has been briefly touched on this paper, that facilitating competition in the telecommunications industry through auctions and divestitures has been a dream rather than a reality. This is why Australia is establishing a monopoly that builds and operates the national broadband network on a wholesale-only open access basis (DBCDE, 2009). It is time to reconsider the validity of facility-based competition in the telecommunications industry.