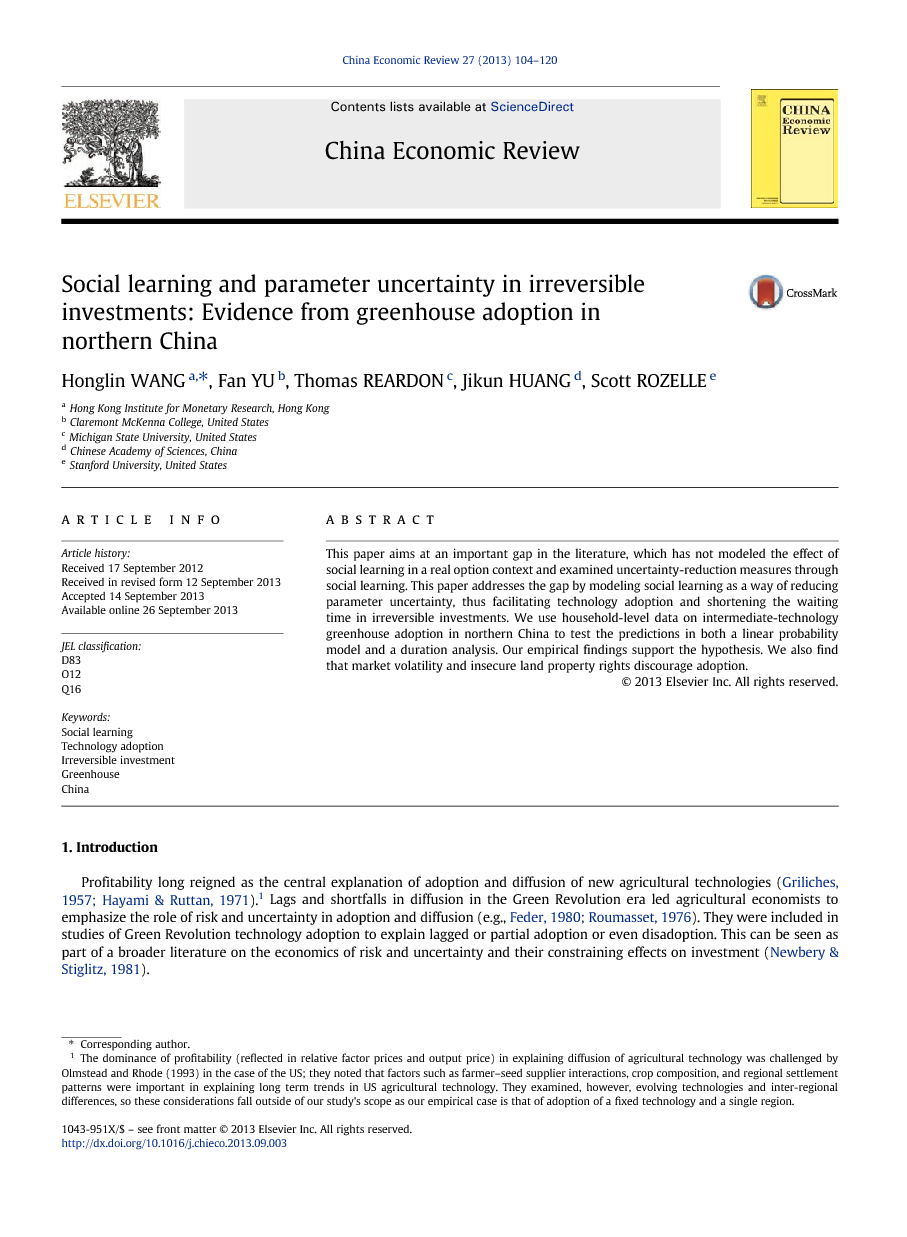 This paper aims at an important gap in the literature, which has not modeled the effect of social learning in a real option context and examined uncertainty-reduction measures through social learning. This paper addresses the gap by modeling social learning as a way of reducing parameter uncertainty, thus facilitating technology adoption and shortening the waiting time in irreversible investments. We use household-level data on intermediate-technology greenhouse adoption in northern China to test the predictions in both a linear probability model and a duration analysis. Our empirical findings support the hypothesis. We also find that market volatility and insecure land property rights discourage adoption.

Profitability long reigned as the central explanation of adoption and diffusion of new agricultural technologies (Griliches, 1957 and Hayami and Ruttan, 1971).1 Lags and shortfalls in diffusion in the Green Revolution era led agricultural economists to emphasize the role of risk and uncertainty in adoption and diffusion (e.g., Feder, 1980 and Roumasset, 1976). They were included in studies of Green Revolution technology adoption to explain lagged or partial adoption or even disadoption. This can be seen as part of a broader literature on the economics of risk and uncertainty and their constraining effects on investment (Newbery & Stiglitz, 1981). Information reduces farmers' uncertainty about the payoffs to adopting a new technology. The literature has examined the methods by which farmers receive information in order to evaluate new technologies and operate them well. These methods include receiving information from extension agents, from other farmers (“learning from neighbors”), and from their own experience (“learning by doing”) (Besley and Case, 1994 and Foster and Rosenzweig, 1995). The role of “learning from neighbors” has been further refined in recent work on “social learning”. Four recent papers exemplify this work. Conley and Udry, 2001 and Conley and Udry, 2010 model Ghana farmers' adoption of fertilizer in pineapple production, conditioned by their incomplete information and communication networks with neighbors. Bandiera and Rasul (2006) model Mozambique farmers' adoption of sunflowers conditioned by their social network (neighbors and friends who have adopted). Munshi (2004) models Indian farmers' adoption of HYV seeds of rice and wheat conditioned by neighbors' experiences. These papers demonstrate the effects of social learning on technology adoption. In most cases social learning's effect is interpreted as increasing the capacity of the farmer to adopt as well as reducing the farmer's uncertainty and perception of risk in adoption. The studies of the impacts of social learning on adoption have, up to now, focused on reversible technologies, such as the examples of those on new crops and new seeds above. But the adoption literature has not yet addressed the issue of how social learning, through its role in reducing risk and uncertainty, conditions adoption of irreversible investments in capital-embodying technology, such as tube wells and greenhouses. Irreversible investments such as building a greenhouse are characterized by the salvage value of the asset being negligible or the asset not being able to be transferred or sold. Because of incomplete information with respect to the performance, reliability, and appropriateness of agricultural equipment, irreversibility entails substantial risk for the investor (Dixit and Pindyck, 1994 and Sunding and Zilberman, 2001). The ability to delay an irreversible investment can be considered as a real option; a higher level of uncertainty regarding future benefits raises the option value and causes the investment decision to deviate from the classical NPV rule.2 Specifically, investors may rationally delay investment to gain additional information, reduce the level of uncertainty, and increase discounted expected payoffs. While investment delay in the face of uncertainty has been studied in the economics literature (Dixit and Pindyck, 1994, Hassett and Metcalf, 1995, McDonald and Siegel, 1986, Nelson and Amegbeto, 1998 and Zilberman et al., 1994), this literature has tended to assume that all parameters of the dynamic process are known to agents, and the only uncertainty in the model comes from the future value of the dynamic process. In contrast, we present a new model wherein, following McDonald and Siegel (1986), we assume that a farmer is considering an investment project, the value of which follows a geometric Brownian motion. Departing from the standard framework, we assume that the true drift of the Brownian motion is unobservable to the farmer (we call this “parameter uncertainty”). In essence, the farmer is imperfectly informed as to the expected rate of return of the farmer's investment. He/she must make an inference about the true expected return based on their information and, at the same time, determine the optimal timing for investing in the project. The farmer can learn about the unknown parameter in two ways: by extracting information on the true drift from a continuous observation of past realized returns on the project value; and by obtaining discrete noisy signals of the true drift. This latter channel represents the process of social learning from early adopters in the farmer's social network. Furthermore, we empirically model greenhouse investments with primary data collected by the authors in the Shandong province of China. We test both whether social learning induces adoption, and whether social learning shortens the waiting time until adoption, using a duration analysis. The data are multi-year, observing the characteristics, including their social network of prior adopters, of the adopters the year before their adoption. Thus, new to this literature, we capture causality of social learning and adoption. Previously, investment under parameter uncertainty has been examined in the finance literature. Gennotte (1986) studies portfolio choice under incomplete information about the stock return process. The study uses tools of nonlinear filtering to derive the optimal drift estimator as agents continuously observe the returns. Brennan (1998) and Xia (2001) construct similar models to examine how learning about unknown parameters and unknown predictability affects portfolio choice. Huang and Liu (2007) model learning from discrete noisy signals about the true drift in their study of periodic news on portfolio selection. The finance literature modeling investment under parameter uncertainty is primarily theoretical, with few empirical applications and none in the domain of investment in agricultural capital as an embodiment of agricultural technology adoption. The present paper addresses this gap in the literature. We analyze irreversible investment under parameter uncertainty, modeling the effect of social learning. The contribution to filling the gap in the literature is both theoretical and empirical. The rest of the paper is organized as follows. First, we present the theoretical model. Second, we provide background information about greenhouse technology in northern China. Third, we discuss our sample selection and summarize the data. Fourth, we explain our empirical methodology. Fifth, we present the empirical findings from linear probability models and a duration analysis. Finally, we conclude with a summary and policy implications.

In this paper, we aim at an important gap left by the existing literature, both theoretical and empirical, which has not modeled the effect of social learning in a real option context, particularly with respect to the reduction of uncertainty. We fill this gap by modeling social learning as a way of reducing parameter uncertainty, thus facilitating technology adoption and reducing the waiting time in irreversible investment. We use household-level data from intermediate-technology greenhouse adoption in northern China to test the predictions in both a linear probability model and a duration analysis, with the following main results: (1)Social learning has a significant positive impact on greenhouse adoption: 10 more adopters in the farmer's social network increase the probability of adoption by 32%, which is an economically significant effect. Moreover, results from the duration analysis confirm this finding through social learning reducing the waiting time significantly in greenhouse adoption. (2)The empirical results in both the linear probability model and the duration model confirm what we know from the conventional theory of irreversible investment: higher uncertainty about the future investment value results in less likelihood of adoption and longer waiting times. (3)Insecure land property rights discourage adoption and also increase the waiting time until the irreversible investment is made. Our paper also provides an answer to a general question: How could small farmers in developing countries deal with the risk from irreversible investment and incomplete information? Our results suggest that social learning can be one effective solution. Therefore, the policy implication from this paper is clear: when small farmers face technology adoptions such as investing in tube wells or machinery, helping several farmers adopt successfully may be the best way to induce more adoption in their village.