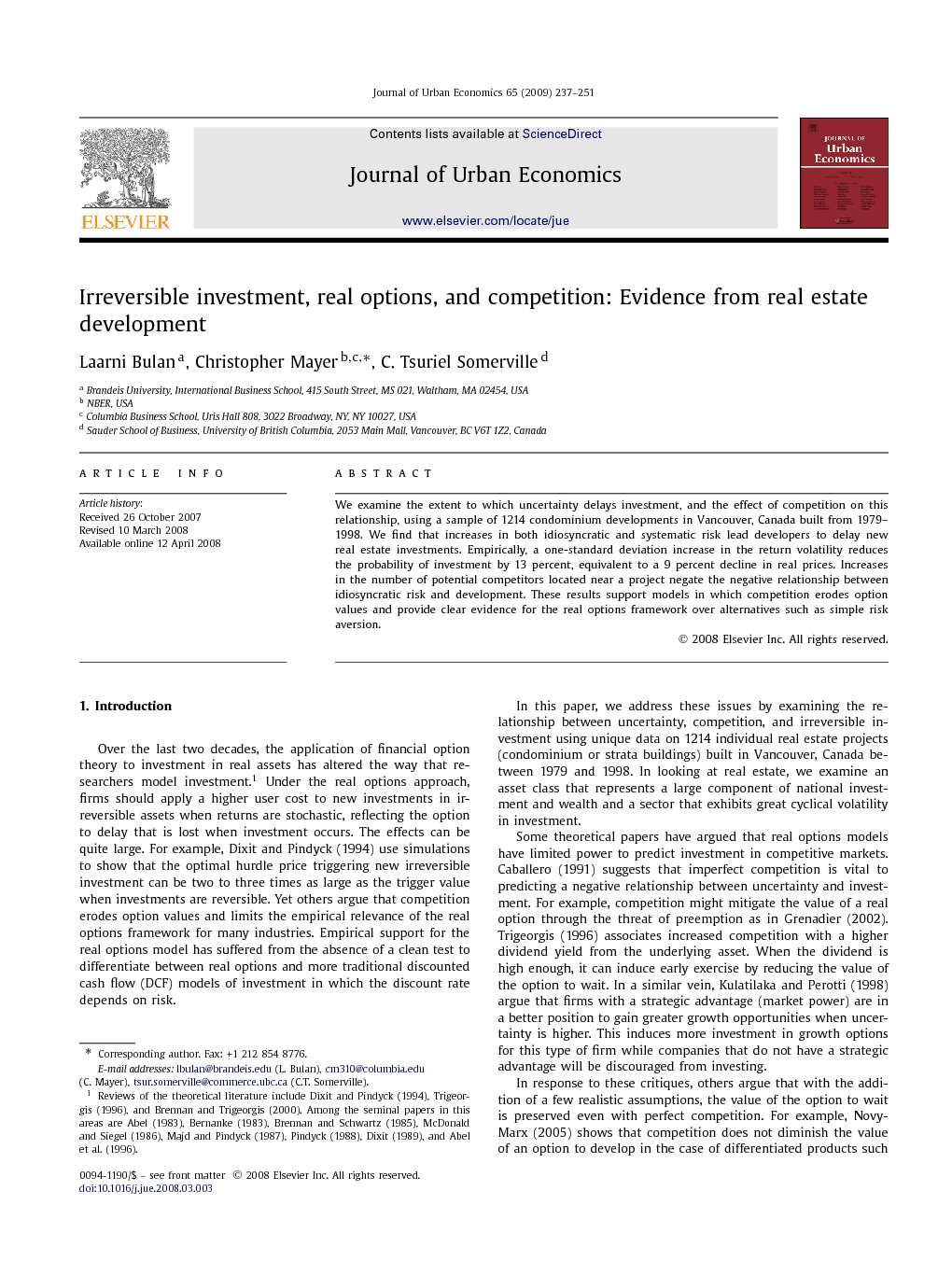 We examine the extent to which uncertainty delays investment, and the effect of competition on this relationship, using a sample of 1214 condominium developments in Vancouver, Canada built from 1979–1998. We find that increases in both idiosyncratic and systematic risk lead developers to delay new real estate investments. Empirically, a one-standard deviation increase in the return volatility reduces the probability of investment by 13 percent, equivalent to a 9 percent decline in real prices. Increases in the number of potential competitors located near a project negate the negative relationship between idiosyncratic risk and development. These results support models in which competition erodes option values and provide clear evidence for the real options framework over alternatives such as simple risk aversion.

The results in this paper support many of the conclusions from the burgeoning theoretical literature on the importance of real options and competition. Our empirical estimates suggest that builders delay development during times of greater idiosyncratic uncertainty in real estate prices and when the exposure to market risk is higher. These findings hold across different time periods. The impact of volatility in our sample is large and statistically significant in most specifications. A one standard deviation increase in condominium return volatility leads to a 13 percent decline in the hazard rate of investment, the same effect as a 9 percent decline in prices. Similarly, our estimates suggest that the hazard rate falls 8 percent when exposure to systematic risk increases by one standard deviation. We also show that competition significantly reduces the sensitivity of option exercise to volatility. Increases in competition appreciably decrease the coefficient on volatility in our hazard rate specification. In fact, volatility has no estimated effect on option exercise for the 5 percent of our sample with the largest number of potential competitors. This finding is fully consistent with Caballero (1991), Trigeorgis (1996) and Grenadier (2002) who argue that competition diminishes the value of waiting to invest. The erosion in value of the investment opportunity due to one’s competitors creates incentives to invest earlier. Hence competitive firms are not able to capture the full benefits to waiting that a monopolist has. This result supports the real options model because the interaction between competition and volatility should not affect the user cost of a reversible investment. This provides clearer evidence in favor of the real options model rather than the alternative that risk averse developers choose not to build at times of greater uncertainty. From a policy perspective, these results have important implications for understanding real estate cycles. An often-repeated claim in the real estate industry is that overbuilding in the real estate industry is due to irrational developers. Grenadier (1996) has suggested a rational basis for the bursts of construction that sometimes occur just as market prices begin to fall, strategic behavior by competing developers in imperfectly competitive markets. We find some evidence in favor of the Grenadier model; holding the level of prices constant, builders appear more likely to build when prices begin to fall. More compelling, however, is the observation that the volatility of returns, exposure to market risk, and competition play important roles in the timing of investment. Builders are especially susceptible to business cycle shocks, as developer bankruptcies rise considerably in recessions. If competition is less pronounced in recessions, real options behavior may lead developers to delay irreversible investments in structures longer than they would in booms when markets are more competitive. Given that changes in investment are an important component in the business cycle, these results suggest that uncertainty and competition may play a role in understanding cyclical movements in investment in real estate and the macro economy.