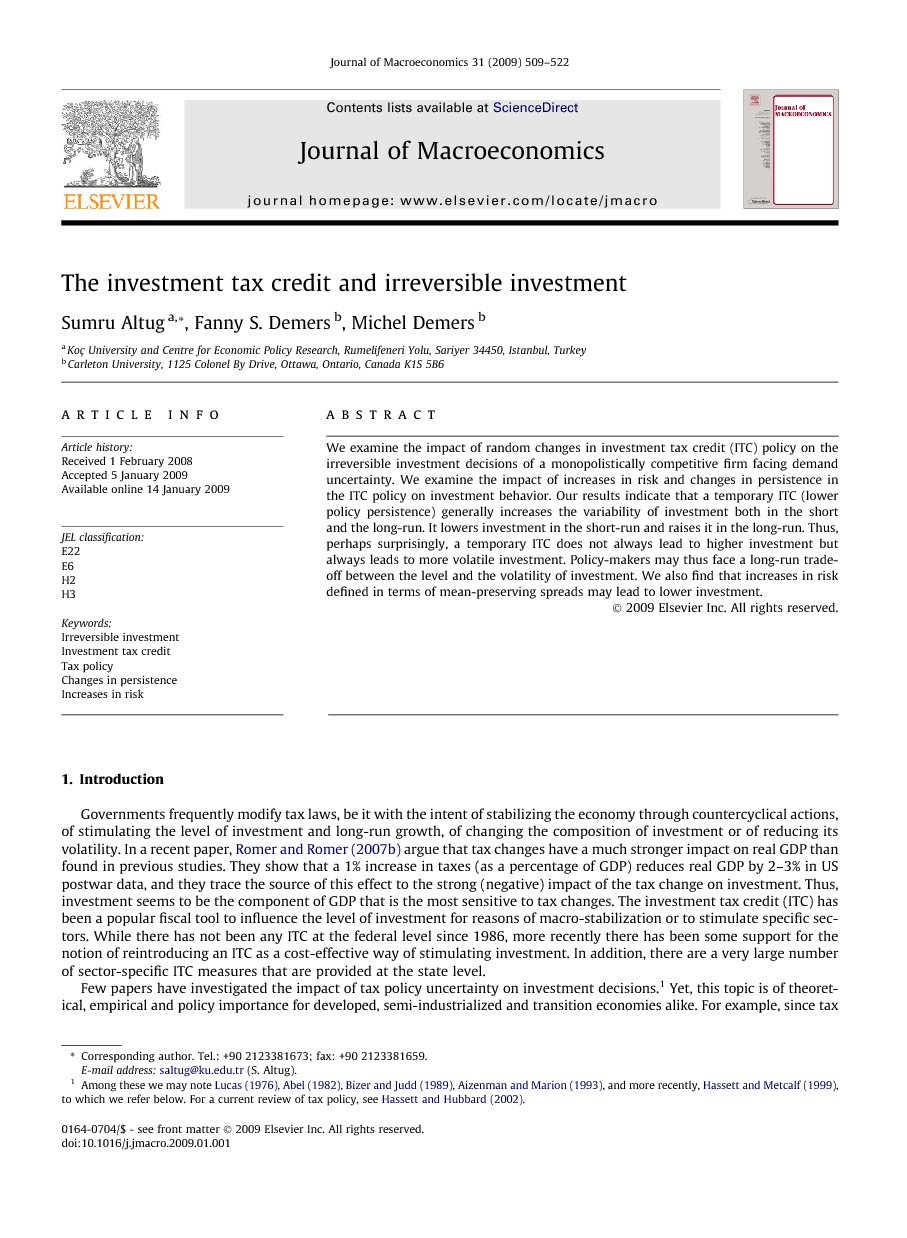 We examine the impact of random changes in investment tax credit (ITC) policy on the irreversible investment decisions of a monopolistically competitive firm facing demand uncertainty. We examine the impact of increases in risk and changes in persistence in the ITC policy on investment behavior. Our results indicate that a temporary ITC (lower policy persistence) generally increases the variability of investment both in the short and the long-run. It lowers investment in the short-run and raises it in the long-run. Thus, perhaps surprisingly, a temporary ITC does not always lead to higher investment but always leads to more volatile investment. Policy-makers may thus face a long-run trade-off between the level and the volatility of investment. We also find that increases in risk defined in terms of mean-preserving spreads may lead to lower investment.

In this paper we have investigated the impact of changes in persistence and volatility of the ITC on the irreversible investment decisions of firms. We have first assumed that the ITC follows a three-state (high/medium/low) Poisson process. In a context of certainty, the impact of a larger ITC depends on whether it is temporary or permanent. A temporary ITC is typically expected to have a greater impact because it induces an intertemporal reallocation of investment. In a context of uncertain ITC policy, we examined the impact of the permanence of an ITC by investigating how changes in the persistence of tax incentives affect investment. We showed theoretically that more temporary ITCs (lower policy persistence) lead to greater variability of investment. In addition, using numerical simulations, we also showed that more temporary ITC’s do not always lead to higher investment, but always lead to greater variability. Thus, when setting the ITC, policy-makers may face a dilemma since there may be a long-run trade-off between higher versus more stable investment. Considering the impact of increases in risk in the ITC our simulation results show that when the firm faces uncertainty not only with respect to the timing of the change in the ITC (as in the two-state Poisson model), but also with respect to the direction and magnitude of the change in the ITC, greater randomness in the ITC in the sense of a mean-preserving spread lowers investment. We then considered an alternative non-Poisson third order Markovian process for the ITC where the ITC state is duration-dependent: the longer a given ITC state has been in place, the lower the probability of remaining in that state. In this setting, when policy changes, the probability of another immediate change is low but it increases as time passes. Our simulations with this model confirmed our conclusions for the Poisson model with respect to the impact of policy persistence and volatility. We have ignored general and market equilibrium considerations and have assumed a myopic type of behaviour on the part of firms. However, our approach is supported by Smit and Ankum (1993), Leahy (1993) and Grenadier (2002).27 In a model of competitive interactions among firms Leahy has shown that myopic firms that ignore the impact of other firms’s actions result in the same critical boundaries that trigger investment as a model in which firms correctly anticipate the strategies of other firms. Grenadier (2002) has extended Leahy’s principle of optimality of myopic behavior to a dynamic oligopoly under uncertainty. We have not analyzed the possible feedback between aggregate investment and ITC policy. If the ITC is raised, succeeding in stimulating aggregate investment more than policy-makers anticipated, the government may wish to alter the ITC in future periods. However, firms anticipating this time-inconsistency will expect the government’s reaction and react accordingly, thus reducing the initial expansionary effect of the ITC.28 Our paper has ignored this feedback, a full exploration of which will require a separate investigation. We also have abstracted from time-to-build in investment. Since investment in structures is often characterized by time to build, it would be interesting to examine ITC policy in this context.