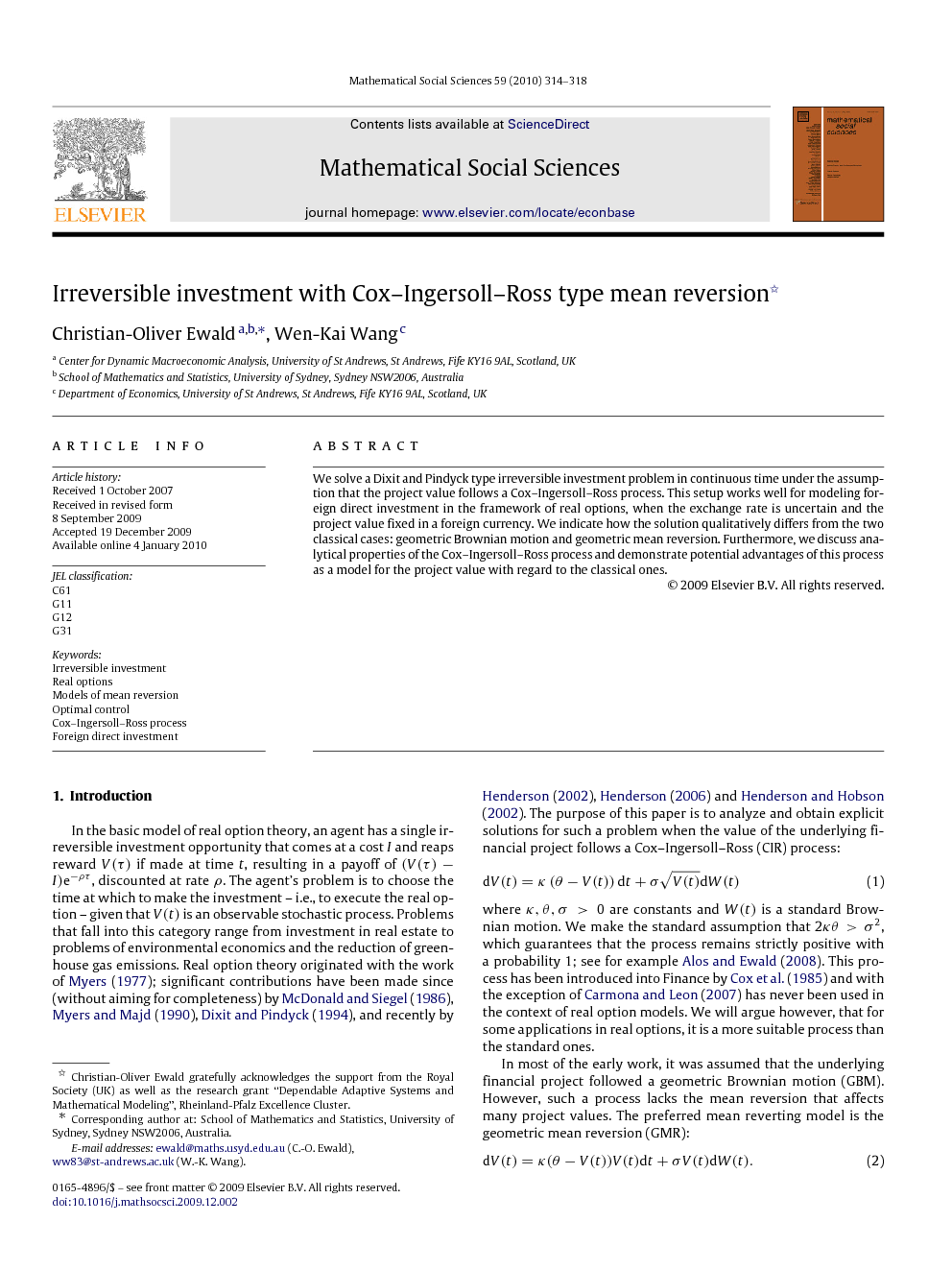 We solve a Dixit and Pindyck type irreversible investment problem in continuous time under the assumption that the project value follows a Cox–Ingersoll–Ross process. This setup works well for modeling foreign direct investment in the framework of real options, when the exchange rate is uncertain and the project value fixed in a foreign currency. We indicate how the solution qualitatively differs from the two classical cases: geometric Brownian motion and geometric mean reversion. Furthermore, we discuss analytical properties of the Cox–Ingersoll–Ross process and demonstrate potential advantages of this process as a model for the project value with regard to the classical ones.

In the basic model of real option theory, an agent has a single irreversible investment opportunity that comes at a cost I and reaps reward V(τ) if made at time t, resulting in a payoff of (V(τ)−I)e−ρτ, discounted at rate ρ. The agent’s problem is to choose the time at which to make the investment–i.e., to execute the real option–given that V(t) is an observable stochastic process. Problems that fall into this category range from investment in real estate to problems of environmental economics and the reduction of greenhouse gas emissions. Real option theory originated with the work of Myers (1977); significant contributions have been made since (without aiming for completeness) by McDonald and Siegel (1986), Myers and Majd (1990), Dixit and Pindyck (1994), and recently by Henderson (2002), Henderson (2006) and Henderson and Hobson (2002). The purpose of this paper is to analyze and obtain explicit solutions for such a problem when the value of the underlying financial project follows a Cox–Ingersoll–Ross (CIR) process: equation(1) dV(t)=κ(θ−V(t))dt+σ√V(t)dW(t) where κ,θ,σ>0 are constants and W(t) is a standard Brownian motion. We make the standard assumption that 2κθ>σ2, which guarantees that the process remains strictly positive with a probability 1; see for example Alos and Ewald (2008). This process has been introduced into Finance by Cox et al. (1985) and with the exception of Carmona and Leon (2007) has never been used in the context of real option models. We will argue however, that for some applications in real options, it is a more suitable process than the standard ones. In most of the early work, it was assumed that the underlying financial project followed a geometric Brownian motion (GBM). However, such a process lacks the mean reversion that affects many project values. The preferred mean reverting model is the geometric mean reversion (GMR): dV(t)=κ(θ−V(t))V(t)dt+σV(t)dW(t). However, it is absorbing at its lower bound of 0 and its property that the mean reversion speed is proportional to the project value, is not always reasonable. In contrast, the CIR process guarantees a positive project value, has a constant mean reversion speed and is not absorbing at 0. Furthermore, unlike GMR, the CIR process is truly centered around the mean reversion level, in the following sense. Taking expectations in (1) shows that the expectation e(t)≔E(V(t)) satisfies the ordinary differential equation (d/dt)e(t)=κ(θ−e(t)). The solution is equation(4) e(t)=θ+(V0−θ)e−κt and therefore limt→∞e(t)=θ. As shown in Ewald and Yang (2007), the distribution of the GMR process is instead shifted away from the mean reversion level: limt→∞egmr(t)=θ−σ2κ. Taking GMR as an underlying model, the mean reversion parameter θ can hence not be interpreted as an average price/cost in the long run. Metcalf and Hasset (1995) present an empirical study which is mainly pro GMR as an underlying in a real option model, as compared to GBM. However, Metcalf and Hasset reflect on commodity prices only. In the context of interest and currency exchange rates, GMR can be easily rejected by means of data. Here CIR takes an eminent role and empirical studies underline this. We do not wish to argue at this point, that CIR is a more realistic model for commodity prices than GMR, but present the following hypothetical example of foreign direct investment. An agent wishes to (irreversibly) invest in a project in a foreign country. The project itself is relatively safe, so we assume its value in foreign currency is fixed at level p. However, the agent thinks in terms of domestic currency, and therefore the price he/she needs to pay at the time of investment is pV(τ) where V(τ) is the exchange rate at time τ. This leads directly to an irreversible investment model, with CIR as the underlying. Carmona and Leon (2007) have also considered CIR in an irreversible investment context. In their exposition the project value is fixed as above and the agent has to reflect on stochastic interest rates, which are assumed to be CIR. Since the present value of the project depends on accumulated rather than spot interest rates (as opposed to the foreign currency example above) the underlying in Carmona and Leon is basically an accumulated CIR ∫τ0V(s)ds leading to an affine term structure, which makes their analysis significantly different from ours. We find that both approaches have their justification, but in neither of them would GMR (not to mention GBM) make any sense at all. The article is organized as follows: We briefly summarize the main points of irreversible investment theory in continuous time in the next section and present the results in the two classical cases (GBM and GMR). In Section 3 we present our solution for the case of CIR and undertake a comparative analysis with respect to the classical cases in Section 4. This also includes various numerical experiments and graphical outputs. Conclusions are summarized in Section 5.

We derive an explicit solution for the value function for the option of irreversible investment into a project whose value is modeled as a Cox–Ingersoll–Ross process. We compare our result with the classical ones obtained for the cases of geometric Brownian motion and geometric mean reversion. This includes a numerical analysis and graphical illustrations are given. We indicate various advantages of the Cox–Ingersoll–Ross process with regard to the geometric mean reversion process.