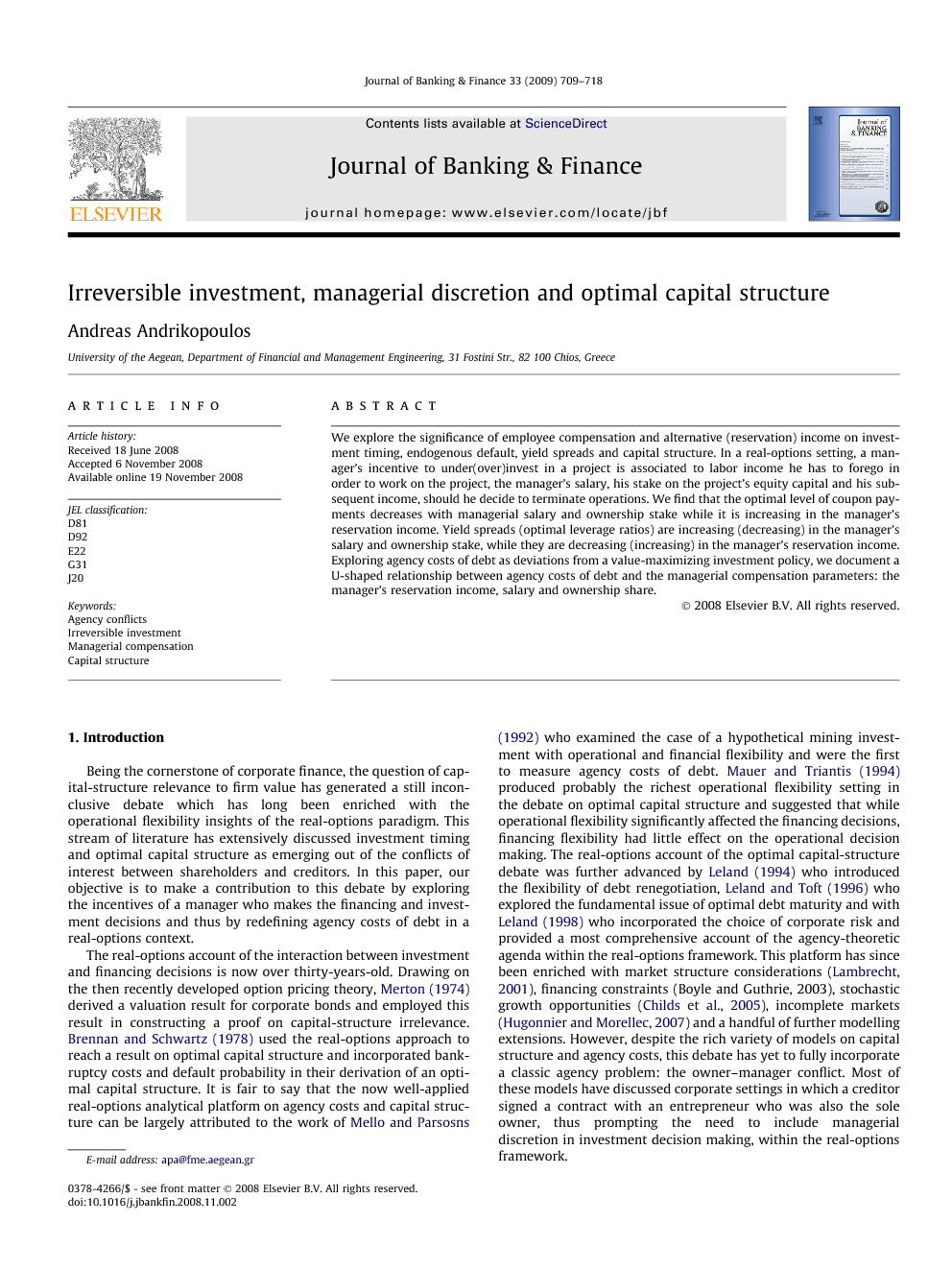 We explore the significance of employee compensation and alternative (reservation) income on investment timing, endogenous default, yield spreads and capital structure. In a real-options setting, a manager’s incentive to under(over)invest in a project is associated to labor income he has to forego in order to work on the project, the manager’s salary, his stake on the project’s equity capital and his subsequent income, should he decide to terminate operations. We find that the optimal level of coupon payments decreases with managerial salary and ownership stake while it is increasing in the manager’s reservation income. Yield spreads (optimal leverage ratios) are increasing (decreasing) in the manager’s salary and ownership stake, while they are decreasing (increasing) in the manager’s reservation income. Exploring agency costs of debt as deviations from a value-maximizing investment policy, we document a U-shaped relationship between agency costs of debt and the managerial compensation parameters: the manager’s reservation income, salary and ownership share.

Being the cornerstone of corporate finance, the question of capital-structure relevance to firm value has generated a still inconclusive debate which has long been enriched with the operational flexibility insights of the real-options paradigm. This stream of literature has extensively discussed investment timing and optimal capital structure as emerging out of the conflicts of interest between shareholders and creditors. In this paper, our objective is to make a contribution to this debate by exploring the incentives of a manager who makes the financing and investment decisions and thus by redefining agency costs of debt in a real-options context. The real-options account of the interaction between investment and financing decisions is now over thirty-years-old. Drawing on the then recently developed option pricing theory, Merton (1974) derived a valuation result for corporate bonds and employed this result in constructing a proof on capital-structure irrelevance. Brennan and Schwartz (1978) used the real-options approach to reach a result on optimal capital structure and incorporated bankruptcy costs and default probability in their derivation of an optimal capital structure. It is fair to say that the now well-applied real-options analytical platform on agency costs and capital structure can be largely attributed to the work of Mello and Parsosns (1992) who examined the case of a hypothetical mining investment with operational and financial flexibility and were the first to measure agency costs of debt. Mauer and Triantis (1994) produced probably the richest operational flexibility setting in the debate on optimal capital structure and suggested that while operational flexibility significantly affected the financing decisions, financing flexibility had little effect on the operational decision making. The real-options account of the optimal capital-structure debate was further advanced by Leland (1994) who introduced the flexibility of debt renegotiation, Leland and Toft (1996) who explored the fundamental issue of optimal debt maturity and with Leland (1998) who incorporated the choice of corporate risk and provided a most comprehensive account of the agency-theoretic agenda within the real-options framework. This platform has since been enriched with market structure considerations (Lambrecht, 2001), financing constraints (Boyle and Guthrie, 2003), stochastic growth opportunities (Childs et al., 2005), incomplete markets (Hugonnier and Morellec, 2007) and a handful of further modelling extensions. However, despite the rich variety of models on capital structure and agency costs, this debate has yet to fully incorporate a classic agency problem: the owner–manager conflict. Most of these models have discussed corporate settings in which a creditor signed a contract with an entrepreneur who was also the sole owner, thus prompting the need to include managerial discretion in investment decision making, within the real-options framework. Cadenillas et al. (2004) built on the option-like features of corporate securities and explored shareholder–manager conflicts as well as the effect of managerial compensation on capital structure. In this modelling framework, managers were only rewarded with stock and decided on corporate risk and the level of effort they were to exert, while the choice of leverage and of the level of managerial compensation was made by the shareholders. In a corporate setting where stock ownership is the only compensation of risk averse managers which face costly effort, the capital-structure choice would depend on the manager’s efficiency, momentum as well as company size. Grenadier and Wang (2005) revisited the question of investment timing for an option to invest, in the context of owner–manager contracts in an all-equity firm. In their agency-theoretic contribution to the problem of optimal investment timing, they explored the issue of asymmetric information and costly effort. Decomposing the option to invest into a manager’s option and an owner’s option, they found that both underinvestment and overinvestment can hold in equilibrium. Mauer and Sarkar (2005) examined the effect of the conflict between shareholders and creditors on capital structure and on investment timing. Based on the tax-deductibility of interest income, they found that the shareholders’ choice of investment and financing will generate deviations from value maximization and will create agency conflicts and costs. In their model, the shareholders’ incentive to overinvest imposes agency costs on yield spreads and the resulting cost of capital determines financing as well as investment decisions. Making a contribution to the ongoing debate on the interaction between investment timing and capital structure, this paper is motivated by empirical findings that the owner–creditor agency conflict alone cannot explain the observed variations in deviations from value-maximizing investment (Parrino and Weisbach, 1999) and that managerial compensation is significant in determining capital structure (e.g. Smith and Watts, 1992) as well as corporate value (e.g. Coles et al., 2001). We explore over-and-under investment with respect to the manager’s compensation and interactions with corporate investors, in the framework of a levered firm. Investment timing, real option value, optimal capital structure and agency costs of debt are estimated for various structures of manager’s compensation and reservation income. For the purposes of our analysis on investment timing, we employ the investment–financing setting of Mauer and Sarkar (2005), where corporate decision makers decide on investment timing and optimal capital structure, which is implemented at the moment when the project starts. Section 2 lays out our real-options framework, Section 3 analyzes some analytical and numerical results and Section 4 concludes the paper, indicating directions for future research.