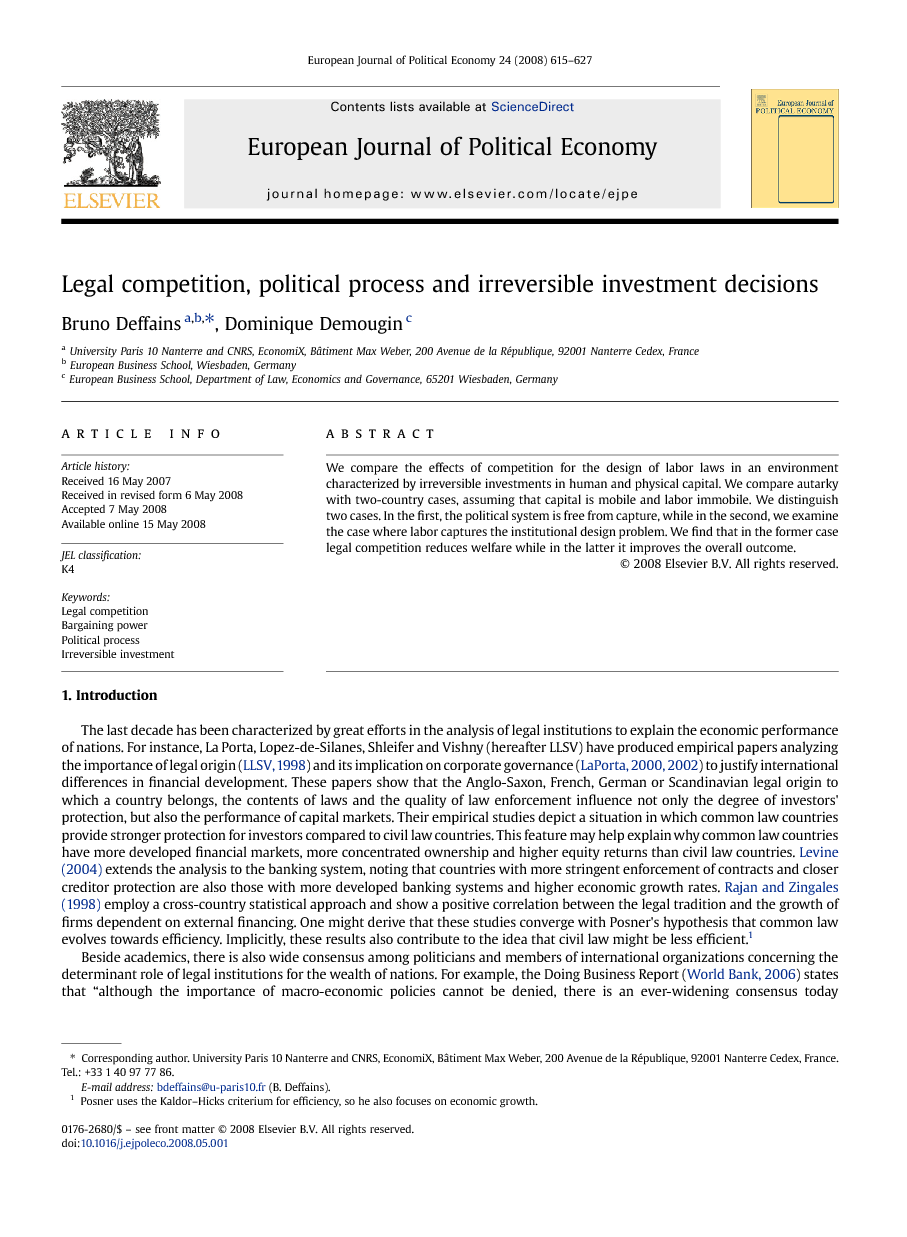 We compare the effects of competition for the design of labor laws in an environment characterized by irreversible investments in human and physical capital. We compare autarky with two-country cases, assuming that capital is mobile and labor immobile. We distinguish two cases. In the first, the political system is free from capture, while in the second, we examine the case where labor captures the institutional design problem. We find that in the former case legal competition reduces welfare while in the latter it improves the overall outcome.

This paper studies the effects of legal competition when the regulator may use institutional design for two different purposes: to reduce the inefficiencies of organizations and to attract some of the mobile factors. We show that the two objectives are not well-aligned. In particular, due to the prisoners' dilemma the countries cannot succeed in attracting the mobile factor. In this context, the nature of the political process is decisive. If the political process is efficient, legal competition undermines the institutional design. In contrast, with a capture by rent-seekers – specially by the immobile factor – we find that legal competition could improve economic efficiency. In our model, we assume incomplete contracts introducing two separate problems resulting from irreversibility of investments. The legal setup allocates bargaining power in order to balance the ensuing inefficiencies. Increasing the bargaining power of labor is useful because it guarantees that labor will have an incentive to invest in human capital. On the other hand, it reduces the firm's incentive to invest in physical capital. While analyzing these problems is appropriate, it is not the only way to create a link between economic efficiency and the legal and institutional design. For instance, one could analyze a situation as in Bental and Demougin (2006) substituting for the irreversibility of human capital investment a moral-hazard problem thereby affecting the trade-offs. More generally, any of the theories justifying the existence of firms based on market failures should also introduce a possibility of a legal and institutional design problem. We conjecture that all these design problems would lead to similar results. Thus, altogether, we concur with Sinn (2003) that legal competition is costly provided that the hand of the state is benevolent. At the other extreme, when the state is better described as a grabbing hand, legal competition may provide a powerful disciplining device, thereby forcing the underlying political decision mechanism to increase welfare. Whether the hand of the states is better described as benevolent or grabbing is an empirical issue, going beyond the scope of this paper. To conclude, we discuss possible extensions which go beyond the scope of the current exercise. For example, the paper uses a simple setup of two symmetric countries. Consequently, in autarchy, if the degree of capture is the same, both countries choose the same institutional setting. In reality, countries appear to have had rather different institutional structures before the advent of globalization. This could be justified by allowing different degrees of capture. An alternative could be to allow for different factor endowments. Such asymmetries may also provide interesting implications and empirical predictions as to which countries tend to adjust their institutional structures more strongly as we move from autarchy to an integrated situation. Moreover, it may help predict winners and losers of system competition. It may also be worth noting that there is a macroeconomic literature that addresses the change in labor's bargaining strength over time to explain the observed macro time series, see, among others, Blanchard (1997) and Caballero and Hammour (1998). It may be interesting to consider how the importance of international factors for the dynamic adjustment of institutional structures is evaluated in this literature.