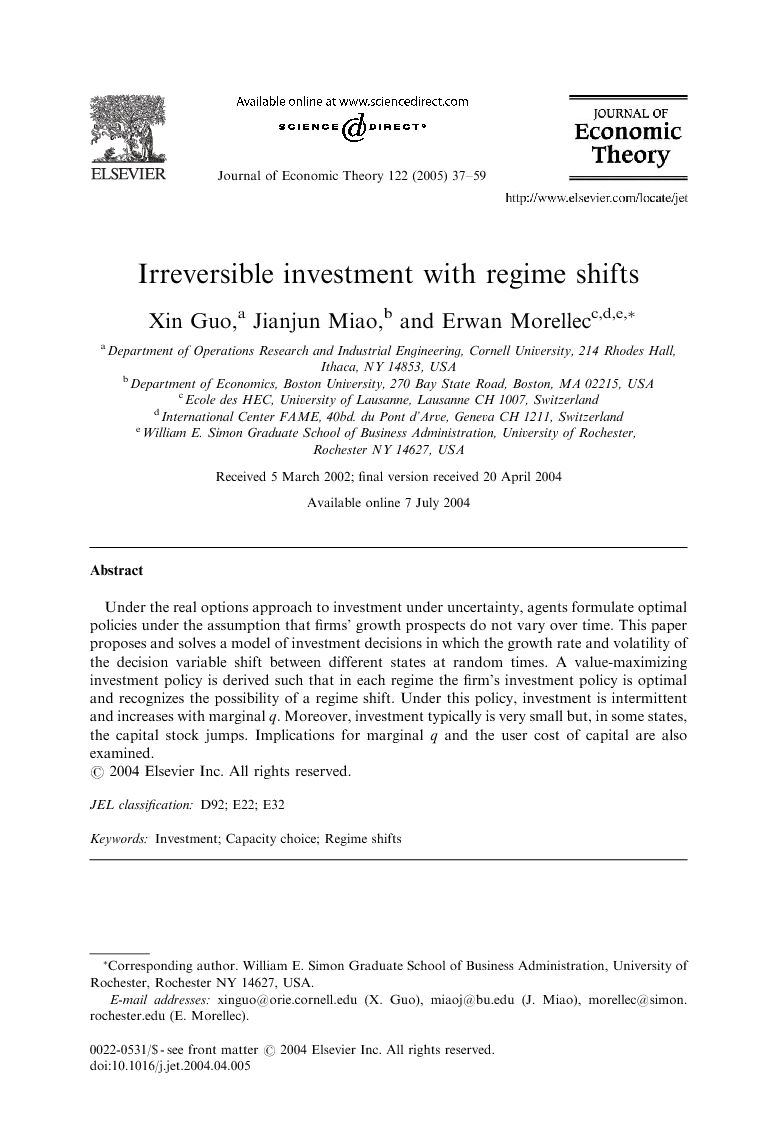 Under the real options approach to investment under uncertainty, agents formulate optimal policies under the assumption that firms’ growth prospects do not vary over time. This paper proposes and solves a model of investment decisions in which the growth rate and volatility of the decision variable shift between different states at random times. A value-maximizing investment policy is derived such that in each regime the firm's investment policy is optimal and recognizes the possibility of a regime shift. Under this policy, investment is intermittent and increases with marginal q. Moreover, investment typically is very small but, in some states, the capital stock jumps. Implications for marginal q and the user cost of capital are also examined.

This paper has analyzed investment decisions under uncertainty when the dynamics of the decision variable—growth rate and diffusion coefficient—shift between different states at random times. The main analytical result of the paper is that the value-maximizing investment policy is such that in each regime the firm’s investment policy is optimal, conditional on the optimal investment policy in the other regimes. This optimal investment policy is characterized by a different investment curve for each regime. Moreover, because of the possibility of a regime shift, the investment curve in each regime reflects the possibility for the firm to invest in the other regime. To determine the implications of the model for investment decisions and capital accumulation, we showed that the state space of the dynamic investment problem can be partitioned into various domains including an inaction region where no investment occurs. Outside of this region, the optimal rate of investment can be in one of two regimes: infinitesimal or lumpy. Investment is infinitesimal following an increase of the firm cash flows in a given regime. Investment is lumpy following a shift from the regime with the highest investment curve to the regime with the lowest one. That is, the model predicts that with irreversibility and regime shifts investment is intermittent and increases with marginal q: Moreover, the optimal rate of investment typically is very small but occasionally exhibits some spurts of capacity expansion. These predictions are generally consistent with the available empirical evidence on firms’ investment behavior (see [7] or [1]). The paper also provided an analysis of the determinants of marginal q and the user cost of capital in such an environment.