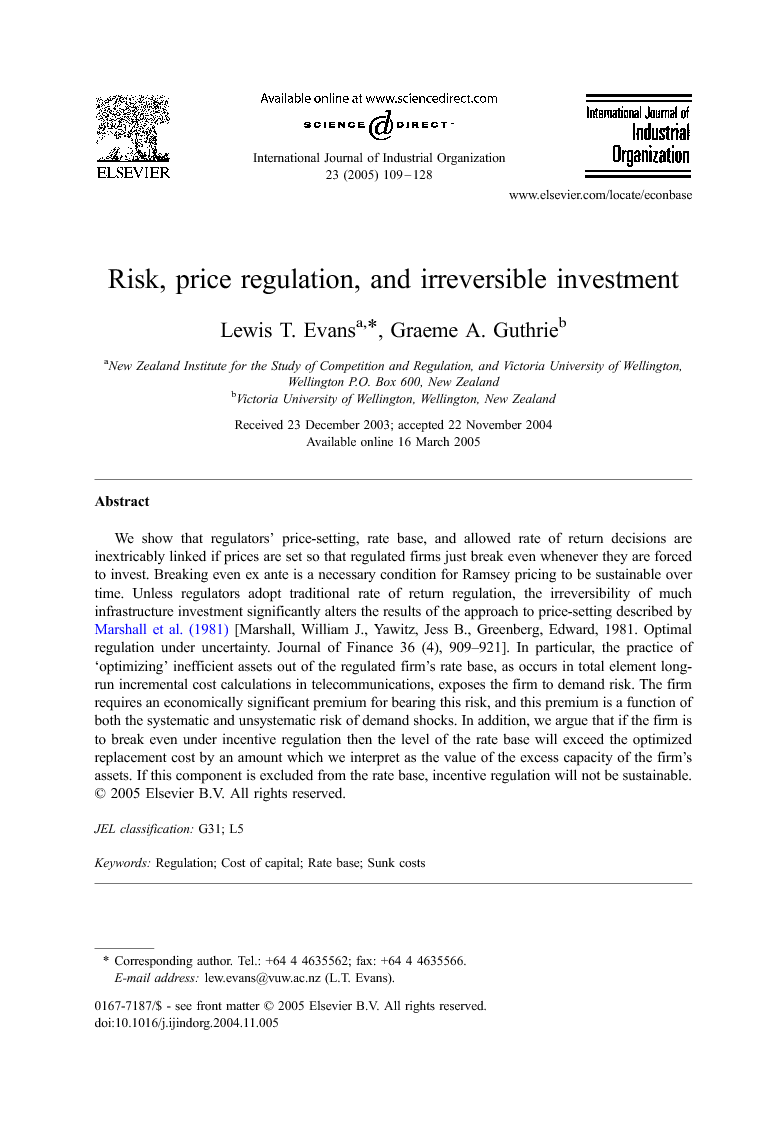 We show that regulators' price-setting, rate base, and allowed rate of return decisions are inextricably linked if prices are set so that regulated firms just break even whenever they are forced to invest. Breaking even ex ante is a necessary condition for Ramsey pricing to be sustainable over time. Unless regulators adopt traditional rate of return regulation, the irreversibility of much infrastructure investment significantly alters the results of the approach to price-setting described by Marshall et al. (1981) [Marshall, William J., Yawitz, Jess B., Greenberg, Edward, 1981. Optimal regulation under uncertainty. Journal of Finance 36 (4), 909–921]. In particular, the practice of ‘optimizing’ inefficient assets out of the regulated firm's rate base, as occurs in total element long-run incremental cost calculations in telecommunications, exposes the firm to demand risk. The firm requires an economically significant premium for bearing this risk, and this premium is a function of both the systematic and unsystematic risk of demand shocks. In addition, we argue that if the firm is to break even under incentive regulation then the level of the rate base will exceed the optimized replacement cost by an amount which we interpret as the value of the excess capacity of the firm's assets. If this component is excluded from the rate base, incentive regulation will not be sustainable.

We have identified various ways in which regulators can ensure that regulated firms just break even whenever they are forced to make irreversible investments in infrastructure. This condition, which extends Ramsey pricing to a dynamic setting, is necessary if provision of infrastructure is to be sustainable over time. The different approaches vary according to the rate base set by the regulator. One rate base, optimized deprival value (ODV), leads to allowed revenue which is forward-looking—that is, which does not depend on past investment decisions. In contrast, we show that if more traditional rate bases, such as historical cost and optimized replacement cost (ORC), are implemented in a way that treats sunk costs sustainably (that is, in such a way that the firm breaks even when it is forced to invest) then allowed revenue is backward-looking—that is, it depends on past demand (via its dependency on past investment decisions). Our work shows that if incentive regulation is to be sustainable over time then the rate base should be ODV, which exceeds ORC by an amount equal to the present value of expected cost savings resulting from the firm's ‘excess’ capacity. Further, if firms are to break even on new investments then the allowed rate of return should be sufficient to compensate for the extra risks implied by incentive regulation. Technology shocks are especially important since they can affect both capital prices and demand. For both ODV and ORC rate bases, the firm must be compensated for anticipated changes in technology through an allowance for expected economic depreciation; it must be compensated, ex ante, for unanticipated changes through the allowed rate of return. Systematic risk may be increased by the introduction of specific unsystematic risks because of the truncation resulting from irreversibility and the requirement to supply. Not using this rate base specification or allowing for these risks will incorrectly compensate the firm for its investment and thereby adversely affect investment and dynamic efficiency.24 There are two sets of measurement issues suggested by our analysis. The first is that it is not sufficient to draw comparator firms from the same industry where benchmark comparisons are made in the process of setting regulatory parameters—they must also be subject to the same regulatory environment. For example, European and US firms' rates of return under regulation, even if drawn from the same industry, will likely differ as a result of different regulatory regimes. The second measurement issue relates to assessing the profitability of regulated industries. Those industries that are subject to rate of return regulation can be expected to have lower ex ante and ex post rates of return than those subject to incentive regulation. Under incentive regulation, the risks of demand and capital price fluctuations are borne by the firm rather than consumers; the reverse is true for rate of return regulation. This difference between the regimes is exacerbated where regulation seeks to enhance competition and thereby introduces further risk to the incumbent's business. Although it is a policy issue for the firm and regulators, and a topic deserving further research, we have not investigated the decision to invest in advance of demand. Where there are economies to be achieved by investing in asset configurations for which capacity is not expected to be attained until some future date, such investment may be economically desirable. We conjecture that use of the ODV rate base would allow the firm to just break even if it could include in its ODV assets that are installed in anticipation of demand. These assets would be assigned a value equal to the potential cost savings that they implied, leaving the firm the cost saving as inducement for efficient investment prior to demand; assets for which there is no prospective use would have no future cost savings, and hence contribute nothing to ODV. The allowance of future cost savings associated with the calculated ODV is critical to specifying the rate base that allows the expected recovery of investment, and it has a significant speculative component that the regulator will generally want to assess. In this respect, and in the verification of ODV more generally, these sorts of incentive regimes may require detailed monitoring and regulator-decision-making that approach those of rate of return regulation.