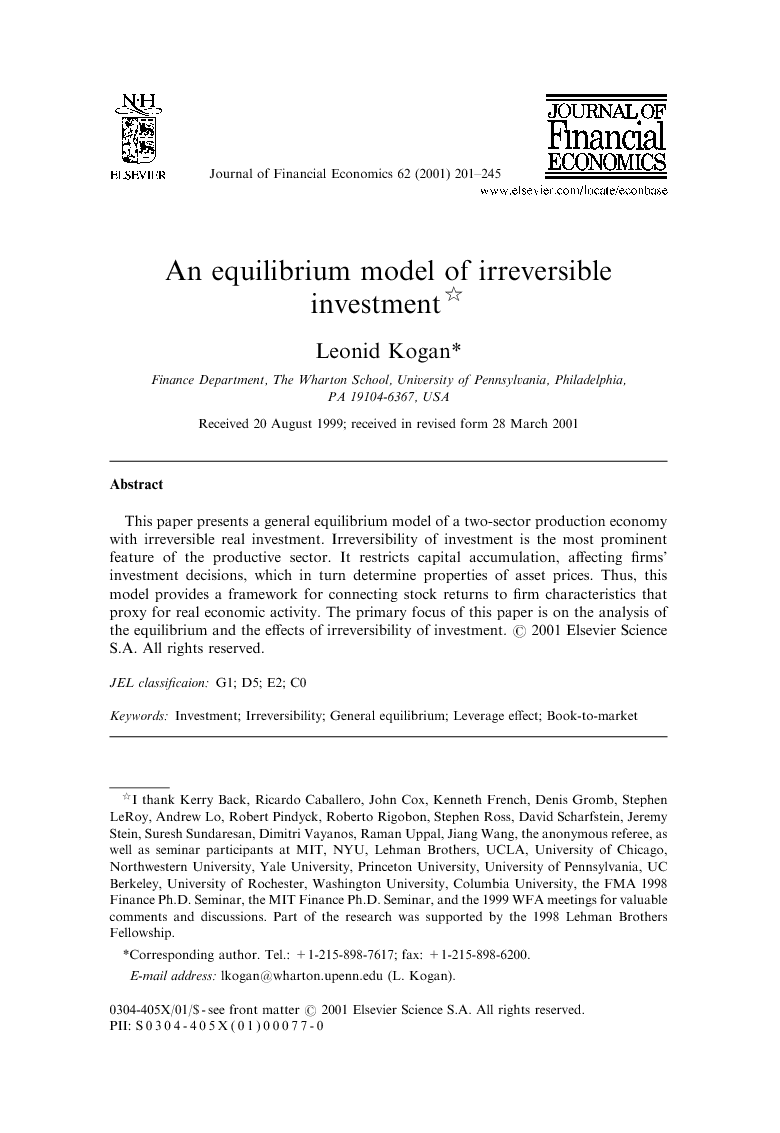 This paper presents a general equilibrium model of a two-sector production economy with irreversible real investment. Irreversibility of investment is the most prominent feature of the productive sector. It restricts capital accumulation, affecting firms’ investment decisions, which in turn determine properties of asset prices. Thus, this model provides a framework for connecting stock returns to firm characteristics that proxy for real economic activity. The primary focus of this paper is on the analysis of the equilibrium and the effects of irreversibility of investment.

Most asset pricing models focus on the demand side of the economy, making extremely simple assumptions about the supply side. For example, consider two of the most influential papers in this literature, Lucas (1978), and Cox et al. (1985). Lucas assumes that the supply of risky assets in the economy is completely exogenous. Thus, the elasticity of supply is equal to zero and demand shocks are absorbed entirely by changes in asset prices. On the other hand, Cox, Ingersoll, and Ross assume the opposite extreme. In their model the supply of basic risky assets is perfectly elastic. As a result, demand shocks have no effect on the prices of these assets. In both cases the elasticity of supply is fixed, either at infinity or at zero. The focus on the demand side of the economy proves to be fruitful by delivering tractable models. The obvious drawback is that such models do not lead to a realistic description of supply dynamics, limiting one's understanding of the interaction between real economic activity and prices of financial assets. To learn more about such interaction, the traditional paradigm must be augmented by incorporating economic activity of firms, such as their production and investment decisions. In this paper, I develop a two-sector continuous-time general-equilibrium model of a production economy with irreversible investment. Irreversibility of investment is the most prominent feature of the productive sector. It restricts the process of capital accumulation, affecting firms’ investment decisions, which in turn determine properties of asset prices. Thus, this model leads to a structural relation between stock returns and firm characteristics that proxy for real economic activity. The main objective of this paper is to introduce and analyze a tractable equilibrium model with irreversibility, with a focus on the investment behavior. I study the impact of irreversible investment on the behavior of stock returns in Kogan (2000). Extensive literature analyzes effects of irreversibility and adjustment costs on investment activity. Earlier contributions to this field investigate implications of capital immobility under certainty. Examples of this line of research include Arrow (1968), Johansen (1967), Dasgupta (1969), Ryder (1969), Bose (1970), Floyd and Hynes (1979), Smith and Starnes (1979), LeRoy (1983), and others. More recent literature has focused on the interaction between irreversibility and uncertainty. One avenue of the literature is concerned with optimal timing of irreversible investment projects, emphasizing the value of the option to delay investment that arises due to irreversibility.1 Another strand of the literature includes models of incremental capital accumulation by a single firm facing an uncertain economic environment. In particular, some researchers focus on a competitive firm, assuming exogenous stochastic processes of the output price and factor prices. These include Majd and Pindyck (1987), Pindyck (1988), Bertola and Caballero (1994), Caballero (1991), Leahy (1993), Abel and Eberly 1994 and Abel and Eberly 1997a and Abel et al. (1996). Yet others focus on a monopolist facing an exogenously given stochastic sequence of demand curves. Models of this type are developed by Pindyck (1988), Bertola (1989), He and Pindyck (1992), Abel and Eberly 1994, Abel and Eberly 1995, Abel and Eberly 1996 and Abel and Eberly 1997b, and Dixit and Pindyck (1994). In order to characterize the impact of uncertainty and irreversibility on the investment behavior of a competitive firm, it is important to recognize that the output price is determined endogenously in equilibrium, as highlighted by Pindyck (1993). This leads to the third branch of the literature, encompassing equilibrium models of a competitive industry. Examples of such models are Lucas and Prescott (1971), Dixit 1989b, Dixit 1991 and Dixit 1992, Caballero and Pindyck (1996), Leahy (1993), and Dixit and Pindyck (1994). Following Lucas and Prescott (1971), most researchers determine the equilibrium allocations by maximizing the total social surplus. My analysis of the equilibrium is also based on this idea. Sargent (1979) and Olson (1989) develop representative agent, one-sector general equilibrium growth models with irreversible investment. These models are designed to provide some insight into equilibrium dynamics of aggregate investment. However, as pointed out by Bertola and Caballero (1994), the empirical relevance of such models is questionable, since aggregate investment is not volatile enough to make aggregate irreversibility constraints binding. Instead, irreversibility is more likely important at the level of individual industries, which I capture using the two-sector structure of the economy. With a few exceptions, models of irreversible investment cannot be solved in closed form and require complex numerical computations. A few known examples of models with closed-form solutions include Pindyck (1988), Dixit 1989a and Dixit 1991, He and Pindyck (1992), Abel and Eberly 1994, Abel and Eberly 1995, Abel and Eberly 1996, Abel and Eberly 1997a and Abel and Eberly 1997b. In this paper, I use singular perturbation techniques to obtain accurate closed-form approximations to the exact solution of the model. The paper is organized as follows. Section 2 formulates and analyzes the general-equilibrium model of the economy with irreversible investment. In particular, I reduce the problem to a central planner's problem, which I then solve both using perturbation methods and numerically. Section 3 is the conclusion.

In this paper I have developed a general equilibrium model of a two-sector production economy with irreversible real investment. Irreversibility of investment is the most prominent feature of the productive sector. It restricts capital accumulation, affecting firms’ investment decisions, which in turn determine properties of asset prices. The primary focus of this paper is on the analysis of the equilibrium and the effects of irreversibility on investment. I use asymptotic methods to obtain accurate closed-form approximations to the equilibrium and perform comparative statics analysis of the optimal investment policy. Unlike in standard partial-equilibrium models of irreversible investment, the link between aggregate uncertainty and investment in general equilibrium is ambiguous and depends on households’ preferences.