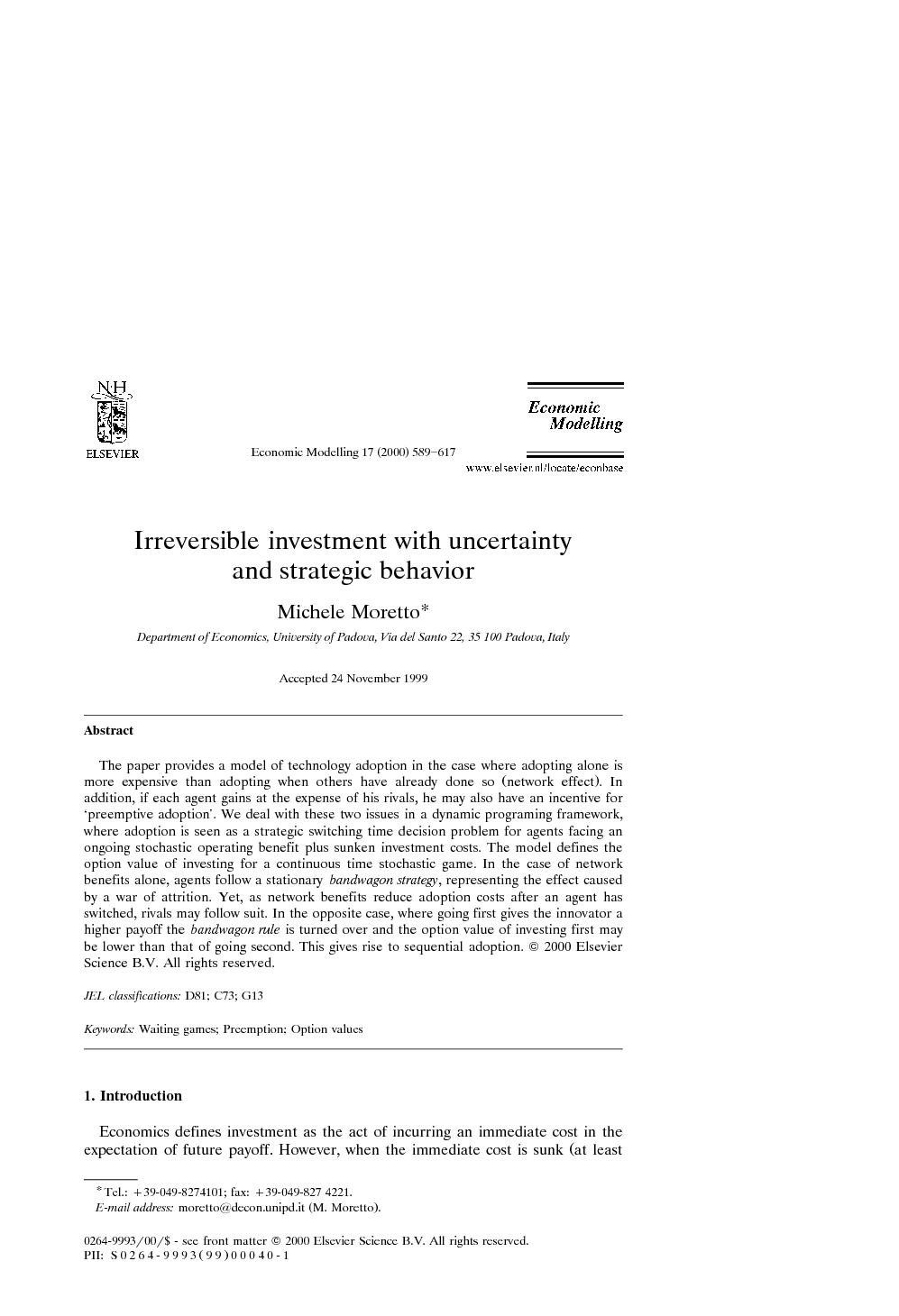 The paper provides a model of technology adoption in the case where adopting alone is more expensive than adopting when others have already done so (network effect). In addition, if each agent gains at the expense of his rivals, he may also have an incentive for ‘preemptive adoption’. We deal with these two issues in a dynamic programing framework, where adoption is seen as a strategic switching time decision problem for agents facing an ongoing stochastic operating benefit plus sunken investment costs. The model defines the option value of investing for a continuous time stochastic game. In the case of network benefits alone, agents follow a stationary bandwagon strategy, representing the effect caused by a war of attrition. Yet, as network benefits reduce adoption costs after an agent has switched, rivals may follow suit. In the opposite case, where going first gives the innovator a higher payoff the bandwagon rule is turned over and the option value of investing first may be lower than that of going second. This gives rise to sequential adoption.

Economics defines investment as the act of incurring an immediate cost in the expectation of future payoff. However, when the immediate cost is sunk (at least partially) and there is uncertainty over future rewards the timing of the investment decision becomes crucial. This paper describes the decision problem faced by agents who are already endowed with a technology and have to decide when to switch to a new one. While investing in the new technology increases the user's flow of benefits, it is more expensive to go first than to adopt the technology coordinately or later on when others have already done so. The gist of our argument is that there are ‘network benefits’, so the higher the number of users, the greater the advantage in terms of reduced investment costs.1 Although agents may wish to coordinate adoption, potentially conflicting preferences over appropriation of the positive ‘network benefits’ make them face a choice between individual adoption and agreement, that is between cooperative and non-cooperative adoption. The decision problem resembles one of ‘war of attrition’ where each agent waits for his rivals to concede. The first-mover disadvantage and the strategic nature of the timing decision leads to delayed adoption. However, if each individual agent gains at the expense of his rivals, agents may also have an incentive for ‘preemptive adoption’. That is, waiting might be sensible if agents fear that their opponents are likely to adopt. In this case, we would expect a non-cooperative equilibrium with early adoptions. We deal with these two issues in a unified continuous time framework, where adoption is seen as an irreversible switching-time decision problem for agents facing an ongoing stochastic operating benefit plus sunken adoption costs. We suppose that these costs are private information, so that neither agent knows who has the greatest cost advantage. Yet, since an agent's timing decision has implications for the other agents' decisions, the optimal switching rule must take account of strategic behavior. Regarding adoption costs, we distinguish between investment costs and set up costs. The advantage of technological change only partly depends on the reduction in the (more or less sunken) costs of the machinery which in turn may depend on the number of users. What is important are the costs associated with installation of the new technology, such as organization and training, as well as the benefits that may be forgone if better opportunities are discovered in the future. These items particularly influence users' current behavior, i.e. their choice of technology, and in turn affect the general level of diffusion of the new technology. Moreover, such costs are likely to consist of private information. The rest of the paper is organized as follows: Section 2 places the paper in the context of the literature on irreversible investment and market structure. In Section 3 we discuss, in a two-agents framework, the link between an agent's decision for adopting an irreversible technology and the benefits of going second after a network has been set up. In Section 4 we examine the features of the (symmetric) perfect Bayesian Nash equilibrium of the ‘war of attrition’ option game. In Section 5 we extend the war of attrition model by introducing a preemptive effect. Final remarks are in Section 6.

The paper has given a very simple theoretical analysis of the diffusion of a technology combining both the influence of first mover cost disadvantage and a demand preemptive effect. All of this in an investment decision framework with fixed costs and stochastic payoff which emphasizes the importance of the option value to delay investment. The model has endogenized the switching trigger values in continuous time stochastic games, where each player learns about his rivals' unknown trigger values observing that they have not yet acted. Using the distributional strategy approach proposed by Milgrom and Weber (1985), we show that in the case of network effect alone, or if this dominates the preemptive effect, agents will behave adopting a stationary bandwagon rule as a consequence of their difficulty of coordinating. However, as the network effect reduces (sunken) investment costs, we may get simultaneous non-coordinated adoption. In the opposite case, however, where going first gives the innovator a higher benefit in terms of payoff than he would gain by going second, the stationary bandwagon rule is overturned. The threshold level of adoption is lower than that obtained when going second. Thus, if one agent invests, his rival will never find it optimal to follow suit, but will have to wait for the payoff to rise further before it becomes worthwhile for him to switch too. A general conclusion that can be drawn is that the sunk cost nature of new investments and uncertainty about their future performance might well amplify the impact of strategic behavior, like in the cases considered in this paper: ‘war of attrition’ or ‘preemptive adoption’. In such situations the agent deciding whether or not to go for technological innovation must consider whether the best choice today will still be the best choice in the future and the strategic behavior that may give him the status of market leader (Dosi and Moretto, 1996 and Dosi and Moretto, 1997). Among the wide range of problems where the above results can be applied, it is worth mentioning the diffusion of prescription drugs in pharmaceutical markets and the recent development of goods incorporating ecological technologies. For the former, recent estimation of diffusion models which take account of some form of ‘network effects’ show that while a strong brand effect tends to create a first-mover advantage, which encourages investment (highly irreversible) to accelerate the development of a new drug, in the absence of such effect, it may be preferable to delay the investment and to be second in the market, if that can provide the possibility to develop a product embodying better quality attributes (Berndt et al., 1999). For the latter, improvement in environmental quality of goods might be seen by users as the principal positive externality generated by the creation of a network, with substantial reduction in adoption costs (Dosi and Moretto, 1998). To give an example, let us consider the transition from the internal combustion engine vehicle to the pure electric car. As both vehicles are designed around two different engines requiring incompatible fuels, the investment decision appears to be irreversible in that the user cannot disinvest if the dynamics of future private driving benefits are not those expected. By contrast, adoption by the inhabitants of metropolitan areas (or at least a majority of them) of an automobile using electric power instead of the more traditional polluting fuel may allow for a substantial reduction in carbon dioxide emissions which, as an indirect network effect, may provide (together with a direct effect on the investment cost) a substantial reduction in the adoption costs facilitating the switch. Thereby, apart from the fact that performances and costs of available electric cars still mean that they are scarcely attractive, the difficulties that potential users may encounter in coordinating their actions due, for instance, to different valuations of the environmental benefits, may give rise to a further delay of investment. On the other hand, if owners of electric vehicles are allowed to use them, for example, in some urban centres otherwise closed to traditional vehicles, this can be seen as an environmental tool that will promote their use. That is, such a sort of driving pass should induce a first-in advantage which may lead to preemptive adoption, although the benefit tends to be reduced over time with the increase in the number of electric cars within urban centres and consequent increase in traffic and congestion.