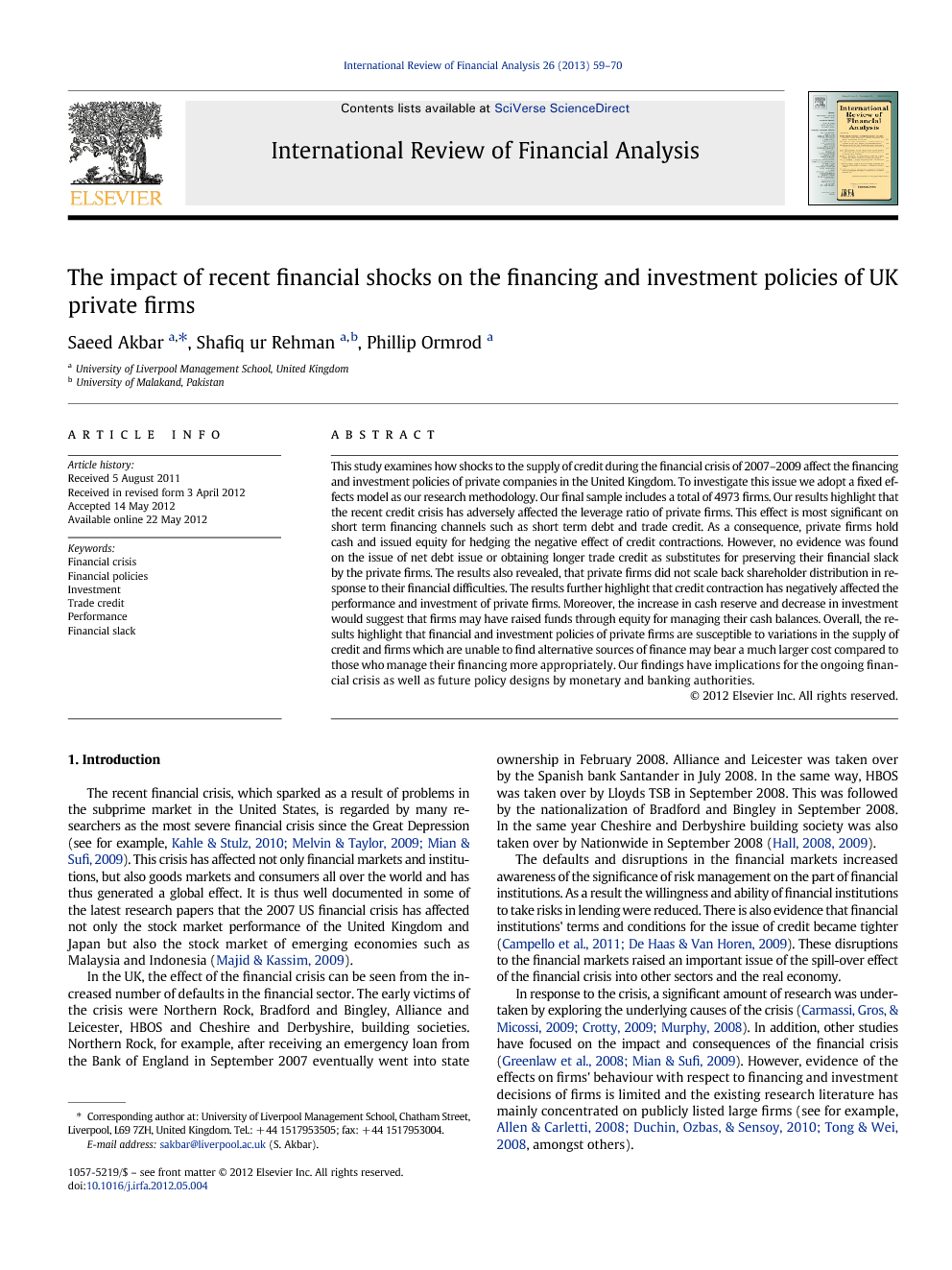 This study examines how shocks to the supply of credit during the financial crisis of 2007–2009 affect the financing and investment policies of private companies in the United Kingdom. To investigate this issue we adopt a fixed effects model as our research methodology. Our final sample includes a total of 4973 firms. Our results highlight that the recent credit crisis has adversely affected the leverage ratio of private firms. This effect is most significant on short term financing channels such as short term debt and trade credit. As a consequence, private firms hold cash and issued equity for hedging the negative effect of credit contractions. However, no evidence was found on the issue of net debt issue or obtaining longer trade credit as substitutes for preserving their financial slack by the private firms. The results also revealed, that private firms did not scale back shareholder distribution in response to their financial difficulties. The results further highlight that credit contraction has negatively affected the performance and investment of private firms. Moreover, the increase in cash reserve and decrease in investment would suggest that firms may have raised funds through equity for managing their cash balances. Overall, the results highlight that financial and investment policies of private firms are susceptible to variations in the supply of credit and firms which are unable to find alternative sources of finance may bear a much larger cost compared to those who manage their financing more appropriately. Our findings have implications for the ongoing financial crisis as well as future policy designs by monetary and banking authorities.

This paper examines the effects of credit contractions on the financing and investment policies of private firms in the UK. The results suggest that credit supply shocks have adversely affected the total debt ratio of private firms. The results further highlight that credit contractions have impaired short term financing channels (such as short term debt and trade credit) while the credit crisis has no significant effect on the long term financing channel. As a consequence, private firms hold cash and issue equity to hedge themselves from the negative effect of credit contractions. We, however, do not find any evidence that private firms substitute to net debt issue or net trade credit. Nor do we find that these firms scaled back shareholder distributions. Similarly, the results also reveal that the non-availability of credit and the relative lack of substitution had adversely affected both performance and investment of private firms. Moreover, increases in cash reserves and decreases in investment suggest that funds raised through equity finance may have been used to finance the cash reserve. A number of robustness tests were also carried out that further validated our results. Overall, our results suggest that financing and investment policies of private firms are vulnerable to variations in the supply of credit which may have long-term implications for the survival of these firms. Despite the contributions this study makes, it contains certain limitations. The first limitation is the use of annual data. Due to the non-availability of quarterly data from the available databases, this study only uses annual data in the analyses. The use of quarterly data would however add new insights into the research findings and contributions. This notion is supported by the findings of Duchin et al. (2010) and Chava and Purnanandam (2011). In particular quarterly data on financing mix, performance and investment of firms would add more value to the outcome of this research. The second limitation is the duration of the study. At the time of the data collection process, data were only available up to the year 2009. Although the study covered the pre-crisis and crisis periods, it would be it would have been better if we could have extended the study to include the post-crisis period as well. Despite these limitations this study makes some useful contributions to the limited literature in this area of research. This study would encourage further research in this area. In particular, investigating the financing and investment decisions of firms during the post crisis period and comparing it with the pre-crisis and crisis periods could be an interesting area for future research. Future research should also consider the role of relationship lending during the crisis period. In this regard, existing evidence suggests that establishing a relationship with lenders enhances the availability of financing during the crisis period (Petersen & Rajan, 1994). In addition, it is also been argued in the literature that a longer relationship with the lender helps firms pay lower interest rates and pledge little or no collateral for loans (Boot & Thakor, 1994). Therefore, investigating the role of relationship lending during the crisis period could be another area for future research. In addition, the use of qualitative methodology could also provide more valuable insights and a better understanding of financing and investment decisions of firms from the perspective of managers and investors. However, these issues are left to future research.