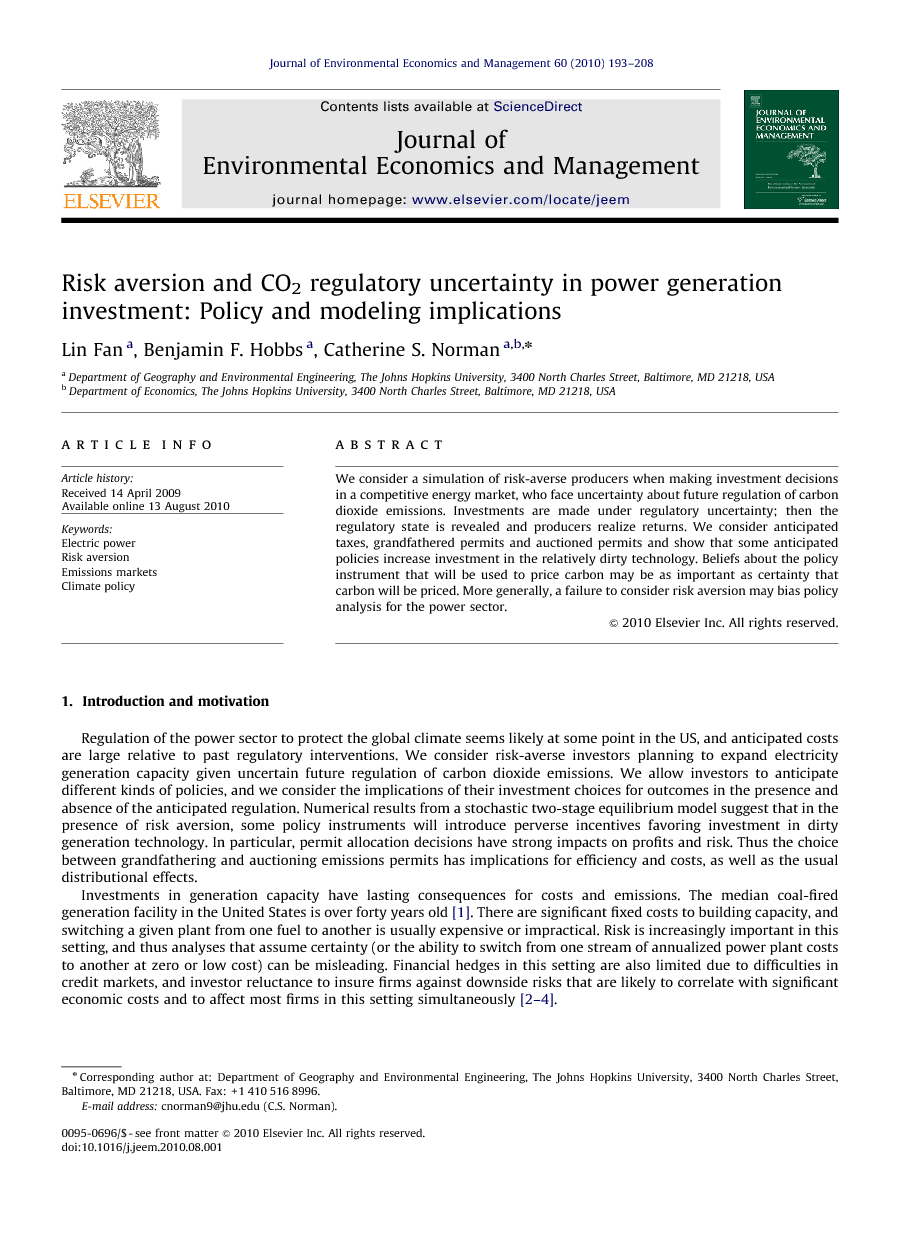 We consider a simulation of risk-averse producers when making investment decisions in a competitive energy market, who face uncertainty about future regulation of carbon dioxide emissions. Investments are made under regulatory uncertainty; then the regulatory state is revealed and producers realize returns. We consider anticipated taxes, grandfathered permits and auctioned permits and show that some anticipated policies increase investment in the relatively dirty technology. Beliefs about the policy instrument that will be used to price carbon may be as important as certainty that carbon will be priced. More generally, a failure to consider risk aversion may bias policy analysis for the power sector.

Regulation of the power sector to protect the global climate seems likely at some point in the US, and anticipated costs are large relative to past regulatory interventions. We consider risk-averse investors planning to expand electricity generation capacity given uncertain future regulation of carbon dioxide emissions. We allow investors to anticipate different kinds of policies, and we consider the implications of their investment choices for outcomes in the presence and absence of the anticipated regulation. Numerical results from a stochastic two-stage equilibrium model suggest that in the presence of risk aversion, some policy instruments will introduce perverse incentives favoring investment in dirty generation technology. In particular, permit allocation decisions have strong impacts on profits and risk. Thus the choice between grandfathering and auctioning emissions permits has implications for efficiency and costs, as well as the usual distributional effects. Investments in generation capacity have lasting consequences for costs and emissions. The median coal-fired generation facility in the United States is over forty years old [1]. There are significant fixed costs to building capacity, and switching a given plant from one fuel to another is usually expensive or impractical. Risk is increasingly important in this setting, and thus analyses that assume certainty (or the ability to switch from one stream of annualized power plant costs to another at zero or low cost) can be misleading. Financial hedges in this setting are also limited due to difficulties in credit markets, and investor reluctance to insure firms against downside risks that are likely to correlate with significant economic costs and to affect most firms in this setting simultaneously [2], [3] and [4]. In particular, risk-averse decision makers facing uncertain regulation may make investment choices that lead to a persistently inefficient generation mix for the decades ahead. Reinelt and Keith [5] find that the “interaction of regulatory uncertainty with irreversible investment raises the social cost of carbon abatement by as much as 50%” with risk-neutral investors1. Uncertainty can lead to investment in dirty technology in hopes that future policies will favor owners of existing coal plants, or to support lobbying efforts designed to minimize regulation. This overinvestment is socially suboptimal; it may also be suboptimal for business interests relative to a setting in which it is known with certainty whether or not there will be regulation. We examine the effects of incorporating risk aversion in profits as well as uncertainty regarding regulation, and consider some implications for the broader policy debate and associated modeling efforts. The two-stage model considers investments by two types of firms, one building highly polluting but low variable cost capacity (coal-fired plants), and the other building low polluting but high variable cost capacity (natural gas plants). Our efforts focus on the changing incentives for each kind of investment and are not an effort to realistically depict a single firm’s investment portfolio; given homogenous technology, allowing multiple firms to invest in both technologies will yield identical choices across firms, which complicates exposition without adding new insights. Firms with the capacity to hedge two technologies against each other will have different responses to regulatory uncertainty than those that cannot, but the change in price and cost ratios will work in the same direction for each type of investment. The first-stage investment decision is made in the face of regulatory uncertainty as to whether or not a given carbon policy will be imposed. In the second stage, the regulation is either imposed or not, and a short-run market equilibrium among the firms results. Price-taking behavior is assumed throughout. We consider a carbon tax, a cap-and-trade system with initial allowances auctioned, and a cap-and-trade system where permits are grandfathered to generators. As expected, regardless of how the allowances are allocated in a cap-and-trade system, risk-neutral firms make the same decisions in terms of capacity and output, even though different allowance allocation and distribution schemes yield varying profits. Risk-neutral firms choose an investment mix that is optimal for neither policy, maximizing the expected payoff of investment strategies based on their beliefs about the likelihood of the regulatory regime. Risk-averse investors hedge their bets to reduce their losses in the ‘bad’, low profit outcome even more than expected profit maximizers. In the case of a tax or an auctioned permit scheme, the bad outcome is regulation, and when permits are grandfathered it is no regulation. As intuition suggests, risk-neutral suppliers facing possible regulation build more gas and less coal-fired generation capacity than in a business-as-usual (BAU) no regulation scenario, regardless of what form the potential carbon regulation takes. Risk aversion complicates matters: if allowances are grandfathered, risk aversion increases investment in coal – which pays off in the bad, unregulated state – and decreases it in gas relative to the risk-neutral solution. If allowances are auctioned, the reverse is true. This result is driven by the gains from increased distribution of free permits to coal plants under grandfathering. Under our parameterizations, coal plant profits are higher under regulation, broadly consistent with observation of the European Union Emissions Trading System [6]. In contrast, an auction or carbon tax provides a more direct signal to reduce emissions: firms see the rise in the expected relative price of coal-fired generation under regulatory uncertainty and the more risk averse they are, the more they invest in less carbon-intensive generation that will pay off in the regulated state. This analysis focuses on firms that are uncertain about the passage of a specific regulation. It seems natural as well to consider the uncertainty about the form of eventual regulation, including uncertainty regarding the details of permit allocation and distribution schemes. We have formulated and solved models representing the situation in which firms are uncertain about the form of regulation. This limits the ability of firms to hedge regulatory risks by adjusting investment strategies, and thus the effects of risk aversion are mixed and small relative to the results presented here.

For risk-averse generators, capacity and cost outcomes are sensitive to the distribution and allocation scheme for allowances, since this determines whether the ‘regulation’ or ‘no regulation’ scenario is more profitable. Risk-neutral firms will make the same investment decision in terms of decision variables (capacities, supplies, prices, and demands), regardless of how the emission allowances are treated (grandfathered or auctioned) and which rule is applied in the grandfathering case. In contrast, risk-averse firms will not: if carbon is taxed or allowances are auctioned, investment in clean generation increases with the degree of risk aversion as firms self-insure against the possibility of costly regulation. On the other hand, if allowances are allocated to producers for free, investment in dirty generation rises relative to the risk-neutral case and, under our parameterizations, approaches the level expected under the guaranteed ‘no regulation’ scenario. Risk-averse generators position themselves to hedge against the possibility that lucrative regulation will not be implemented in the next period. With risk aversion, emissions in the ‘no regulation’ scenario are lower for auctioned permits and higher with grandfathering. Consumer prices are not very sensitive to how permits are distributed in the regulated scenario; however, if the proposed regulation is not implemented, consumer prices rise with risk aversion if an auction is anticipated and fall if grandfathering is anticipated. Complete social welfare calculations are not possible without valuing avoided climate damages (and damages associated with other pollutants for each technology), but these results imply losses of productive and allocative efficiency in power markets. The magnitude of the effect of risk aversion on the equilibrium generation mix will, of course, depend on assumptions concerning the available types of generation and their characteristics. We have considered the two most popular types of generation capacity installed in the last twenty years in the US. In other simulations, not shown here, we have also included renewable generation. The same trend occurs: risk aversion pushes investment in the direction of the scenario that is least profitable. Other assumptions might result in larger or smaller effects, but we anticipate the same qualitative results. Our finding has clear policy implications: distribution schemes do not just determine who gets rents from creating emissions rights. The kind of regulatory framework that industry anticipates will affect their choices in potentially perverse ways. Additionally, if political considerations make regulators unable or unwilling to impose carbon restrictions without including provisions to aid key polluting sectors like power generation, it might be preferable to find ways to rebate the funds raised from an auction in ways that do not encourage carbon-intensive generation investment. Generating firms are currently pushing for significant grandfathering under any proposed cap-and-trade scheme to reduce their losses from the implementation of GHG regulations. As a result, incentives to hedge physical capital investments in inefficient ways—by investing in relatively dirty capacity—may well be locked in. This suggests a useful role for regulators and policy designers focusing on the permitting process for new plants and retrofits of old plants. If policy makers can indicate a clear and long term carbon policy goal, generating firms will be able to observe a more direct signal to follow and thus potentially avoid inefficiency in physical capital investments. When policy makers fail to do so, tightening new source standards and restricting new investment in relatively dirty technologies might at least partially mitigate the inefficiencies associated with risk-averse generators facing expansion decisions. More generally, we find that a failure to consider risk and risk aversion may bias analyses of this sector and others, especially where durable capital investments limit adjustment options. Further work is needed to determine how risk aversion might be incorporated in large-scale policy models. One extension would be to consider multiple decision stages for investments, which would allow for both the option of delaying investment until regulatory uncertainties are at least partially resolved, and for later adjustments in capacity. Although computational challenges make this work beyond the scope of the current paper, we hypothesize that the irreversibility of capacity investment would still imply that increased risk aversion would bias firms towards investments that are optimal under the least profitable scenarios, retaining the perverse incentives outlined here. Defensible heuristics or efforts to estimate the degree of risk aversion empirically might strengthen future modeling efforts. Further, this work abstracts from known important features of the policy setting, including market power, renewable portfolio standards, and engineering risks related to grid reliability. A more detailed specification of the plant itself could enable consideration of plant lifecycles and scale effects in technology. This would ideally include the dynamics of investment choices when the investor already owns heterogenous capital stock for electricity generation; the choice of when to retire old capital so as to delay decision making under uncertainty is likely to be important in this setting.