عنوان انگلیسی
Foreign investment impact and incentive: a strategic approach to the relationship between the objectives of foreign investment policy and their promotion
دانلود فوری مقاله + سفارش ترجمه 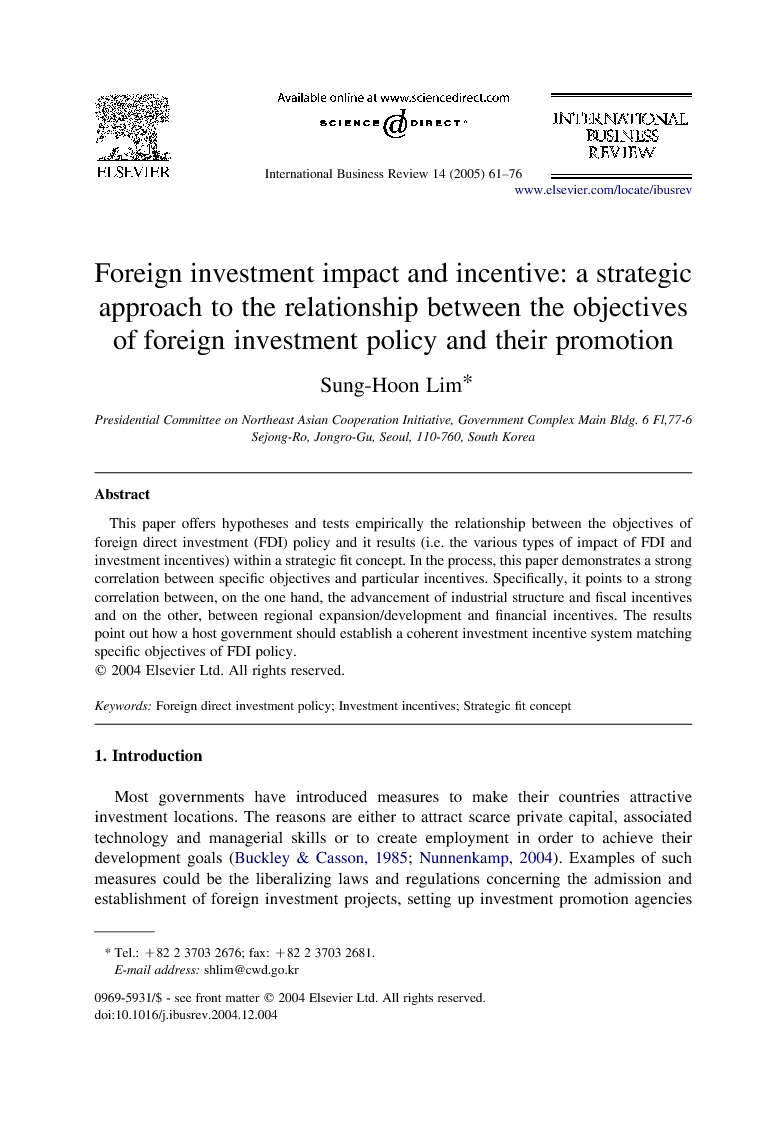 This paper offers hypotheses and tests empirically the relationship between the objectives of foreign direct investment (FDI) policy and it results (i.e. the various types of impact of FDI and investment incentives) within a strategic fit concept. In the process, this paper demonstrates a strong correlation between specific objectives and particular incentives. Specifically, it points to a strong correlation between, on the one hand, the advancement of industrial structure and fiscal incentives and on the other, between regional expansion/development and financial incentives. The results point out how a host government should establish a coherent investment incentive system matching specific objectives of FDI policy.

Most governments have introduced measures to make their countries attractive investment locations. The reasons are either to attract scarce private capital, associated technology and managerial skills or to create employment in order to achieve their development goals (Buckley & Casson, 1985; Nunnenkamp, 2004). Examples of such measures could be the liberalizing laws and regulations concerning the admission and establishment of foreign investment projects, setting up investment promotion agencies and organizing investment dispute mechanisms. Investment incentives are but one part of these promotional measures (Walker, 1965, Aharoni, 1966, Dunning, 1981, Dunning, 1988, United Nations Conference on Trade and Development (UNCTAD), 2000 and Loewendahl, 2001; Wint & Wells, 1990). The role of incentives in promoting FDI has been the main topic of a number of studies (Walker, 1965, Root and Ahmed, 1979, Lim, 1983, Rolfe et al., 1993, Loree and Guisinger, 1995, Cantwell and Mudambi, 2000 and Zhang, 2001). However, the advantages and disadvantages of investment incentives have never been clearly defined. A host government is obliged to employ investment incentives that will be both effective and precise in accomplishing its economic objectives. If it does not, the harm done would not only be limited to the inefficiency of the implementation of FDI policy. It would also create distortions in the economic structure of the host country. Thus in order to maximize the impact of incentives, the host government should establish a coherent incentive system related to specific FDI objectives. There are several studies dealing with the topic of investment incentives. None, however, consider the relation between such incentives and the policy objectives of a host government. This paper, examines an ideal relationship between the objectives of FDI policy and investment incentives within a ‘strategic fit’ concept. In order to substantiate the hypotheses presented below, this paper will propose a framework of FDI policy objectives and incentives calculated to optimize the intended FDI effect. To examine the hypotheses based on collected data from 68 countries, an empirical test using multivariate correlation analysis and the optimal scaling method was conducted and the results presented.

This paper demonstrates that investment incentives might assist the achievement of some policy objectives, but they will not help to advance all such objectives. The paper proposes the ‘strategic fit’ approach should be the norm for host governments that seek specific economic effects through attracting FDI. It also extends the notion of ‘fit’ within two dimensions of policy objective (scope and timing of impact) and its means of achievement (flexibility and point of realization). Ultimately, this paper confirms that the different objectives and the means to their achievement should be optimally aligned differently along these two dimensions. To explore the model of ‘policy objective-means fit,’ samples were collected and empirical analyses were conducted. From the results, it has been proven that there is a strong correlation between particular objectives and particular incentives, i.e. advancing the industrial structure and fiscal incentives, regional expansion/development and financial incentives. The thrust of the argument of this paper is that if a country faces the challenge of balancing regional economic development due to the demands of local governments, a financial incentive system is recommended as the means of FDI inducement. The characteristics of financial incentives, for example, the amount of incentive benefit at the start-up stage and the degree of flexibility in their application make such incentives more advantageous to potential investors compared to fiscal incentives. In contrast, host governments that seek to enhance the advancement of their national industrial structures by attracting MNCs with cutting-edge technology and creating value-added capability, need to implement fiscal incentives in which the value of incentives offered is proportional to the MNCs' ex-post performance. This paper, asserts that each government should adjust its FDI attraction policy to a particular firm's strategic viewpoint and should also introduce the concept of strategic planning at the time investment policy is formulated. To maximize the economic effectiveness of foreign investments, it is essential to determine explicit investment objectives and to prepare an appropriate investment promotional program in the same manner that a multinational corporate establishes its strategy. If a host country government formulates and adapts its FDI policy without considering the relationship between its policy objectives and its means by which they might be realized, it will not only result in a drain on the treasuries of the country but also distort its industrial structure. The prime contention of this paper is that countries that customize their FDI incentives to the supporting the goals of the firms they are trying to attract will do far better than countries that do not. That is, host governments that intend to attain economic externalities from FDI will bolster their chances of success by devising and promoting incentives that will advance the strategic aims of potential investors. Host government FDI policy goals must be reflected in how foreign firms and industrial sectors are targeted, as well as in such activities of national investment promotion agencies (IPAs) as image building, investment origination/generation and investment support services (Wells & Wint, 1990). Therefore, further research should aim to construct paradigms that will enable policy makers to more accurately devise incentives that will both advance governmental policy objectives and corporate strategy, and at the same tine formulate IPA marketing activities accordingly.