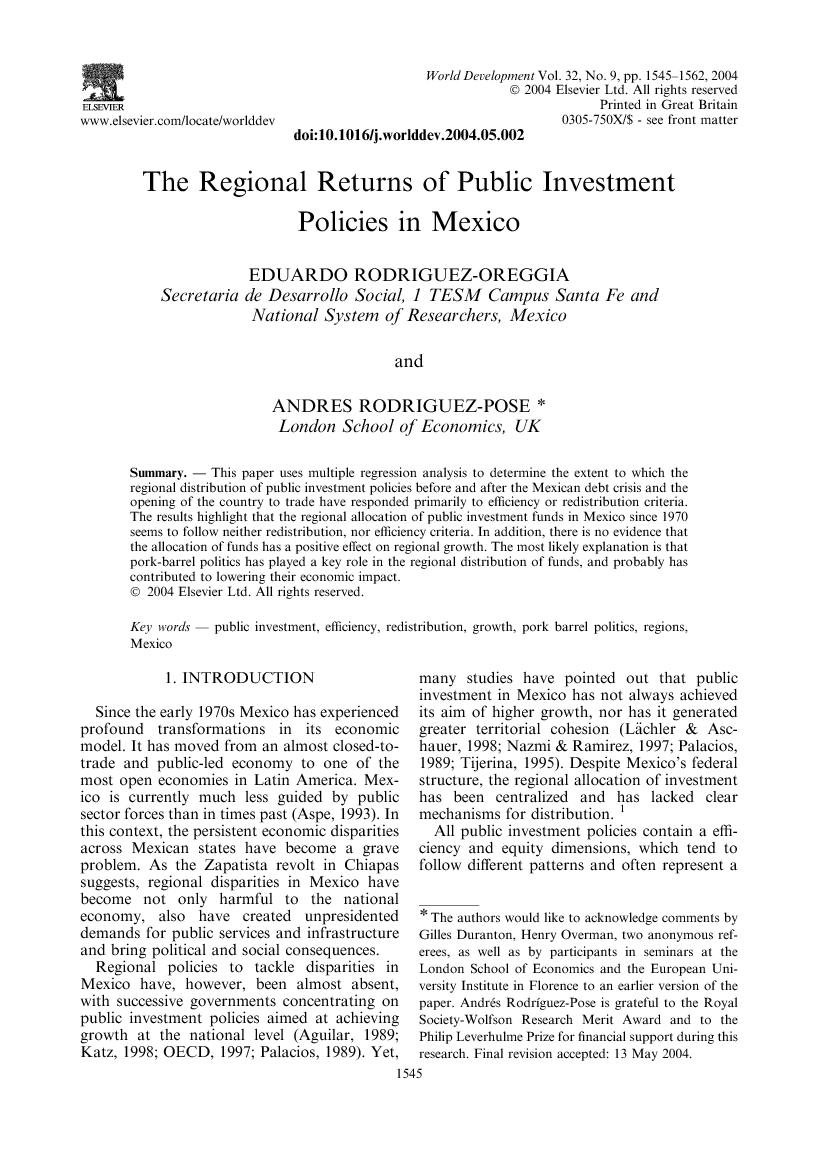 This paper uses multiple regression analysis to determine the extent to which the regional distribution of public investment policies before and after the Mexican debt crisis and the opening of the country to trade have responded primarily to efficiency or redistribution criteria. The results highlight that the regional allocation of public investment funds in Mexico since 1970 seems to follow neither redistribution, nor efficiency criteria. In addition, there is no evidence that the allocation of funds has a positive effect on regional growth. The most likely explanation is that pork-barrel politics has played a key role in the regional distribution of funds, and probably has contributed to lowering their economic impact.

Since the early 1970s Mexico has experienced profound transformations in its economic model. It has moved from an almost closed-to-trade and public-led economy to one of the most open economies in Latin America. Mexico is currently much less guided by public sector forces than in times past (Aspe, 1993). In this context, the persistent economic disparities across Mexican states have become a grave problem. As the Zapatista revolt in Chiapas suggests, regional disparities in Mexico have become not only harmful to the national economy, also have created unpresidented demands for public services and infrastructure and bring political and social consequences. Regional policies to tackle disparities in Mexico have, however, been almost absent, with successive governments concentrating on public investment policies aimed at achieving growth at the national level (Aguilar, 1989; Katz, 1998; OECD, 1997; Palacios, 1989). Yet, many studies have pointed out that public investment in Mexico has not always achieved its aim of higher growth, nor has it generated greater territorial cohesion (Lächler & Aschauer, 1998; Nazmi & Ramirez, 1997; Palacios, 1989; Tijerina, 1995). Despite Mexico's federal structure, the regional allocation of investment has been centralized and has lacked clear mechanisms for distribution.1All public investment policies contain a efficiency and equity dimensions, which tend to follow different patterns and often represent a tradeoff (Molle, 1980; Richardson, 1978). The fundamental ethos on the efficiency side is that governments should pay more attention to those areas where the allocation of resources allows for higher returns (De la Fuente & Vives, 1995). The justification for an equity program is that it is socially, morally and politically unacceptable for different parts of the country––or, for that matter, for groups of individuals within the country––to experience great differences in standards of living. Inequality has also been proven to have some harmful effects on growth (Barro, 2000; Persson & Tabellini, 1994). Public investment policies, then, may not be considered only as a way to equalize conditions among areas in order to avoid the aforementioned problems, but also as a means to raise the overall level of development by creating conditions for higher productivity throughout Mexico.2 The role of governments, in general, and of central government, in particular, is thus key in determining the evolution of territorial disparities. Whether the main objective is to enhance the accumulation of productive factors and maximize national growth potential or to distribute economic activity more evenly across the country (and perhaps in this way also maximize growth potential), central government public policy decisions have important territorial implications. There is, however, little theoretical consensus about the territorial impact of public policy intervention. From an endogenous growth or a new economic geography perspective, national public policies aimed at enhancing overall growth may lead, as a consequence of their impact on the distribution of human capital (Lucas, 1988 and Lucas, 1993), innovation (Grossman & Helpman, 1991; Romer, 1990) and infrastructure (Faini, 1984; Martin, 1999; Martin & Rogers, 1995), to increasing returns to scale, resulting in greater divergence across regions and favoring a center-periphery pattern (Krugman, 1991; Martin, 1998; Romer, 1990). Neoclassical and other scholarly strands suggest, in contrast, that public investment may have an equalizing role, as it generates goods or activities which increase private productivity, especially in those areas with a lower initial stock of capital, resulting thus in constant or decreasing returns to scale. The empirical works of Aschauer (1989), and Munnell, 1990a and Munnell, 1990b, focusing on infrastructure public investment, or those of Barro (1990) have highlighted the positive returns of public investment as a whole and their positive impact in backward areas. The role of central governments is, from this perspective, determinant in enhancing the accumulation of productive factors and growth potential in backward regions through public investment policies. If there are factors that have a positive effect on regional growth, there is scope for the implementation of supply-side policies (Martin, 1998). Public investment in Mexico has been an important tool not only for providing infrastructure, but also for enhancing local capacities in general, and its use may help to explain the improvement in social indexes across the country (Lustig, 1998). Nevertheless, public investment has also been frequently used in a discretionary form, for example, to increase the government's presence in the economy through the acquisition of many enterprises, as was the case during the 1970s (Aspe & Beristain, 1984), leading to a skewed allocation of public funds in favor of the most developed states (Katz, 1998; Palacios, 1989; Rodrı́guez, 1997). The question that we address in this paper is thus, to what extent have national investment policies, the main focus of which has been to generate greater economic activity, actually exacerbated (or, by contrast, prevented a further growth of) regional disparities in Mexico. More specifically, we intend to determine the extent to which such investment has been: allocated according to redistribution criteria; allocated according to efficiency criteria; and an important factor of regional growth. The paper is organized as follows. Section 2 introduces a brief review of the topic. Section 3 describes the structure and evolution of public investment in Mexico. Section 4 analyzes the redistributive factor and Section 5 focuses on the efficiency criteria. Section 6 discusses the impact of public investment on growth. The conclusions are presented in Section 7.