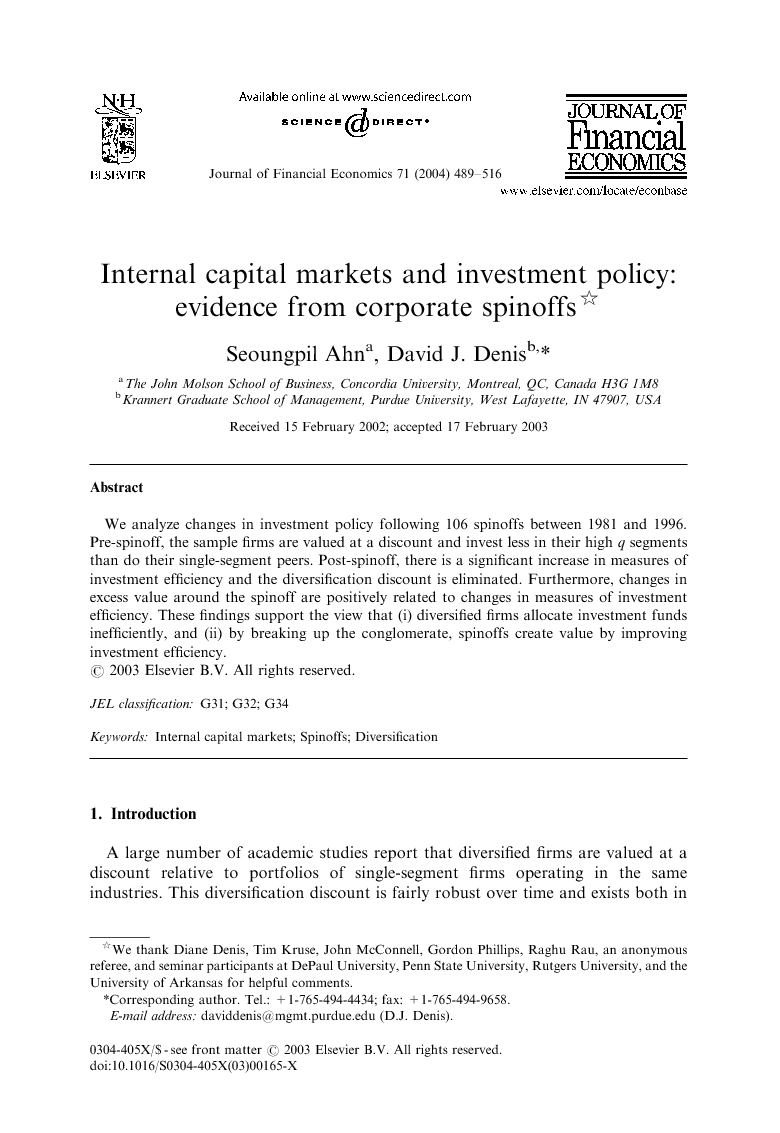 A large number of academic studies report that diversified firms are valued at a discount relative to portfolios of single-segment firms operating in the same industries. This diversification discount is fairly robust over time and exists both in the U.S. and in other developed economies.1 Further, Comment and Jarrell (1995) show a systematic pattern of refocusing among U.S. firms since the mid-1980s. On average, this refocusing is associated with significant increases in shareholder wealth. Announcements of focus-increasing transactions such as asset sales, equity carve-outs, and corporate spinoffs are all met with positive stock price reactions.2 Although the existence of the diversification discount is not questioned, its interpretation remains controversial. Some argue that the evidence supports the view that diversified organizations destroy value. A particular version of this hypothesis is that diversified firms invest inefficiently, investing too much in some business units and/or too little in others. This hypothesis draws theoretical support from the models of Rajan et al. (2000) and Scharfstein and Stein (2000) and is consistent with the evidence in Scharfstein (1998) and Rajan et al. (2000). However, both Chevalier (2000) and Whited (2001) argue that the empirical results supporting the inefficient investment hypothesis can be explained by measurement error. In addition, studies by Campa and Kedia (1999), Graham et al. (2002), and Maksimovic and Phillips (2002) argue that the link between diversification and value is not causal, but rather is the result of endogenous firm choices. We provide evidence on the inefficient investment hypothesis by analyzing changes in investment policy following corporate spinoffs. If the diversification discount is caused in part by inefficient investment policies in diversified firms, we expect that (i) the breakup of the diversified firm will significantly reduce the discount, (ii) diversified firms will invest inefficiently prior to a breakup but increase investment efficiency following the breakup, and (iii) the increase in value following the breakup will be positively related to changes in measures of investment efficiency. Using a sample of 106 spinoffs completed by multisegment firms between 1981 and 1996, we report results that are broadly consistent with the inefficient investment hypothesis. Like previous studies of diversified firms, we find that prior to the spinoff, the sample firms trade at a significant discount to stand-alone firms. Following the spinoff, however, the diversification discount is eliminated. We conduct several tests to determine whether a change in investment efficiency contributes to the change in value following the spinoff. First, we examine industry-adjusted levels of investment in individual segments. We find that prior to the spinoff, industry-adjusted investment is negative in the firm's high-q segments and statistically insignificant in the firm's low-q segments. Industry-adjusted investment is significantly higher in the firm's low-q segments than in its high-q segments. Following the spinoff, investment in high-q segments is significantly increased. Second, we compute two measures of firm-level investment efficiency, the relative investment ratio (RINV) and Rajan et al.'s (2000) relative value-added (RVA) measure. Positive values for each measure indicate that the firm invests relatively more in its high-q segments than in its low-q segments. We find that the sample firms exhibit significantly negative values of RINV and RVA prior to the spinoff, and a substantial deterioration in both RINV and RVA in the three years prior to the spinoff. Following the spinoff, both RINV and RVA are significantly increased and are insignificantly different from zero. These changes in RVA and RINV are largest for those firms that have the greatest dispersion in segment q values in the year prior to the spinoff. Further tests indicate that the changes in investment allocations are not due to an unexpected improvement in the growth opportunities of high-q segments that is not captured by the q of single-segment industry peers. Finally, we examine the link between changes in value and changes in investment efficiency. Controlling for changes in cash flows and changes in investment levels, we find that the change in excess value from the year prior to the spinoff to the year following the spinoff is positively related to the change in either RINV or RVA over the same period. Taken together, these findings imply that the sample firms invest inefficiently prior to the spinoff and significantly improve investment efficiency following the spinoff. This increase in investment efficiency leads to a corresponding increase in firm value. Nevertheless, our point estimates suggest that it is unlikely that changes in investment policy can account for the entire increase in firm value surrounding spinoffs. Other potential explanations include wealth transfers from bondholders (Hite and Owers, 1983; Parrino, 1997), tax and regulatory benefits (Schipper and Smith, 1983), the facilitation of corporate control transactions (Cusatis et al., 1993), the reversal of prior takeover losses (Allen et al., 1995), improved contracting efficiency (Hite and Owers, 1983; Schipper and Smith, 1983; Aron, 1991), enhanced corporate focus (Daley et al., 1997), and reduced information asymmetry (Gilson et al., 1997; Krishnaswami and Subramaniam, 1999). As we discuss later, these other explanations are not necessarily mutually exclusive with the inefficient investment hypothesis. The remainder of the paper is organized as follows. In Section 2, we describe our research design in more detail. In Section 3, we describe the sample selection procedure and provide descriptive statistics for the sample spinoffs. 4, 5 and 6 contain our main analysis of changes in excess value and changes investment policy. Section 7 provides a discussion of our results and offers possible explanations for the observed changes in investment policy. Section 8 concludes.