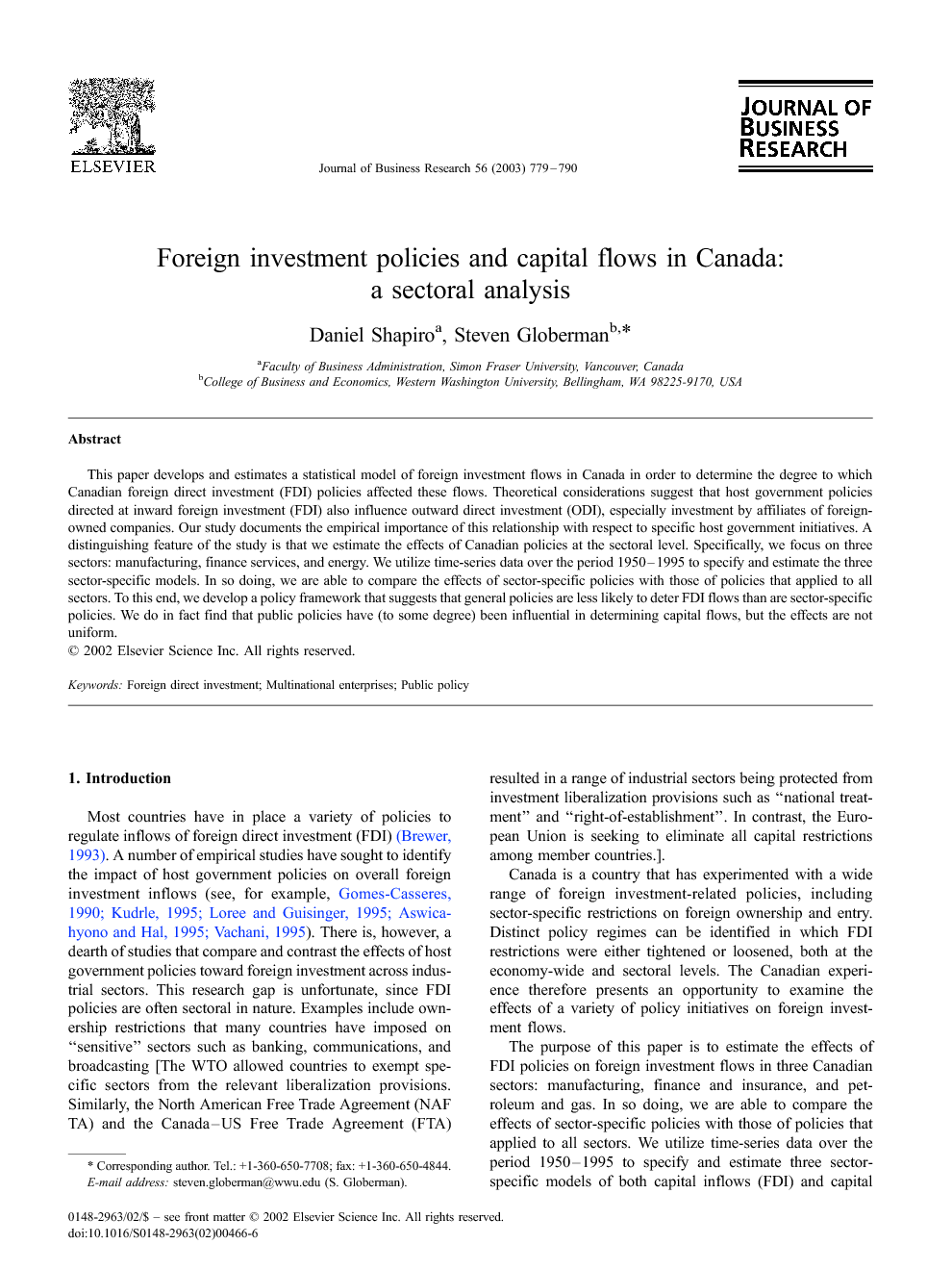 This paper develops and estimates a statistical model of foreign investment flows in Canada in order to determine the degree to which Canadian foreign direct investment (FDI) policies affected these flows. Theoretical considerations suggest that host government policies directed at inward foreign investment (FDI) also influence outward direct investment (ODI), especially investment by affiliates of foreign-owned companies. Our study documents the empirical importance of this relationship with respect to specific host government initiatives. A distinguishing feature of the study is that we estimate the effects of Canadian policies at the sectoral level. Specifically, we focus on three sectors: manufacturing, finance services, and energy. We utilize time-series data over the period 1950–1995 to specify and estimate the three sector-specific models. In so doing, we are able to compare the effects of sector-specific policies with those of policies that applied to all sectors. To this end, we develop a policy framework that suggests that general policies are less likely to deter FDI flows than are sector-specific policies. We do in fact find that public policies have (to some degree) been influential in determining capital flows, but the effects are not uniform.

Most countries have in place a variety of policies to regulate inflows of foreign direct investment (FDI) (Brewer, 1993). A number of empirical studies have sought to identify the impact of host government policies on overall foreign investment inflows (see, for example, Gomes-Casseres, 1990, Kudrle, 1995, Loree and Guisinger, 1995, Aswicahyono and Hal, 1995 and Vachani, 1995). There is, however, a dearth of studies that compare and contrast the effects of host government policies toward foreign investment across industrial sectors. This research gap is unfortunate, since FDI policies are often sectoral in nature. Examples include ownership restrictions that many countries have imposed on “sensitive” sectors such as banking, communications, and broadcasting [The WTO allowed countries to exempt specific sectors from the relevant liberalization provisions. Similarly, the North American Free Trade Agreement (NAFTA) and the Canada–US Free Trade Agreement (FTA) resulted in a range of industrial sectors being protected from investment liberalization provisions such as “national treatment” and “right-of-establishment”. In contrast, the European Union is seeking to eliminate all capital restrictions among member countries.]. Canada is a country that has experimented with a wide range of foreign investment-related policies, including sector-specific restrictions on foreign ownership and entry. Distinct policy regimes can be identified in which FDI restrictions were either tightened or loosened, both at the economy-wide and sectoral levels. The Canadian experience therefore presents an opportunity to examine the effects of a variety of policy initiatives on foreign investment flows. The purpose of this paper is to estimate the effects of FDI policies on foreign investment flows in three Canadian sectors: manufacturing, finance and insurance, and petroleum and gas. In so doing, we are able to compare the effects of sector-specific policies with those of policies that applied to all sectors. We utilize time-series data over the period 1950–1995 to specify and estimate three sector-specific models of both capital inflows (FDI) and capital outflows (ODI). Although foreign investment policies are typically directed at inbound flows, these policies may create an investment climate that simultaneously either encourages or discourages firms resident in Canada to invest abroad (Brewer, 1993). While many policies are explicit in their aim of encouraging investment at home (and thus perhaps reducing investment abroad), some policies may have the unintended consequence of increasing capital outflows. These effects are typically not analyzed, and the evaluation of both within the context of a single analysis is a unique feature of this study. We examine both FDI and ODI flows and employ estimation methods that treat the two equations (FDI and ODI) as independent (ordinary least squares), as well as methods that treat them as a system (seemingly unrelated regression, SUR). The paper proceeds as follows. Section 2 provides a brief description of Canadian government FDI policies implemented at both economy-wide and sector-specific levels, considers the theoretical impacts of FDI policies, and proposes testable hypotheses for both FDI and ODI. Section 3 identifies a regression model used to estimate the theoretical relationships outlined in the preceding section. Section 4 discusses the variables and the data sources, and Section 5 provides the estimation results. Conclusions and policy implications are presented in the last section.

With respect to the policy influences on FDI, the most consistent result that we obtain is that the US–Canada Free Trade Agreement, and its North American extension, is associated with foreign investment flows, mainly out of Canada. Our evidence indicates that there was a net outflow of capital in every sector. In general, FTA–NAFTA was not associated with net foreign investment in Canada, although there is some evidence that there was a trade-induced increase in FDI in manufacturing. We would not conclude that FTA–NAFTA caused a net outflow of capital. The direct investment data for Canada indicate that (in the post-1989 period) Canadian outward direct investment increased especially for destinations other than the US (Blomstrom et al., 1996). It is unclear theoretically why the FTA–NAFTA would stimulate Canadian outward investment to non-US destinations. It is possible that US affiliates in Canada relocated “tariff factories” to lower cost areas while retaining enough value-added activities in North America to qualify for North American content requirements under the relevant agreements. Another possible explanation is that the prospect of the European Union (EU 1992) and the other global events noted above were strong inducements for Canadian and Canadian-based foreign-owned affiliates to invest in Europe and elsewhere. We did find evidence that FIRA had an effect on both capital inflows and outflows, but only in the manufacturing sector, and only in one specification of the manufacturing equation. We found no evidence that FIRA affected capital flows in other sectors, although the FIRA years were associated with higher inflows and outflows of capital in the energy sector. We attribute this to the increased demand for alternative energy sources following the Yom Kippur War of 1973, which nearly coincided with the formation of FIRA in 1974. These positive effects, attributed to FIRA, will reduce FIRA's negative impact on investment flows when total FDI and ODI are examined. Of the sectoral policies examined, the most controversial and widely publicized is certainly the NEP. We did find evidence that the NEP reduced FDI inflows in the energy sector, although the evidence is not as strong as might be expected. However, the effect of the NEP on capital outflows in energy was unambiguous: the program was associated with outflows of capital from the energy sector. We thus confirm the view that the NEP had a negative impact on the investment climate in Canada in the energy sector. The NEP also had an impact on other sectors, particularly manufacturing. We find that the NEP is associated with a net reduction in capital inflows in manufacturing. All specifications suggest that the NEP reduced FDI in manufacturing, while there is less decisive evidence suggesting that it was also associated with outflows of capital. The data are not sufficiently disaggregated to permit us to conclude that the NEP affected the general business climate sufficiently to induce a reduction in nonenergy-related investment in Canada. The decrease in FDI could well be caused by petroleum and chemical firms that are associated with the energy sector, but are classified to the manufacturing sector. Finally, we find that the Bank Act Revisions of 1967 and 1980 had no impact on FDI in the financial services sector, but the deregulation of the Ontario securities markets in 1986 (the “little bang”) may have increased FDI. In terms of ODI, we find that only the revisions to the Bank Act of 1980 seem to have an effect, that of inducing an increase in Canadian investment abroad. We believe that this result is probably confounded with the US IBA of 1978, which provided national treatment for foreign banks. This suggests that in future research, attention should be paid to policy events at home and abroad. In summary, we confirm that FDI in Canada and Canadian direct investment abroad do respond to economic signals, the most important of which are GDP in Canada and abroad, exchange rate variations, and relative wages. These findings are generally consistent with a priori expectations and with other studies. However, we also find that the factors determining FDI and ODI are not necessarily equally important in determining the flows to and from specific subsectors, and that some public policies are important determinants of foreign investment flows. Such variation across sectors, and the importance of public policy, should not be ignored when analyzing foreign investment flows.