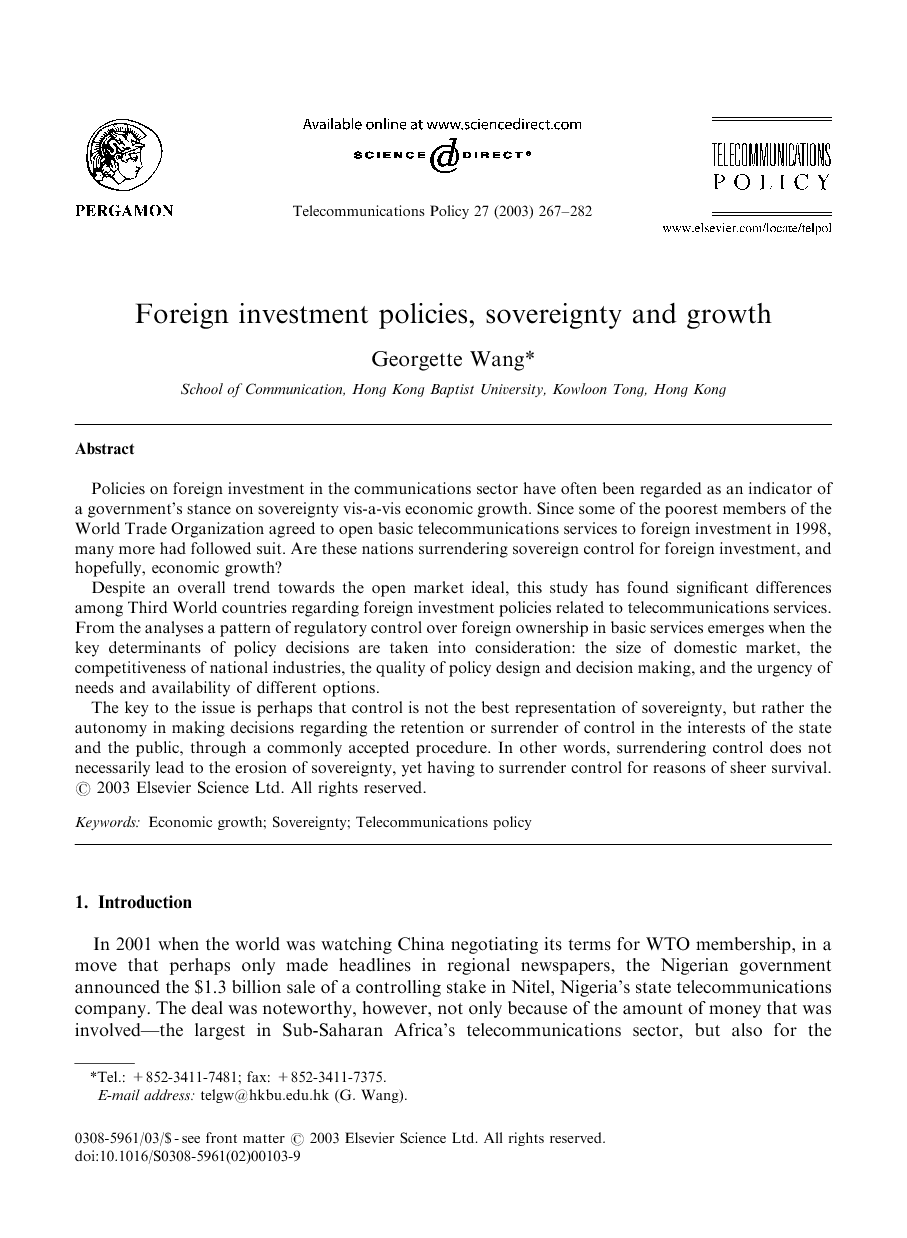 Policies on foreign investment in the communications sector have often been regarded as an indicator of a government's stance on sovereignty vis-a-vis economic growth. Since some of the poorest members of the World Trade Organization agreed to open basic telecommunications services to foreign investment in 1998, many more had followed suit. Are these nations surrendering sovereign control for foreign investment, and hopefully, economic growth? Despite an overall trend towards the open market ideal, this study has found significant differences among Third World countries regarding foreign investment policies related to telecommunications services. From the analyses a pattern of regulatory control over foreign ownership in basic services emerges when the key determinants of policy decisions are taken into consideration: the size of domestic market, the competitiveness of national industries, the quality of policy design and decision making, and the urgency of needs and availability of different options. The key to the issue is perhaps that control is not the best representation of sovereignty, but rather the autonomy in making decisions regarding the retention or surrender of control in the interests of the state and the public, through a commonly accepted procedure. In other words, surrendering control does not necessarily lead to the erosion of sovereignty, yet having to surrender control for reasons of sheer survival.

In 2001 when the world was watching China negotiating its terms for WTO membership, in a move that perhaps only made headlines in regional newspapers, the Nigerian government announced the $1.3 billion sale of a controlling stake in Nitel, Nigeria's state telecommunications company. The deal was noteworthy, however, not only because of the amount of money that was involved—the largest in Sub-Saharan Africa's telecommunications sector, but also for the message it carried: with sovereignty and security as the primary reasons for keeping Nitel under state control in the past, decision makers in Nigeria, like those in China, have changed their attitude toward foreign investment.1 This policy change in Nigeria was by no means an isolated case. In 1998, 72 members of the World Trade Organization (WTO) signed an agreement to open basic telecommunications services to foreign investment. Of the 41 signatories that chose to forego restrictions on foreign ownership, 15 had a per capita income of under $2000. As the WTO negotiations continue, more developing nations are expected to follow suit. This development drastically differed from what was seen as typical of a third-world stance on issues regarding communications and information. With scarce resources and few competitive advantages, these poorer countries fought bitter battles to defend their sovereign rights when issues regarding transborder data flows and direct satellite television broadcasting emerged on the agenda of international negotiations (Wang, 2001). Sovereignty, like patriotism, has frequently been utilized as a grand cause to shroud the complicated workings of forces and interests (Mueller & Lovelock, 2000). However, in this age of globalization, it has not ceased to be an issue of major concern, and policies on foreign investment in basic services—services that make the backbone of a nation's communications and information infrastructure—are often regarded as the indicator of a government's position on sovereignty vis-a-vis trade opportunities and economic growth. What, then, is the significance of a developing nation's open-door policy? Is exploitation by transnationals no longer a concern; or is it perhaps the choice between sovereignty and growth not an issue anymore? Using country cases as examples, this paper examines national policies—primarily those of third world nations—on foreign investment in telecommunications, and the factors involved in related decision-making. The discussion is focused on, but not limited to, telecommunications, since convergence has made it increasingly difficult to separate media communications from telecommunications. It would be a mistake to equate restrictions on foreign ownership with sovereign control in telecommunications. However, it is hoped that the endeavor will provide a clearer picture of the ways in which sovereignty is defined through policy measures and trade agreements, and the role and function of the nation-state in this age of global communications.

The question here, therefore, is not whether, but which, developing nations need to choose between sovereignty and economic growth, why, and how the implications of this affect our understanding of the workings of sovereignty. In 1997, when the WTO Agreement on Basic Services was signed, Pekka Tarjanne, the then Secretary General of the International Telecommunications Union, noted that the old regime of telecommunications based on national sovereignty and corresponding relations had passed.8 However, he also held that we are not likely to go beyond the limits of national sovereignty in the near future. Tarjanne did not point out where these limits to sovereignty lie—perhaps it is impossible to do this. In a constantly changing world, the boundary of sovereignty, as defined and redefined in international conflicts, negotiations and treaties, not only varies from time to time, or event to event, but also from nation to nation. It is never constant, absolute, or universal. Yet, however interpreted, the suspected loss of sovereignty seldom fails to trigger concerns. Globalization and agreements such as GATS threaten sovereignty because decisions that were made by the states are now made at the international level. However, if it is not possible to delineate the boundary of sovereignty, how can we declare its loss? The key to the issue is perhaps that control is not the best representation of sovereignty, but rather the autonomy in making decisions regarding the retention or surrender of control in the interests of the state and the public, through a commonly accepted procedure. In other words, surrendering control does not necessarily lead to the erosion of sovereignty, yet having no alternatives but surrendering control will most likely lead to the erosion of sovereignty. A WTO brochure rebutting attacks on the dispute settlement mechanism has painstakingly emphasized that, although the GATS agreement entails some surrender of sovereignty, the surrender is “voluntary, conditional and temporary”.9 The difference between the voluntary and involuntary surrender of control lies, precisely, in the autonomy in decision-making. This issue of autonomy has helped clarify some of the issues that emerged in the process of privatizing and liberalizing the telecommunications market. If sovereignty is interpreted as the state's power in making autonomous decisions, then what have appeared to be clashes between sovereignty and economic growth are frequently a conflict of policy objectives, e.g., growth, cultural integrity, and national security—whether the government should surrender control to facilitate growth, or retain control to ensure security. In such cases, national sovereignty remains intact; it is endangered only when a government no longer makes autonomous decisions whether to, or not to, surrender control. Unfortunately, such is the situation many of the small low-income and lower-middle income nations find themselves in. Some have insisted that market liberalization and transparent management are the right prescriptions for solving the problem, whether it be a conflict of policy objectives, or a clash between national sovereignty and economic survival. The Jamaican case is a perfect example when the pressure to liberalize the market has in fact helped, rather than undercut, the Jamaican government's position in negotiating for licensing conditions that are in accordance with the national interest. We are reminded that when forces beyond our national borders have increasingly directly or indirectly influenced our lives, the state is not the only power challenged; also on the list are transnationals that have been used to enjoying monopolistic privileges. Globalization and liberalization have in such cases served to reinforce, rather than undermine, the role of the state as the most powerful of social actors. It may be true that the state remains powerful, and that liberalization and globalization remains the best means of achieving growth for even the poorest of nations, but we are also reminded that there are certain preconditions to maintaining both growth and sovereign control, preconditions that do not always exist in Third World nations. Recently, further efforts have been made to help improve telecommunications services in developing nations. The ITU, for example, has set aside US$270 million to assist in the establishment of an e-commerce center, and InfoDev, a World Bank project to boost growth in telecommunications, has been unveiled. These efforts, undoubtedly, will help bridge the gap between developing countries and the rest of the world. However, for developing nations to safely maneuver through the minefield of liberalization, privatization and global market competition, technical support and opportunities are not sufficient. To quote the statement on Canadian sovereignty, “[T]elecommunications, as the foundation of the future society, cannot always be left to the rigours of the market.”