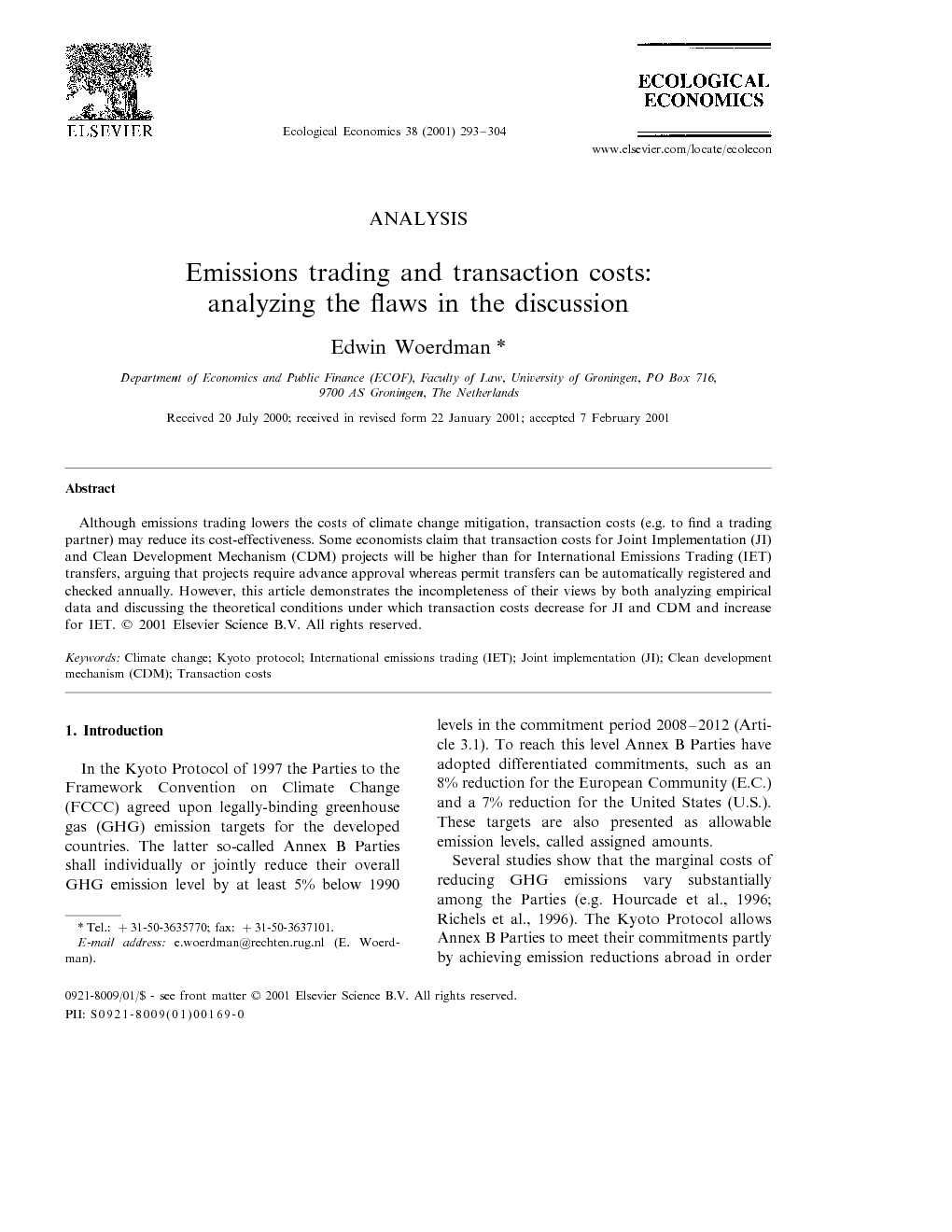 Although emissions trading lowers the costs of climate change mitigation, transaction costs (e.g. to find a trading partner) may reduce its cost-effectiveness. Some economists claim that transaction costs for Joint Implementation (JI) and Clean Development Mechanism (CDM) projects will be higher than for International Emissions Trading (IET) transfers, arguing that projects require advance approval whereas permit transfers can be automatically registered and checked annually. However, this article demonstrates the incompleteness of their views by both analyzing empirical data and discussing the theoretical conditions under which transaction costs decrease for JI and CDM and increase for IET.

In the Kyoto Protocol of 1997 the Parties to the Framework Convention on Climate Change (FCCC) agreed upon legally-binding greenhouse gas (GHG) emission targets for the developed countries. The latter so-called Annex B Parties shall individually or jointly reduce their overall GHG emission level by at least 5% below 1990 levels in the commitment period 2008–2012 (Article 3.1). To reach this level Annex B Parties have adopted differentiated commitments, such as an 8% reduction for the European Community (E.C.) and a 7% reduction for the United States (U.S.). These targets are also presented as allowable emission levels, called assigned amounts. Several studies show that the marginal costs of reducing GHG emissions vary substantially among the Parties (e.g. Hourcade et al., 1996 and Richels et al., 1996). The Kyoto Protocol allows Annex B Parties to meet their commitments partly by achieving emission reductions abroad in order to improve the cost-effectiveness of climate change policy. To do so, they can buy credits, fractions of assigned amounts and/or permits from a foreign country by implementing one or more of the so-called Kyoto Mechanisms: Joint Implementation (JI), the Clean Development Mechanism (CDM) and/or International Emissions Trading (IET). Within the Annex B region a developed country is allowed to buy Emission Reduction Units (ERUs) arising from JI projects on the basis of Article 6 and/or Assigned Amount Units (AAUs) by means of IET based on Article 17. An Annex B Party may also purchase Certified Emission Reductions (CERs) from developing countries by implementing CDM projects on the basis of Article 12. IET is a system-based top-down approach according to which emission reduction is measured from the national commitment. Governments could trade parts of their assigned amounts or firms would be allowed to trade directly with each other if governments divide up their assigned amounts by allocating permits to individual companies or sectors. However, the principles, modalities, rules and guidelines for IET have not been defined under Article 17. JI and CDM are project-based flexible instruments where emission reductions are measured bottom-up from a baseline (Gaast and Woerdman, 1997). A baseline attempts to estimate future emissions at the project location in the absence of the project. Contrary to JI, credits which accrue from CDM projects between 2000 and 2008 can be banked in order to use them for the commitment period (Article 12.10). This gives the CDM a major competitive advantage on an international market for GHG emission reduction entitlements (Woerdman, 1999). However, in contrast with JI Article 6, a text on sink enhancement projects has not been included for CDM projects in Article 12. Generally, emissions trading simulation studies, which suggest that significant efficiency gains can be achieved relative to command-and-control regulation, ignore the possible effect of transaction costs (Kerr and Maré, 1997 and Krutilla, 1999). However, according to several authors (e.g. Hahn and Hester, 1989, Grubb et al., 1998 and Heller, 1999) transaction costs play a key role in the success of an emissions trading system. Already in 1969 Arrow wrote: “The identification of transaction costs in different contexts and under different systems of resource allocation should be a major item on the research agenda of (…) the theory of resource allocation in general” (Arrow, 1969, p. 48). In the debate on economic instruments for environmental protection there is a growing awareness of the importance of transaction costs (Bressers and Huitema, 1999 and Krutilla, 1999). There is past and current anecdotal empirical evidence of the presence of transaction costs in both permit trading markets and project-based credit markets (e.g. Stavins, 1995, Grubb et al., 1998 and Fichtner et al., 1999). The impact of transaction costs on the relative cost-effectiveness of the Kyoto Mechanisms can be crucial as long as the evidence is ambiguous with respect to the question of which (subset of) entitlement(s) will become the cheapest (or will offer the cheapest possibilities) in the market. In the discussion on micro-oriented (emission reduction) projects versus macro-oriented (emissions trading) systems, some economists argue that transaction costs for JI and CDM projects will be higher than for IET since project-based flexible instruments require advance approval of every single trade (verification), while transfers in an emissions trading system will be automatically registered and checked at the end of the year (e.g. Tietenberg, 1992, Mullins and Baron, 1997 and Grubb et al., 1998). The aim of this paper is to criticize this line of reasoning both from a theoretical and an empirical point of view (Woerdman, 2000a and Woerdman, 2000b). In Section 2 the concept of transaction costs is defined. Section 3 discusses the flaws in the theory of transaction costs. Section 4 analyzes the empirical evidence of transaction costs both in existing emissions trading markets and in the pilot phase for Activities Implemented Jointly (AIJ). In Section 5 it is concluded that JI and CDM transaction costs are not necessarily higher than those for IET because this will depend on their design.