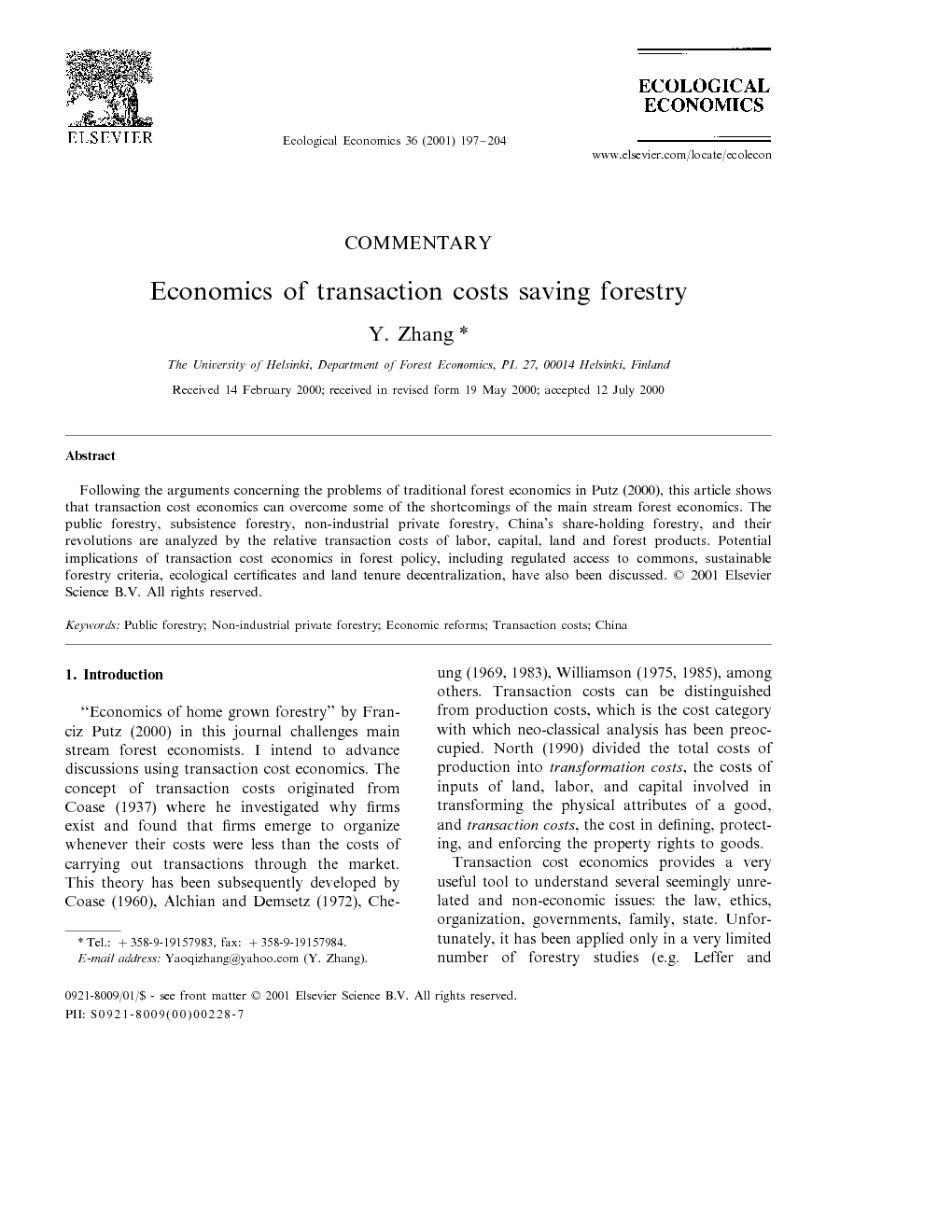 “Economics of home grown forestry” by Franciz Putz (2000) in this journal challenges main stream forest economists. I intend to advance discussions using transaction cost economics. The concept of transaction costs originated from Coase (1937) where he investigated why firms exist and found that firms emerge to organize whenever their costs were less than the costs of carrying out transactions through the market. This theory has been subsequently developed by Coase (1960), Alchian and Demsetz (1972), Cheung, 1969 and Cheung, 1983, Williamson, 1975 and Williamson, 1985, among others. Transaction costs can be distinguished from production costs, which is the cost category with which neo-classical analysis has been preoccupied. North (1990) divided the total costs of production into transformation costs, the costs of inputs of land, labor, and capital involved in transforming the physical attributes of a good, and transaction costs, the cost in defining, protecting, and enforcing the property rights to goods. Transaction cost economics provides a very useful tool to understand several seemingly unrelated and non-economic issues: the law, ethics, organization, governments, family, state. Unfortunately, it has been applied only in a very limited number of forestry studies (e.g. Leffer and Rucker, 1991, Geodecke and Ortmann, 1993, Wang and van Kooten, 1999 and Zhang, 2000a). The Putz article collectively identified that various opportunity costs should be used in evaluation at various management regimes, but he did not use the concept of transaction costs. ‘Home grown forestry’ has its basis both in institutional economics as has been discussed in many important works (e.g. Commons, 1934, Knights, 1965 and Williamson, 1985), and in the specific nature of silviculture as will be briefly discussed in the following section. Then, I will use public-owned forestry, subsistence forestry, non-industrial private forestry, and the currently popular share-holding forestry in China to show that transaction cost economics help to explain that many problems exist in the traditional economic analysis.

Regarding the relatively large magnitude of the transaction costs to production costs in forestry, transaction costs need to be seriously considered in evaluation of forest management and formulating forest policy. For instance, the most widely suggested policy remedy for ‘the tragedy of the commons’ is to change open access to regulated access. Another is to strengthen institutional regulations of the commons. However, whilst the benefit of change from open access to regulated access has been widely recognized, the cost is often neglected. Building such institutions is not costless. The costs of ownership, or termed transaction costs, not only include the cost of obtaining titled or recognized rights, but also the cost of protecting the rights. That is why understanding ‘the tragedy of the commons’ cannot alone solve the problems. Many regulated access schemes cannot survive and finally fail. Most allocable cut regulations on timber felling probably become less efficient when the costs of regulation are considered. A growing number of the versions on sustainable forestry criterion and ecological certificates are emerging (e.g. see Kiker and Putz, 1997). However, very few studies have been conducted on calculation of the potential costs associated with formulation and implementation. I doubt whether the gain can be larger than the cost in implementing the criterion and timber certification. Presently, decentralization and devolution become an important theme in forest management (see Fisher, 1999). However, we should not be limited to the two extremes (state-owned, private-owned), or the one between (community-owned); testable implications may be found somewhere in between along the continuum. Institutional change is not costless or instant (North, 1990 and Zhang, 2000b). Institutions are important factors for forestry development, but the potential costs and time for institutional transformation, i.e. the transaction costs, should be carefully considered.