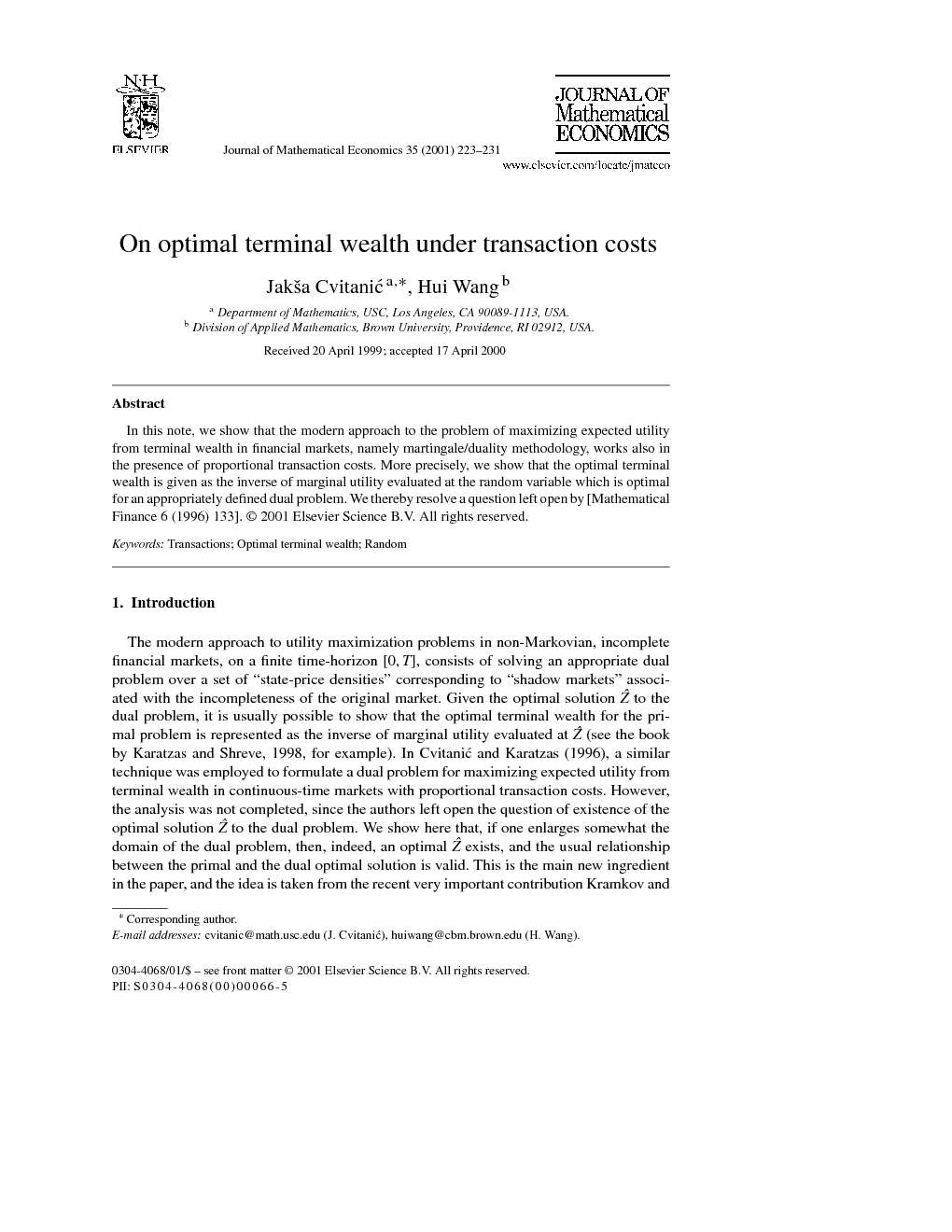 In this note, we show that the modern approach to the problem of maximizing expected utility from terminal wealth in financial markets, namely martingale/duality methodology, works also in the presence of proportional transaction costs. More precisely, we show that the optimal terminal wealth is given as the inverse of marginal utility evaluated at the random variable which is optimal for an appropriately defined dual problem. We thereby resolve a question left open by [Mathematical Finance 6 (1996) 133].

The modern approach to utility maximization problems in non-Markovian, incomplete financial markets, on a finite time-horizon [0, T], consists of solving an appropriate dual problem over a set of “state-price densities” corresponding to “shadow markets” associated with the incompleteness of the original market. Given the optimal solution Ẑ to the dual problem, it is usually possible to show that the optimal terminal wealth for the primal problem is represented as the inverse of marginal utility evaluated at Ẑ (see the book by Karatzas and Shreve, 1998, for example). In Cvitanić and Karatzas (1996), a similar technique was employed to formulate a dual problem for maximizing expected utility from terminal wealth in continuous-time markets with proportional transaction costs. However, the analysis was not completed, since the authors left open the question of existence of the optimal solution Ẑ to the dual problem. We show here that, if one enlarges somewhat the domain of the dual problem, then, indeed, an optimal Ẑ exists, and the usual relationship between the primal and the dual optimal solution is valid. This is the main new ingredient in the paper, and the idea is taken from the recent very important contribution Kramkov and Schachermayer (1999) to the theory of utility maximization in incomplete markets. This enlargement of the dual domain is needed to “close” the set of shadow state-price densities that are natural for this market. Once this is done, the existence in the dual problem is an immediate consequence of a theorem by Komlós (1967) (for recent generalizations of this theorem and further references, see Delbaen and Schachermayer, 1999; see also Schwartz, 1986). However, due to that enlargement, the optimal solution Ẑ to the dual problem is not necessarily a density and one would think that its usual interpretation as a pricing kernel in a shadow market becomes questionable. Nevertheless, as already noted in Kramkov and Schachermayer (1999) in the context of incomplete markets, the optimal dual variable still gives rise to consistent pricing, provided one uses the optimal primal variable (the optimal terminal wealth) as the numeraire. Besides being inspired by the approach of Kramkov and Schachermayer (1999), our approach is also facilitated by the bipolar theorem of Brannath and Schachermayer (1999). The literature on utility maximization under transaction costs usually considers the infinite time-horizon problem and the PDE approach. For a comprehensive treatment and references for such an approach see Shreve and Soner (1994). A recent work in this vein is Cuoco and Liu (1997). The duality approach to markets with transaction costs has also proved to be fruitful for the problem of pricing and super-replicating contingent claims; see the pioneering work of Jouini and Kallal (1995), as well as Kusuoka (1995), Cvitanić and Karatzas (1996), Ortu (1996), Cvitanić et al. (1998), Kabanov (1999).

We have shown that the terminal wealth optimal for the utility maximization problem in a continuous-time market model with proportional transaction costs can be represented as the inverse of the marginal utility evaluated at a random variable optimal for a corresponding dual problem. We achieve this by appropriately defing the space of dual variables, and by using Komlós theorem on almost sure convergent subsequences. We leave open a difficult problem of finding an algorithm for actually constructing the trading strategy correspond- ing to the optimal terminal wealth. The problem of maximizing utility E R T 0 U.c.t// d t from consumption can be dealt with in a similar fashion, by considering the consumption pro- cess c ( ) and corresponding dual processes as random variables on the probability space . [0 ;T ] ; F .T / B [0 ;T ] /; P ⊗ . 1 =T /l/ , where l is the Lebesgue measure on ([0, T ], B ([0, T ])). We plan to consider the challenging problem of studying equilibrium in a market with transaction costs in future research.