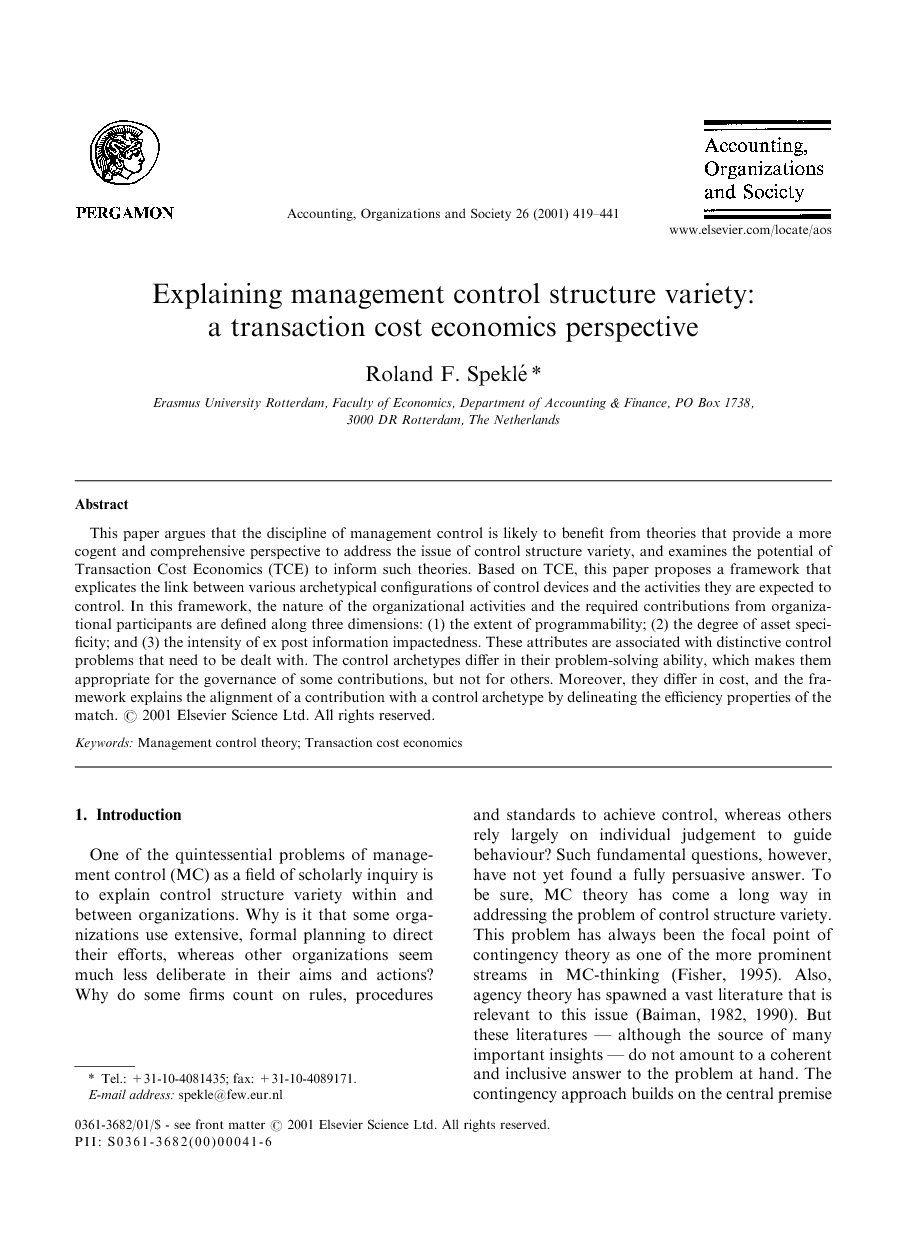 This paper argues that the discipline of management control is likely to benefit from theories that provide a more cogent and comprehensive perspective to address the issue of control structure variety, and examines the potential of Transaction Cost Economics (TCE) to inform such theories. Based on TCE, this paper proposes a framework that explicates the link between various archetypical configurations of control devices and the activities they are expected to control. In this framework, the nature of the organizational activities and the required contributions from organizational participants are defined along three dimensions: (1) the extent of programmability; (2) the degree of asset specificity; and (3) the intensity of ex post information impactedness. These attributes are associated with distinctive control problems that need to be dealt with. The control archetypes differ in their problem-solving ability, which makes them appropriate for the governance of some contributions, but not for others. Moreover, they differ in cost, and the framework explains the alignment of a contribution with a control archetype by delineating the efficiency properties of the match.

One of the quintessential problems of management control (MC) as a field of scholarly inquiry is to explain control structure variety within and between organizations. Why is it that some organizations use extensive, formal planning to direct their efforts, whereas other organizations seem much less deliberate in their aims and actions? Why do some firms count on rules, procedures and standards to achieve control, whereas others rely largely on individual judgement to guide behaviour? Such fundamental questions, however, have not yet found a fully persuasive answer. To be sure, MC theory has come a long way in addressing the problem of control structure variety. This problem has always been the focal point of contingency theory as one of the more prominent streams in MC-thinking (Fisher, 1995). Also, agency theory has spawned a vast literature that is relevant to this issue (Baiman, 1982 and Baiman, 1990). But these literatures — although the source of many important insights — do not amount to a coherent and inclusive answer to the problem at hand. The contingency approach builds on the central premise that the appropriateness of MC structures is affected by some set of circumstantial factors faced by the organization. But this approach is more a general idea than an articulated theory in the sense that it has no a priori intuition of its own as to what the pertinent factors are and as to their likely consequences. Of course, researchers within that stream do have pretty clear notions about the variables and their effects, but these notions come from sources outside contingency theory per se. These sources are diverse and tend to differ widely across researchers, on account of which the contingency stream is rather heterogeneous (cf. Chapman, 1997, Fisher, 1998, Langfield-Smith, 1997 and Otley, 1980). Moreover, contingency models tend to be partial, focusing on elements of control systems (e.g. budgeting systems) as opposed to addressing directly the full configuration of control devices. For these reasons, the contingency approach does not provide a self-sufficient and fully fledged perspective on the issue of MC structure variety. Agency theory suffers from effectually similar weaknesses. Because agency theorists are known to have a strong predilection for formal mathematical modelling, they normally choose to focus on a limited number of well-specified, highly stylized elements of MC systems (cf. Merchant and Simons, 1986 and Scapens, 1991), rather than attempting to capture control in its entirety. They furthermore tend to confine themselves to single period, single agent models (Baiman, 1982 and Baiman, 1990), which may lack representational validity. Therefore, their contribution to knowledge in the field of MC — as that of their contingency theory counterparts — remains fragmented, whereas more inclusive approaches are also needed to understand MC. This paper intends to contribute some insights that may increase the theoretical coherence of the study of MC structure variety. More specifically, it examines the potential of transaction cost economics (TCE; Williamson, 1975, Williamson, 1979, Williamson, 1985 and Williamson, 1996) to provide a cogent, parsimonious perspective that is able to inform the study of MC. A prima facie, this seems a reasonable thing to do, because TCE and MC share a common interest in understanding purposive control, and both are committed to the explanation of control structure choice. TCE has proven quite successful at this in its own domain, and trying to transfer the insights accumulated there to the domain of MC might well be worth the effort. Appearances may be misleading, though, and Section 3 of this paper provides a more thorough examination of the degree of correspondence between commonly held perspectives on what MC is about and on the direction in which to search for explanations on the one hand, and the theoretical angle of TCE on the other. This assessment allows a preliminary consideration of TCE's conceptual relevance to issues of MC, and helps to clarify the general nature and scope of TCE's potential contribution. The second step is to move beyond mere consideration and involves a concrete demonstration of what TCE is able to offer. To this effect, the logic of TCE is asked to speak for itself in Section 4, which presents a tentative transaction cost theory of MC. Section 5 contains a summary and discussion of the argument. But first, Section 2 provides an introduction to TCE's analytical toolbox and line of reasoning.