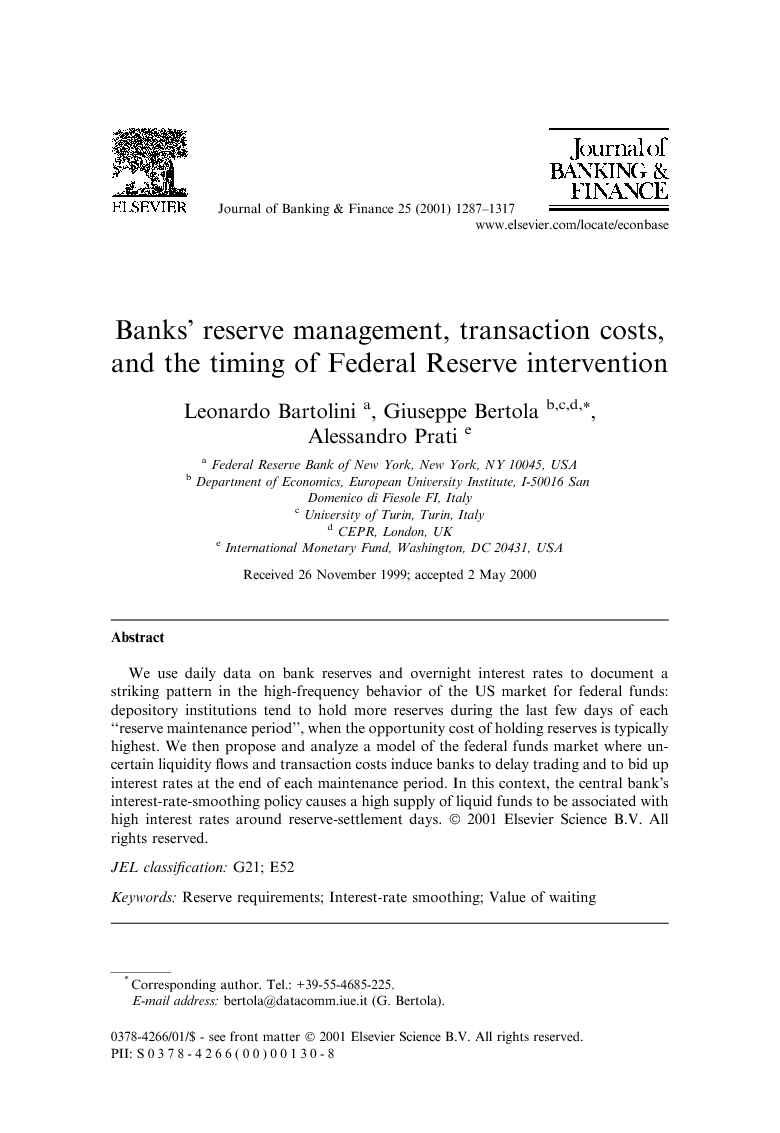 We use daily data on bank reserves and overnight interest rates to document a striking pattern in the high-frequency behavior of the US market for federal funds: depository institutions tend to hold more reserves during the last few days of each “reserve maintenance period”, when the opportunity cost of holding reserves is typically highest. We then propose and analyze a model of the federal funds market where uncertain liquidity flows and transaction costs induce banks to delay trading and to bid up interest rates at the end of each maintenance period. In this context, the central bank’s interest-rate-smoothing policy causes a high supply of liquid funds to be associated with high interest rates around reserve-settlement days.

The high frequency behavior of the interbank market for reserves has been intensely scrutinized by research on banking in recent years. One of the goals of this research has been to identify patterns displayed by money-market data, mostly from the US, and to examine their consistency with the assumption of rational, profit-maximizing behavior of depository institutions. Our paper contributes to this research by documenting and modeling a pattern that is both remarkable and previously unnoticed in the literature on the US market for federal funds: the tendency of US banks to hold – and of the Federal Reserve to provide – the bulk of their reserves during the last days of each “reserve maintenance period” (the bi-weekly period over which banks’ reserves are averaged for the purpose of reserve requirements), when the opportunity cost of holding reserves is typically highest. After documenting this pattern empirically, we rationalize it in the context of a model where banks’ policy of liquidity management interacts with the central bank’s interest-targeting policy, and where transaction costs and liquidity shocks cause both interest rates and bank reserves to rise endogenously at the end of each maintenance period. The main ingredients of our analysis are banks’ uncertainty on their reserve needs when trading reserves is costly, and the Federal Reserve’s interest-rate-smoothing policy. We show that small costs of trading federal funds and uncertainty on reserve flows induce banks to trade late in each maintenance period, so as to conduct federal funds transactions when they have more precise information on their eventual reserve needs. This policy allows individual banks to offset higher reserve-holding costs around period-end by saving on overall transaction costs. The aggregate effect of this policy would only be to cause interest rates to rise at period-end if the supply of reserves remained constant through the maintenance period. If, however, the central bank’s goal is to control the supply of reserves so as to limit fluctuations of market rates around their target, in equilibrium both interest rates and reserves should rise cyclically around period-end, in accordance with the clear empirical patterns of US federal funds data. Our modeling perspective is similar to that of several recent studies of interbank markets, including Kopecky and Tucker (1993), Hamilton (1996), and Clouse and Dow (1999), who first pointed to the importance of trading and other fixed costs in the federal funds market. We build on these studies to develop a more complete account of the role of trading costs in explaining the joint behavior of interest rates and reserves. For instance, we extend Kopecky and Tucker's (1993) work by assuming that trading costs are incurred every day (Kopecky and Tucker assume transactions to be costly only on settlement days), so as to be able to genuinely endogenize differences in behavior between days. Conversely, we strip Hamilton’s (1996) model of a number of accessory assumptions (such as heterogeneous bank behavior, tighter restrictions on banks’ ability to sell rather than buy federal funds, week-end effects, etc.) which blur the analysis of trading costs and lead Hamilton’s simulated settlement-day rates below typical non-settlement-day rates, in contrast with US federal funds data. Our emphasis on the tendency of interest rates to rise on settlement days is also similar to that of Clouse and Dow (1999). Clouse and Dow’s study, however, hinges on the role of fixed costs incurred when borrowing from the discount window. While analytically interesting, this perspective is empirically more problematic, since discount-window lending has decreased dramatically in the US since the banking crisis of the mid-1980s, while the stylized fact we seek to explain has survived unscathed.1 More fundamentally, all these studies feature an exceedingly stylized description of Fed intervention. Hamilton (1996), for instance, abstracts from official intervention altogether, assuming aggregate reserves to remain constant over time. Kopecky and Tucker (1993) and Clouse and Dow (1999) let the Fed issue reserves randomly, irrespective of their impact on interest rates. As a result, these studies – and others in the literature – cannot account for the cyclical reserve patterns we identify in US data. Our paper is structured as follows. Section 2 reviews the main evidence on the high-frequency behavior of US federal funds rates and presents new evidence on the behavior of bank reserves. Section 3 presents a model of the federal funds market, a simplified version of which is solved in Section 4. This simple version of the model yields a number of analytical results and intuition for the more general results that follow. Section 5 solves the more general model in parameterized form, roughly calibrated on US data. Section 6 concludes the paper.

A simple model of the US market for federal funds can explain the tendency of US banks to hold more reserves – and of the Federal Reserve to provide them – on days when the cost of holding reserves is cyclically highest: uncertainty over reserve needs and small costs of trading induce banks to trade mainly when they are endowed with the most precise information on their reserve needs – particularly on settlement days – even if this strategy entails higher costs of carrying reserves overnight. In turn, upward pressure on interest rates around period-end combines with the Fed’s goal to smooth interest rates over time to induce the central bank to provide reserves mostly around the end of each reserve maintenance period. Our model is clearly stylized, and focussed on only a few key features of the US market for federal funds. We designed it with the main goal of replicating the observed correlation between prices and quantities across settlement and non-settlement days. While doing so, we left aside other features of this market – such as week-end effects, heterogeneous bank behavior, and patterns of interest rate volatility. Existing research provides a convincing explanation for these phenomena, which appear analytically unrelated to the role of the transaction strategies on which we focus. Our modeling strategy also disregarded the intriguing – if less significant – pattern of declining reserve holdings and interest rates during the first few days of typical maintenance periods. However, we conjecture that a multi-period model of liquidity management in the same spirit of our model should be able to explain this pattern. If banks behave as our model predicts, they would hold unusually high reserves on settlement days, and dispose of these excess reserves in the following period, actually unwinding their positions only when reached by a liquidity shock sufficiently large to justify the payment of the transaction cost. Thus, transaction costs would lead to serially correlated demand for reserves, in analogy to models of investment or hiring and firing in models with costly capital and labor adjustment. To the extent that the Fed accommodates this demand only imperfectly, any such cyclical behavior on the market’s demand side would also lead to a cyclical behavior of interest rates. Other aspects of the federal funds market deserve closer scrutiny and are related to this paper’s goals and modeling perspective. Our model, for instance, implies that banks prefer to transact late in the maintenance period, when more relevant information is available, suggesting that the volume of gross transactions should rise around end-period. It would be interesting to verify this implication, but daily data on gross interbank transactions are not available. Recently, Dell’Ariccia and Garibaldi (1999) have also shown that search costs in credit markets may help explain some features of the dynamics of gross credit flows at the quarterly frequency. This view, applied to our study’s higher frequency, points to a channel that would strengthen our results: if settlement-day transaction costs fall as trade volume rises (e.g., because of the associated decline in “search” costs), then banks’ tendency to cluster trading on these days should be exacerbated. Finally, future research should offer a more detailed analysis of market imperfections and institutional features which we captured under the gross heading of “transaction costs”. We suspect, for instance, that indivisibilities in federal funds trades and rigidities induced by Fed regulations (especially penalties for overnight overdrafts) may also induce banks to defer federal funds trading to the late portion of each maintenance period. A formal analysis of these rigidities is more difficult than that of transaction costs, and is best deferred to further research. In general, however, a more detailed and realistic description of constraints and frictions faced by market participants should yield results similar to those of this paper, as long as a bias towards “late” trading – whether stemming from transaction costs, or other sources – is preserved.