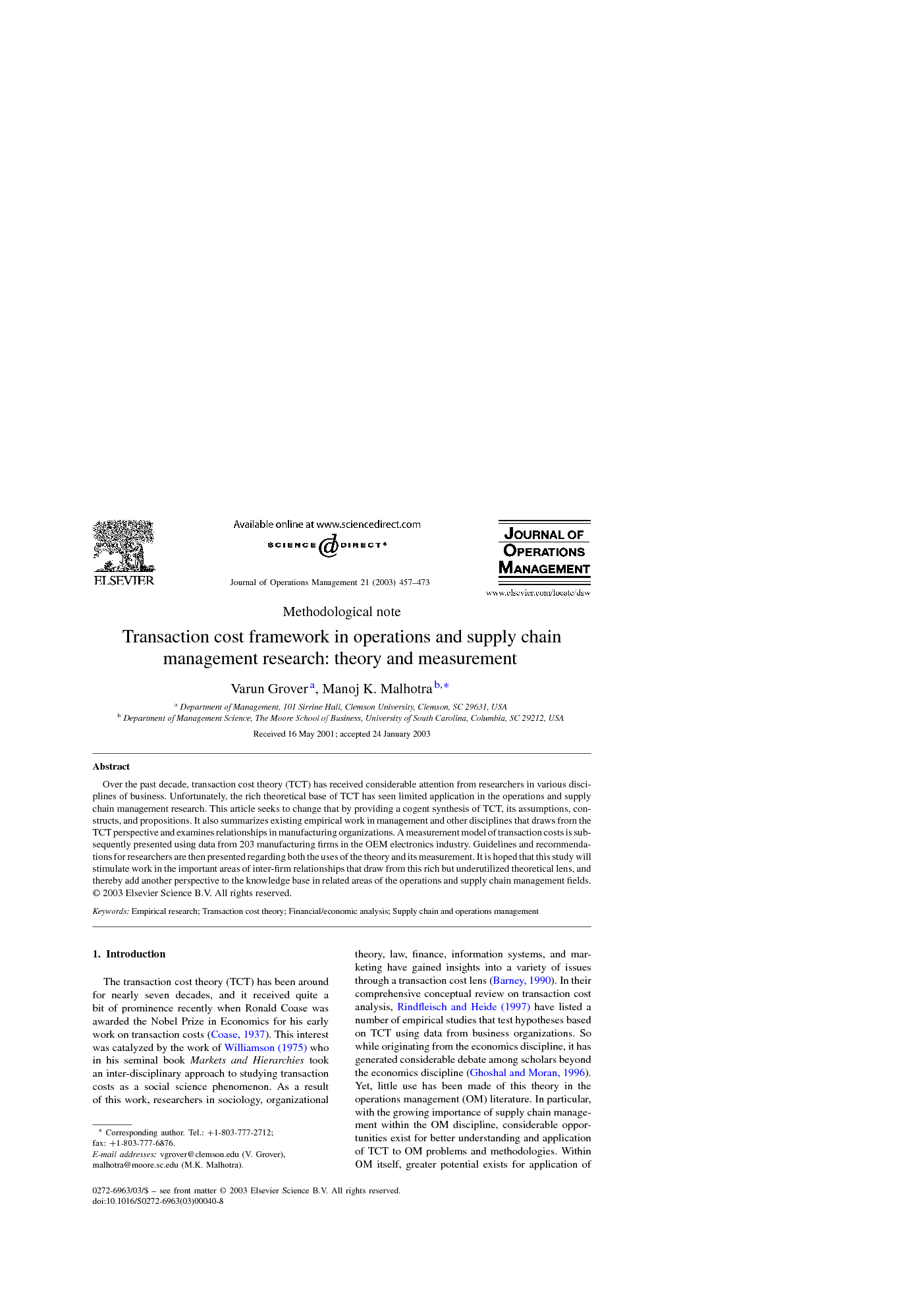 Over the past decade, transaction cost theory (TCT) has received considerable attention from researchers in various disciplines of business. Unfortunately, the rich theoretical base of TCT has seen limited application in the operations and supply chain management research. This article seeks to change that by providing a cogent synthesis of TCT, its assumptions, constructs, and propositions. It also summarizes existing empirical work in management and other disciplines that draws from the TCT perspective and examines relationships in manufacturing organizations. A measurement model of transaction costs is subsequently presented using data from 203 manufacturing firms in the OEM electronics industry. Guidelines and recommendations for researchers are then presented regarding both the uses of the theory and its measurement. It is hoped that this study will stimulate work in the important areas of inter-firm relationships that draw from this rich but underutilized theoretical lens, and thereby add another perspective to the knowledge base in related areas of the operations and supply chain management fields.

The transaction cost theory (TCT) has been around for nearly seven decades, and it received quite a bit of prominence recently when Ronald Coase was awarded the Nobel Prize in Economics for his early work on transaction costs (Coase, 1937). This interest was catalyzed by the work of Williamson (1975) who in his seminal book Markets and Hierarchies took an inter-disciplinary approach to studying transaction costs as a social science phenomenon. As a result of this work, researchers in sociology, organizational theory, law, finance, information systems, and marketing have gained insights into a variety of issues through a transaction cost lens (Barney, 1990). In their comprehensive conceptual review on transaction cost analysis, Rindfleisch and Heide (1997) have listed a number of empirical studies that test hypotheses based on TCT using data from business organizations. So while originating from the economics discipline, it has generated considerable debate among scholars beyond the economics discipline (Ghoshal and Moran, 1996). Yet, little use has been made of this theory in the operations management (OM) literature. In particular, with the growing importance of supply chain management within the OM discipline, considerable opportunities exist for better understanding and application of TCT to OM problems and methodologies. Within OM itself, greater potential exists for application of TCT to manufacturing rather than services, as also evidenced by a preponderance of TCT studies that have been conducted in the past using data gathered from manufacturing firms (Rindfleisch and Heide, 1997). So we will retain in our study a focus on the manufacturing sector within the broader rubric of OM discipline, and investigate the application of TCT to operations and supply chain management problems. TCT, as discussed by Williamson (1975), puts the notion of “transactions” or units of exchange as the focal point of the theory. He provides a carefully crafted perspective on the nature of governance structures that can exist between organizations under various exogenous conditions. A popular perspective espoused by Williamson (1975) argues for market versus hierarchical governance structures based on the level of opportunism present in the relationships. Markets and hierarchies (or firm) are proposed as alternative instruments for completing a set of transactions. The choice of instrument (alternatively also known as governance mechanism) depends on the relational efficiency of each. A number of antecedent conditions can influence governance mechanisms through the level of transaction costs. TCT, while representing an economic perspective differs from classical economics by incorporating the concept of a firm as germane to its analysis. A firm is viewed as a governance structure as opposed to a production function. TCT’s basic premise is that the cost of doing transactions (i.e. the cost of economic exchange) could be too high under certain conditions. In those cases, organizing the economic transaction within the firm or hierarchy governance structure might be superior to organizing it as a market-based governance structure. The basic tenets of this theory are based on assumptions about human behavior that have been refined by Williamson ( Williamson, 1975 and Williamson, 1985 from Coase’s original work. It is unfortunate that despite the rich perspectives offered by TCT, its use by researchers in OM has been limited at best. In particular, considerable opportunities exist within the OM discipline for evaluating many supply chain management related issues from the TCT perspective. Why this has not occurred may partially be due to the relatively recent attention paid to social science representations and methods as applied to OM, the limited use of economics as a reference discipline, the unique and occasionally opaque vocabulary associated with the theory, and the lack of clear direction on applicability of TCT to OM issues. We seek to change this by making a case for TCT specifically within the OM arena and attempting to provide conceptual and empirical facilitation for future research. Specifically, this study has five objectives: To provide a cogent discourse on TCT, its key assumptions, constructs, and propositions. To summarize empirical studies in other disciplines which have obtained data within a manufacturing or operations context. To provide a general description and overview of TCT-based constructs that are available in the literature to OM researchers for future research. • To describe the empirical measurement of the central transaction cost construct that has not been as well operationalized in prior literature. To describe implications of the conceptual, empirical, and operational synthesis for future research in OM and supply chain management in particular. The next section develops the assumptions, constructs and propositions of TCT. This is followed by a summary of empirical research that uses the TCT perspective and is relevant to OM research since the data in these studies are from manufacturing firms. The final section builds upon the first four sections by describing implications for future work in operations and supply chain management research.

We have argued in this paper that researchers in the OM field need to take advantage of TCT and the repertoire of knowledge bases vested within this theory. We think that TCT is relevant for studying supply chain management and other relevant issues within the OM discipline, and therefore should be explicitly recognized in our future research and teaching endeavors to create more holistic perspectives. Consequently, we have evaluated and summarized prior TCT research in manufacturing organizations that has been conducted from the vantage point of disciplines other than OM, with the hope that OM researchers will integrate these results with prior findings in their own field in related areas. We have also developed and presented a psychometrically sound measure of transaction costs, which we believe will be very useful in actually conducting TCT-based empirical studies. Finally, we have outlined a sampling of future work in operations and supply chain management that can be pegged to the TCT framework. These future research directions point towards the holes and opportunities, and the issues contained within it outline an agenda for TCT-based research. The subheadings for research projects, when taken together, represent the framework within which future TCT work can occur.We believe that it is both appropriate and important for OM researchers to draw from important referential theories in order to guide their hypotheses. The summary of prior work listed in Table 1 comes from other disciplines, and should be integrated with the existing OM literature to propose new hypotheses. Future studies that utilize TCT to propose and test such hypothesis and related theories will provide alternative interpretations of empirically observed phenomenon in these areas, and thereby enrich operations and supply chain management literature. We hope that this article acts as a catalyst in facilitating this process and promoting research that is meaningful for both researchers and practitioners alike.