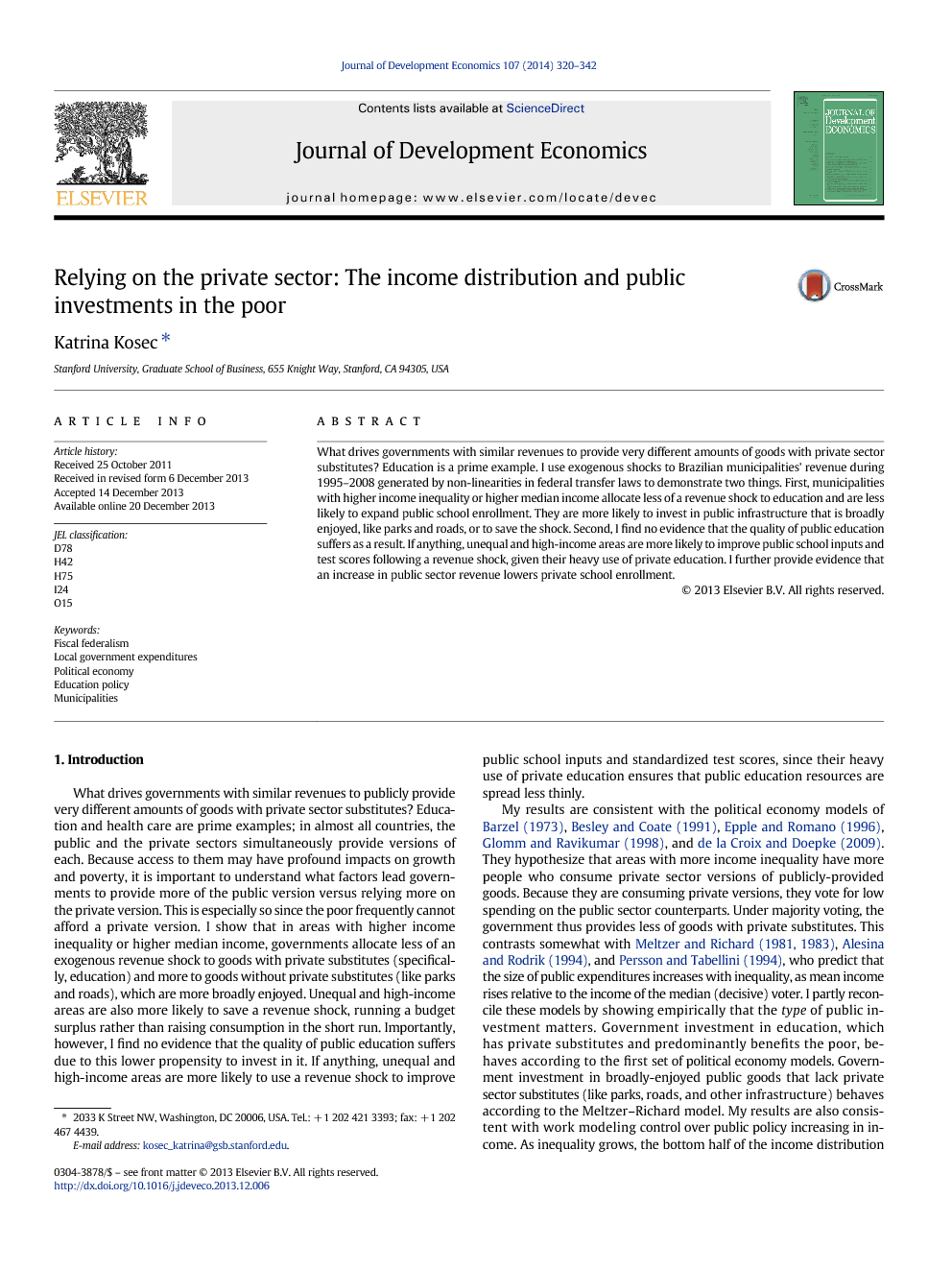 What drives governments with similar revenues to provide very different amounts of goods with private sector substitutes? Education is a prime example. I use exogenous shocks to Brazilian municipalities' revenue during 1995–2008 generated by non-linearities in federal transfer laws to demonstrate two things. First, municipalities with higher income inequality or higher median income allocate less of a revenue shock to education and are less likely to expand public school enrollment. They are more likely to invest in public infrastructure that is broadly enjoyed, like parks and roads, or to save the shock. Second, I find no evidence that the quality of public education suffers as a result. If anything, unequal and high-income areas are more likely to improve public school inputs and test scores following a revenue shock, given their heavy use of private education. I further provide evidence that an increase in public sector revenue lowers private school enrollment.

A long-standing debate in the theory literature concerns how the distribution of income affects the size of government and its propensity to invest in publicly-provided goods. The models of Barzel (1973), Besley and Coate (1991), Epple and Romano (1996), Glomm and Ravikumar (1998), and de la Croix and Doepke (2009) suggest that greater inequality leads to less redistribution, while Meltzer and Richard, 1981 and Meltzer and Richard, 1983, Alesina and Rodrik (1994) and Persson and Tabellini (1994) predict that it leads to more redistribution. This paper partly reconciles these models by focusing on the type of public sector investment. I use credibly exogenous shocks to Brazilian municipalities' revenue during 1995–2008 generated by non-linearities in federal transfer laws to examine the effects of the distribution of income on goods with vs. without private sector substitutes. This reveals an interesting distinction between the two types of goods. Municipalities with higher income inequality or higher median income allocate less of a revenue shock to education (a publicly-provided good that predominantly benefits the poor) and are less likely to expand public school enrollment. However, they are more likely to invest in public infrastructure, like parks and roads, which is enjoyed by everyone. They are also more likely to save a revenue shock, running a budget surplus. Yet I find no evidence that the quality of public education suffers due to this lower propensity to invest. If anything, unequal and high-income areas are more likely to use a revenue shock to improve public school inputs and test scores. These findings have at least three policy implications. First, revenue transfers that target the poorest local governments and those with the lowest income inequality are likely to be most effective in expanding public education investment and public school enrollment. Policymakers in those municipalities already have a relatively strong desire to spend their next R$ on these uses, and national policymakers should take this into account. In the Brazilian case, a nation-wide education finance equalization reform would boost education spending in uniformly poor municipalities better than a within-state distribution like FUNDEF/B, as there is substantial cross-state revenue inequality. Second, the existence of a vibrant private education sector is important. By absorbing many richer students, it can ensure that limited education resources are not spread too thinly, and quality remains high—especially in highly unequal and high-income areas that are relatively less likely to invest a revenue shock in education. Finally, the steady decline in inequality taking place in Brazil has real implications for public investments—as do changes in inequality in other parts of the world. In particular, one can expect local governments to become increasingly more likely to invest a revenue shock from FUNDEF/B into education and to expand public school enrollment. One could imagine that this would make it increasingly less necessary to mandate minimum expenditures on education.