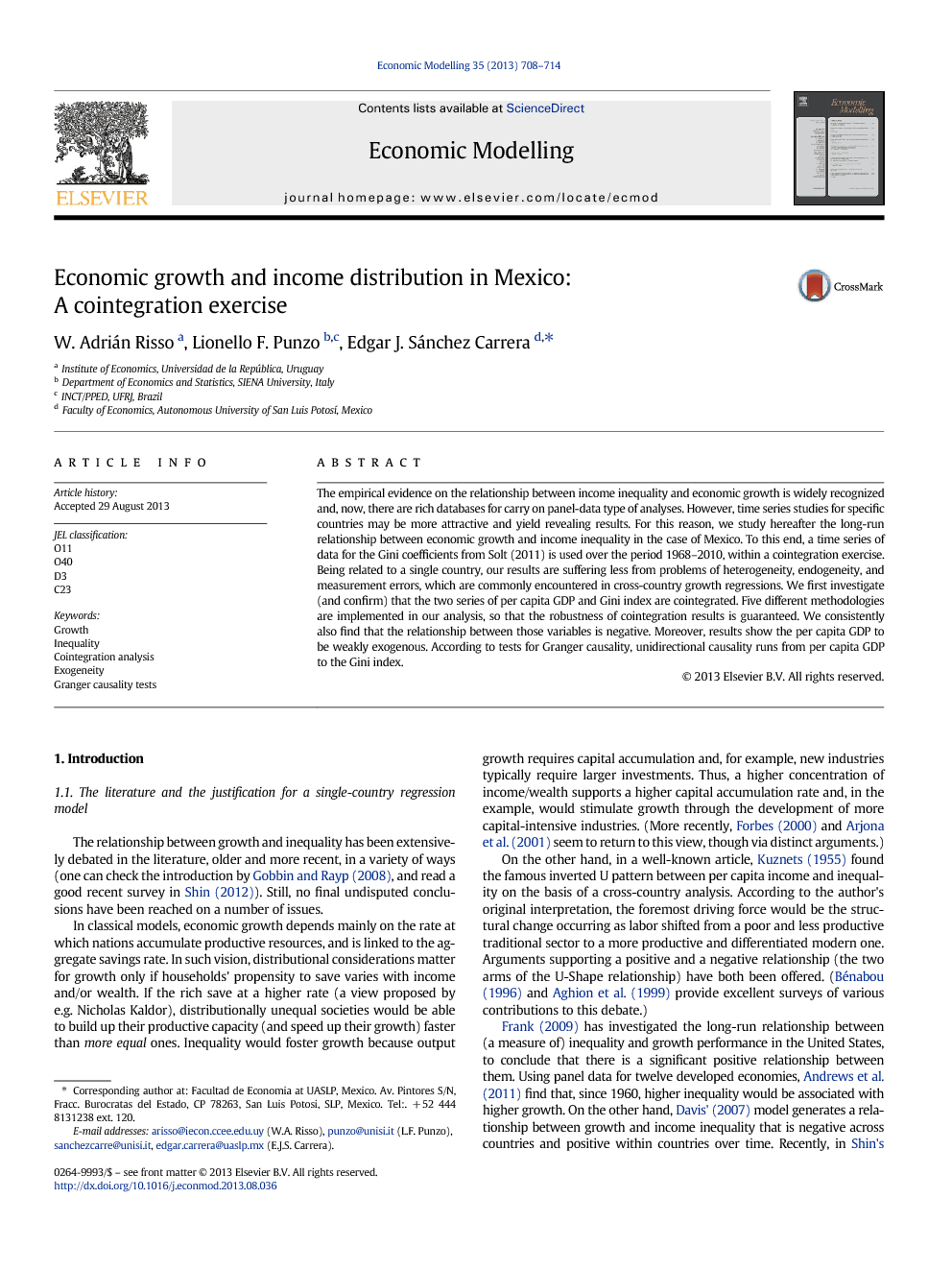 The empirical evidence on the relationship between income inequality and economic growth is widely recognized and, now, there are rich databases for carry on panel-data type of analyses. However, time series studies for specific countries may be more attractive and yield revealing results. For this reason, we study hereafter the long-run relationship between economic growth and income inequality in the case of Mexico. To this end, a time series of data for the Gini coefficients from Solt (2011) is used over the period 1968–2010, within a cointegration exercise. Being related to a single country, our results are suffering less from problems of heterogeneity, endogeneity, and measurement errors, which are commonly encountered in cross-country growth regressions. We first investigate (and confirm) that the two series of per capita GDP and Gini index are cointegrated. Five different methodologies are implemented in our analysis, so that the robustness of cointegration results is guaranteed. We consistently also find that the relationship between those variables is negative. Moreover, results show the per capita GDP to be weakly exogenous. According to tests for Granger causality, unidirectional causality runs from per capita GDP to the Gini index.

This paper has two contributions. First is the study of a relevant question, the relation between inequality and economic growth for a country, Mexico, and of its properties. Second is the use of several different methodologies to produce and confirm empirical results. The main findings are that i) there is indeed in Mexico (as is almost intuitively true), a long-run (in the sense of cointegrating) relationship between income inequality (measured by the Gini coefficient) and per capita GDP, ii) that such relationship is negative, and moreover, iii) the unidirectional causality goes from LnPCGDP to LnGINI. Our findings can be put, e.g., against the predictions of Kaldor-type models (where the causality relation is reversed from what we have here) or of the Kutznets curve (where the relation is unstable as it goes through phases of growth, while our relation is a long run one). It is clear that in a country such as Mexico, policies for growth also have broader effects as they deliver a bonus to a wider population. This is consistent with what we know, i.e. that in certain countries, recent growth has gone along with a diminishing concentration of income and a growing middle class. However, while some other less developed countries have seen a re-distribution of the benefits of growth, the contrary has happened in economies that until recently had been known for their better or more even distribution of income and wealth. So, the idea put forward by e.g. Barro (2000) can be reworded as saying that there are distinct “clubs of countries” each club sharing a model of growth defined in terms of the relationship distribution-growth. The whole “growth convergence” issue could be re-examined in these terms. On the other hand, targeting policies would have to be different from club to club. In the Mexico's club, if such a club exists, the target would be growth, the consequence the delivery of a fairer distribution of the benefits from it. The question becomes: what should be listed in an effective growth agenda? In econometric terms there apparently are some explicatory variables behind our per capita growth; they need to be made explicit and become policy instruments and/or objectives of such an agenda. Growth literature in recent years has produced a number of valuable results and many insights. Education, R & D and innovation, openness and international trade institutions are some of the sources of growth. Many emerging countries seem to be following such growth agenda very seriously, and this is the likely reason of their success. Not all such variables are, however, amenable to speedy adjustment or can be subjected to intervention effective in the short term, institutions being obviously one of them. Thus, while recent work has enhanced our understanding of the interplay between inequality and growth, much remains to be done before we can confidently design an adequate policy mix producing the best chance to grow and at the same time to reduce inequality. Although in our exercise data seems to speak for itself, nevertheless, as with any other study, we have to recognize that it can be improved along many dimensions. For instance, research could focus on using alternative inequality measures for income and/or wealth, or on levels of education, R & D or other sources of growth. This could prove difficult for the scarcity of long-time series data, so that this is also an area to work on. However, probably the step to be taken next is to analyze whether distinct models of growth, as defined above, exist within emerging economies (and compare with developed ones): does the relation we have found, hold for all countries (such as the BRICS, the early third Millennium success story)? Or our idea of distinct growth clubs is better suited to capture a varied reality?