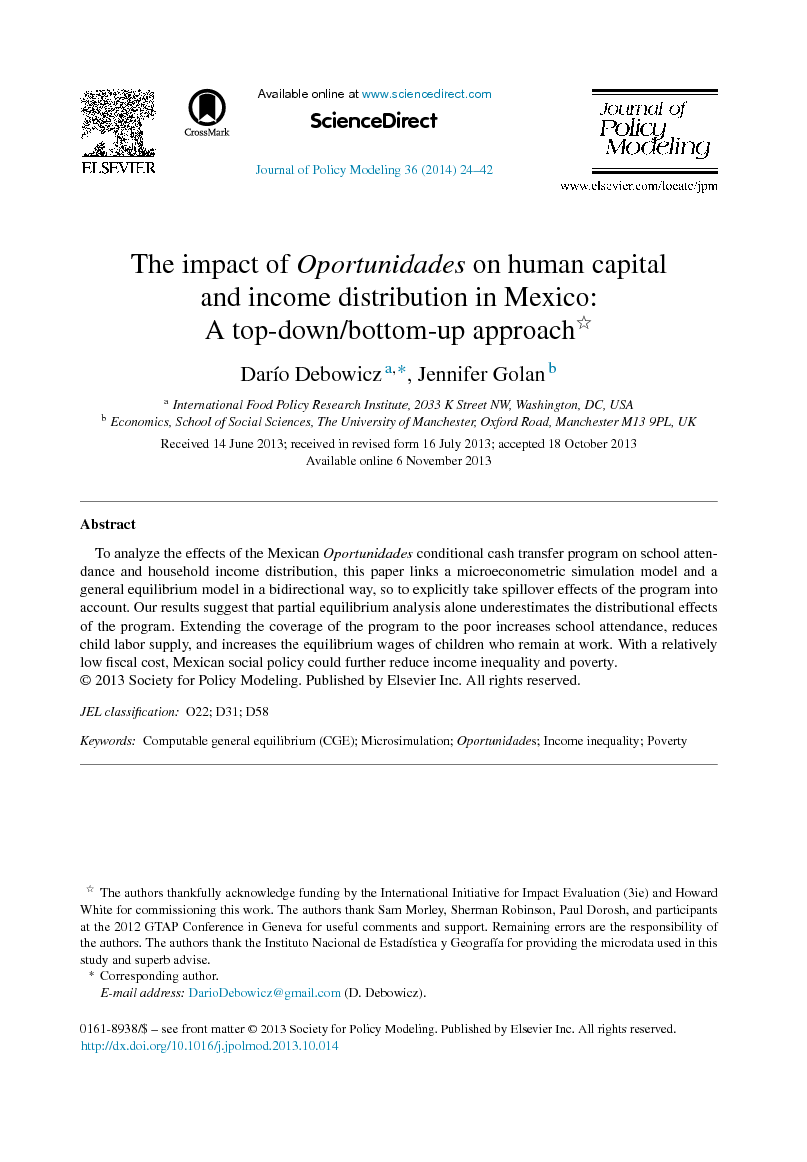 To analyze the effects of the Mexican Oportunidades conditional cash transfer program on school attendance and household income distribution, this paper links a microeconometric simulation model and a general equilibrium model in a bidirectional way, so to explicitly take spillover effects of the program into account. Our results suggest that partial equilibrium analysis alone underestimates the distributional effects of the program. Extending the coverage of the program to the poor increases school attendance, reduces child labor supply, and increases the equilibrium wages of children who remain at work. With a relatively low fiscal cost, Mexican social policy could further reduce income inequality and poverty.

The Oportunidades conditional cash transfer (CCT) program is estimated to transfer 14 billion Mexican pesos (Mexico and Ministry of Finance, 2011), or 1.1 billion U.S. dollars, per year, reaching 5.8 million households (SEDESOL 2012) and representing a substantial source of income for the poor. As such, it is a major social program of the Mexican government. A successor to PROGRESA (Programa de Educacion, Salud y Alimentacion, the Education, Health and Nutrition Program), Oportunidades has attracted national and international attention (World Bank, 2006). The program aims to develop the human capital of poor households (Skoufias, 2005) by providing cash transfers under the condition that households behave consistently with the accumulation of human capital. The program has three components—education, nutrition, and health—with education the largest (Azevedo & Robles, 2010). The program is operated by SEDESOL (Secretaría de Desarrollo Social, the Social Development Secretariat) and seeks to eliminate the intergenerational transmission of poverty. Oportunidades cash transfers are individually delivered to the mothers of children of school age and vary depending on the number of children enrolled in school and their grade levels, and their attendance at health centers. All mothers participating in the program are informed with individually delivered pamphlets that the benefits of Oportunidades are not conditioned on participation in any political event or voting for any political party, and the rules of the program and the number of beneficiary families by locality, municipality, and state are available on the Internet1 and in the Federal Register (Levy, 2006). Extensive evaluation of the program (Behrman et al., 2005, Levy, 2006, Parker, 2005 and Schultz, 2004) has led to a consensus that the program enhances welfare in several dimensions: nutrition (Attanazio and Angelucci, 2009 and Hoddinot et al., 2003); health (Gertler, 2004), and school attendance and incomes of the poor (Azevedo & Robles, 2010). Azevedo and Robles (2010) examine the effects of Oportunidades using the microsimulation model developed by Bourguignon, Ferreira, and Leite (2003) (BFL henceforth) to analyze the partial equilibrium effects of the transfers on children's time allocation, relaxing its identifying assumption, and applying it to Oportunidades. They find that increasing school attendance for higher-grade-level students could be relatively expensive, while shifting the subsidies from children in primary education to students in advanced grades could raise overall school enrollment in Mexico with no additional cost for the program. However, national-scale CCTs in support of the poor can have important indirect general equilibrium effects. Only a combined macro–micro model is able to fully take these effects into account (Bourguignon, Bussolo, & Cockburn, 2010). This paper analyzes the impact of the educational Oportunidades transfer on child labor supply, income distribution, and poverty by explicitly taking the program's spillover effects into account. To our knowledge, this is the first study to link the BFL behavioral microsimulation model to a countrywide computable general equilibrium (CGE) model that considers the general equilibrium effects of the program. Using this integrated model and a comparative statics approach, our study takes a series of snapshots of observed and counterfactual scenarios in order to shed light on the effects of the Oportunidades program—effects that are actually perceived over time by the Mexican inhabitants. Ultimately, this paper hopes to contribute to the design of social policy by informing the decisionmaking process using a combined macro–micro model. The paper is organized as follows. The next section provides a review of relevant macro–micro modeling approaches. Section 3 develops a macro–micro model that explicitly captures CCTs and allows the macro and micro components of the model to communicate iteratively in a bidirectional way until converging on a joint equilibrium. Section 4 applies the combined macro–micro model to the Mexican Oportunidades program. The section also contrasts the general with the partial equilibrium effects of the program. The final section concludes.

National-scale CCT programs in support of the poor can have significant indirect general equilibrium effects. Only a combined macro–micro modeling approach is able to take these effects fully into account when estimating the economic impact of this type of program. This paper combines a microsimulation model with a general equilibrium model, both of which are well established, and solves for an equilibrium that jointly satisfies the utility-maximizing decisions regarding children's time allocation and the equilibrium of the countrywide factor and commodity markets. Applying the combined model to the Oportunidades CCT program in Mexico, we find that the program improves household income distribution and poverty indicators in Mexico, and that an extension of the coverage of the program to all moderately poor households could improve these indicators further. Our results suggest that disregarding general equilibrium effects, which is typically the case in program evaluation, may underestimate the distributional effects of the Oportunidades program, and similar types of programs (as appropriate recalibration of the parameters of the model allows its application to other national-level CCT programs in developing countries). In particular, we find that by raising the opportunity cost of work through the provision of transfers conditional on school attendance, an expansion of the Oportunidades educational transfer to all the moderately poor could reduce child labor supply and increase the wages earned by children at work, by a double-digit magnitude. The incremental increase in child earnings indirectly benefits poor households that keep their children at work and thus improves contemporaneous poverty and income distribution indicators to a greater extent than partial equilibrium analysis suggests. While a partial equilibrium analysis suggests that the program extension would lead to a 1.8 percentage point contemporaneous decrease in poverty, the poverty-reducing effect of Oportunidades reaches 2.7 percentage points once the general equilibrium effects are also taken into account. Our estimates imply that it would be advisable for the Mexican government to extend the program, given that this would lead to a substantial improvement in school attendance and a reduction in poverty at only a moderate cost in terms of public expenditure. We also find that an increase in the skills of the future workforce, generated by lagged human capital acquisition through the existing Oportunidades program, could increase the future incomes of poor households, reducing the poverty rate by approximately 1.4 percentage points in the long term. By including not only the Oportunidades transfers, but also overall household income as determinants of child labor supply in our model, our results suggest that for fighting the worst forms of child labor, policy makers need to adopt integrated responses that include social protection as well as jobs and decent work for parents that help to keep girls and boys in school, which is in line with the ILO Convention 182 (ILO, 1999). While advantageous in various ways, the combined model has three serious limitations that future research could overcome. First, the model is static and, as such, does not allow us to trace the time path of the income changes triggered by the program and the corresponding changes in lifetime income. Second, our model does not provide a cost estimate of the additional expenses the government would have to take into consideration so to maintain educational quality in the Mexican society if intending to roll out the existing program. Third, the microsimulation model does not capture existing intrahousehold decisionmaking mechanisms that are potentially important in the determination of children's time allocation and indirectly in determining the distributional effects of the program.