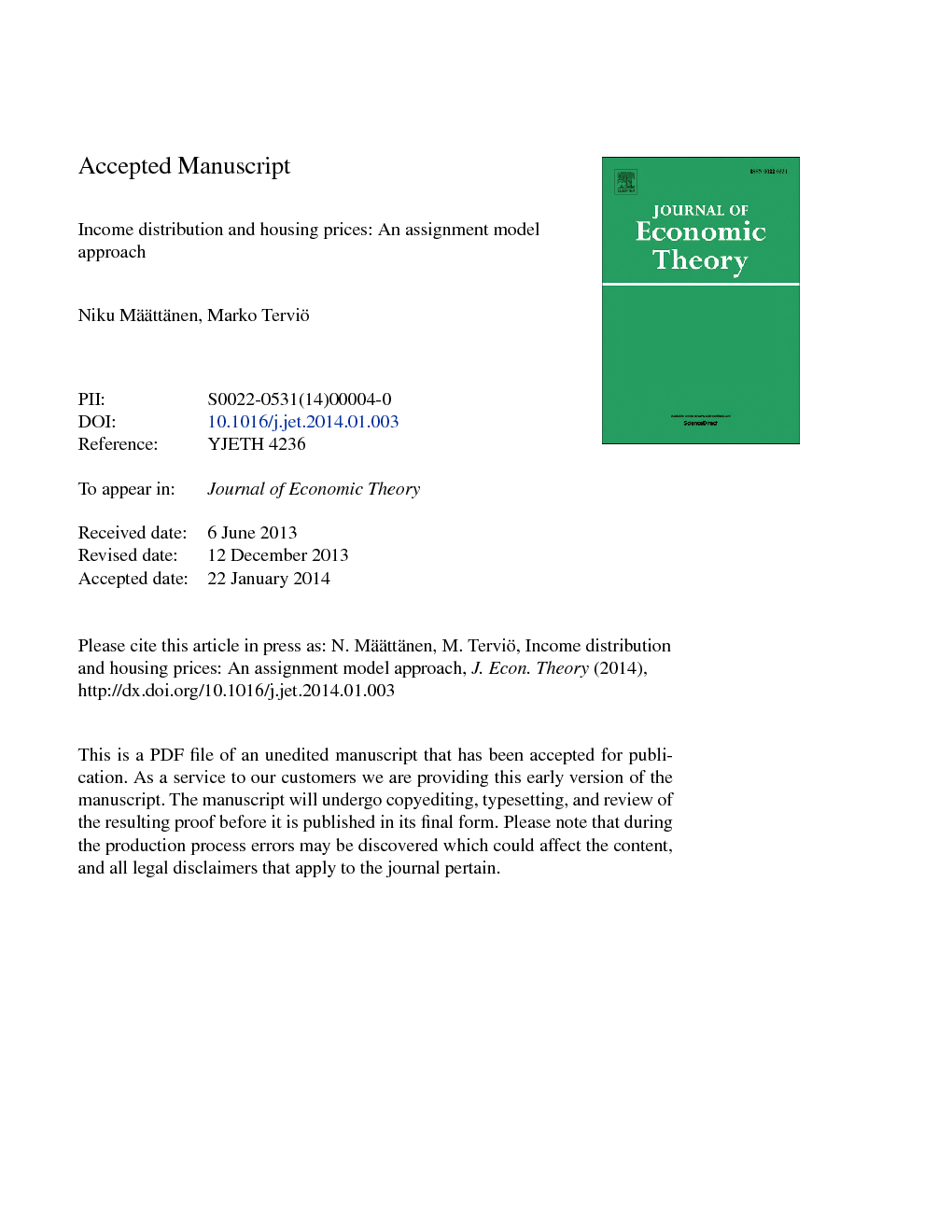 We present a framework for studying the relation between the distributions of income and house prices that is based on an assignment model where households are heterogeneous by incomes and houses by quality. Each household owns one house and wishes to live in one house; thus everyone is potentially both a buyer and a seller. In equilibrium, the distribution of prices depends on both distributions in a tractable but nontrivial manner. We show how the impact of increased income inequality on house prices depends on the shapes of the distributions, and can be inferred from data. In our empirical application we find that increased income inequality between 1998 and 2007 had a negative impact on average house prices in 6 US metropolitan areas.

We have presented a new framework for studying the relationship between the income distribution and the housing price distribution. In the model houses are heterogeneous and indivisible. The key element is that all houses are owned by the households, and, due to concave utility, their reservation prices as sellers depend on the opportunities available to them as buyers, which in turn depend on their incomes and on the prices of other houses. Thus, our model provides a framework for analyzing how income differences get capitalized into house prices. The equilibrium is tractable under the assumption that households prefer to live in their current house. The equilibrium can be understood intuitively by considering the price gradient, which is, loosely, the price difference between “neighboring” houses in the quality distribution. The price gradient expresses how much households that inhabit a particular part of the quality distribution in equilibrium are willing to pay for the quality difference over next best house. This depends on their marginal rate of substitution between house quality and other goods, which in general depends on their level of wealth. The price level at any quantile in the distribution is the sum over all price gradients below. The natural comparative static in our setup is order-preserving changes in income distribution, as these have an impact on prices without generating trading. The model yields a number of theoretical implications about the relation of income and house price distributions. (Thus it also yields results about the relation of the progressivity of income taxation and house price distribution). Any increase in income levels will increase both the level and dispersion of house prices. An increase in income inequality will decrease house prices except (possibly) in a segment adjacent to the top. House prices at the top can go either way in response to an increase in income inequality, depending on the details of both supply and demand sides of the market. As an illustration of the model, we obtained a theory-driven estimate for the impact of recent increases in income inequality on house prices in the US. The equilibrium conditions of the model allow us to estimate the housing quality distribution without imposing restrictions on the shapes of the distributions. Specifically, we asked how the 2007 price distribution would differ from the actual price distribution if income of every household would have grown at the actual mean rate since 1998. We found that the impact of increased inequality on prices has been modest but negative on average, and positive only at the top decile. This is because the cumulative impact of reductions in the price gradient at the bottom households, whose income growth did not keep up with the mean growth, dominates the positive effects almost all the way to the top of the distribution. Our model opens the possibility for other applications. Most directly, it is a natural framework for studying how various housing and income subsidy schemes impact housing prices. The intuition of the price gradient makes it clear why housing subsidies targeted for the poor will not merely be capitalized into prices of low-quality housing but will spill upwards in the quality ladder. A serious empirical analysis of this issue will require the inclusion of non-owner-occupied housing. Other important and challenging directions include migration (choice between cities) and preference heterogeneity. Both one-sided and two-sided matching, when assumed in “pure form” are abstractions and extreme ends of a spectrum of possible assumptions about the population of households in the local market. In a one-sided setup the local market is a closed economy, while in a two-sided setup all sellers are locals who move out of the economy, and all buyers are outsiders who move in. A model of a local housing market that would combines both type of trades—households who both buy and sell within the local market, and households that in and out for exogenous reasons (such as preference shocks), would of course be more realistic and more complicated. The counterfactuals presented in this paper took the form of order-preserving changes in the exogenous income distribution. This was crucial for being able to apply the formulae derived under the assumption of no-trade equilibrium. The lack of trading also meant that price changes do not have welfare effects–they are merely changes in paper wealth. In order to have welfare effects, price changes have to generate trading. One interesting and challenging topic for further study is the welfare effects of regulations, for instance transaction taxes, which can be expected to distort the matching of houses and households. A particularly policy-relevant issue is the impact of repealing rent control, which would result in a simultaneous supply and demand shock. Again, the impact on the entire distribution of housing prices is likely to be nontrivial. Our characterization of the (no-trade) equilibrium should be helpful even in applications that involve trading, although these will require more involved numerical methods