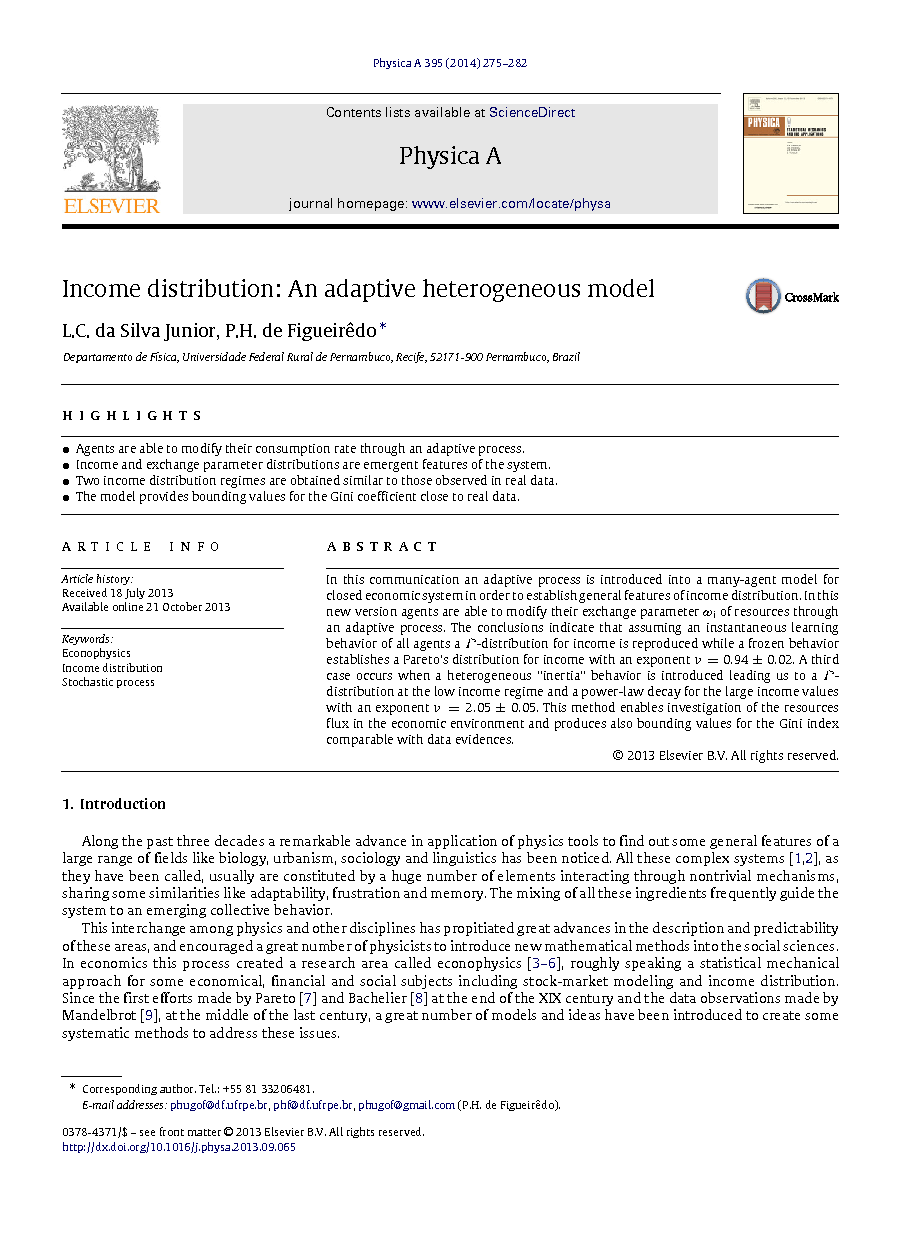 In this communication an adaptive process is introduced into a many-agent model for closed economic system in order to establish general features of income distribution. In this new version agents are able to modify their exchange parameter ωi of resources through an adaptive process. The conclusions indicate that assuming an instantaneous learning behavior of all agents a Γ-distribution for income is reproduced while a frozen behavior establishes a Pareto’s distribution for income with an exponent ν=0.94±0.02. A third case occurs when a heterogeneous “inertia” behavior is introduced leading us to a Γ-distribution at the low income regime and a power-law decay for the large income values with an exponent ν=2.05±0.05. This method enables investigation of the resources flux in the economic environment and produces also bounding values for the Gini index comparable with data evidences.

Along the past three decades a remarkable advance in application of physics tools to find out some general features of a large range of fields like biology, urbanism, sociology and linguistics has been noticed. All these complex systems [1] and [2], as they have been called, usually are constituted by a huge number of elements interacting through nontrivial mechanisms, sharing some similarities like adaptability, frustration and memory. The mixing of all these ingredients frequently guide the system to an emerging collective behavior. This interchange among physics and other disciplines has propitiated great advances in the description and predictability of these areas, and encouraged a great number of physicists to introduce new mathematical methods into the social sciences. In economics this process created a research area called econophysics [3], [4], [5] and [6], roughly speaking a statistical mechanical approach for some economical, financial and social subjects including stock-market modeling and income distribution. Since the first efforts made by Pareto [7] and Bachelier [8] at the end of the XIX century and the data observations made by Mandelbrot [9], at the middle of the last century, a great number of models and ideas have been introduced to create some systematic methods to address these issues. Actually, to achieve a comprehensive and reasonable panorama to describe the real dynamics involved in the income distribution process it is necessary to take into account a great number of complex and subjective parameters like preferences, believes, self-constraint behavior and, in some way, exogenous influences of the system over its economic agents [10]. Statistical evidences [11], [12], [13], [14], [15], [16], [17], [18], [19] and [20] point out that the income distribution of several countries exhibit a universal pattern with two phases. The first, at the low income regime, corresponds to the majority of society (around 95% of the total population), and is mathematically described by a log-normal or Gibbs distribution. The second, on the other hand, follows a power law distribution with an exponent ν (known as Pareto exponent) in the range 1⩽ν⩽3, corresponding to the large income regime (for 5% of the richest members of the population). For different time scales and income regimes, a large class of models can be found in the literature since those that incorporate spatial and topological aspects of the economic system [17] and [21] to those who use differential-equation approaches to describe the steady-state of the system [22]. Since the end of the 1980s, distinct researchers have introduced computational dynamics, based on a microscopic model to the exchange of wealth among economic agents in a closed system. This approach provides important and attractive information about the income distribution in close connection with statistical mechanical results. Usually the majority of these models treat the economic agent in two classes. In the biggest [13], [15], [23] and [24] blind agents make trades without perspective to save any part of its resources. Typically in this class the agents exchange randomly an amount Δm, leading the system to an exponential resource distribution, like a Boltzmann–Gibbs distribution for a gas. In the second class, agents have some degree of conservatism or predictability, which leads the entire system to a self-organizing behavior with two scenarios: in the first, called homogeneous models [25], [26], [27] and [28], all agents have the same propensity (λ) to save or the same exchange parameter (ω=1−λ) to consume their resources and the steady-state income distribution follows a Γ-distribution in this case, equation(1) View the MathML source Turn MathJax on where 〈m〉 is the average amount of resources and equation(2) View the MathML source Turn MathJax on represents the effective dimension of the system in a mechanical analogue. Surprisingly enough this kind of model reproduces the previous one in the particular case of ω=1. On the other hand, if each agent possesses a different exchange parameter [29], [30], [31], [32] and [33] (heterogeneous models), one gets a power law distribution equation(3) View the MathML source Turn MathJax on The fat tails enigma described by Pareto [7] at the end of the nineteenth century in real economies, seems to be reasonably solved by the introduction of a heterogeneous exchange parameter ωi. Despite the good results achieved by these models, an important question arises: is it possible to construct a model where the exchange parameter is an emerging characteristic of a self-organizing process of the system and simultaneously exhibit the main features observed in the previous models? To respond this question a new ingredient seems to be relevant to this class of model. The assumption that each agent could save some part of his resources following individual choices reminds us an important characteristic of complex systems, the heterogeneity. On the other hand, like any biological system the human being is an adaptive organism in a constant processes to optimize some parameters as a feedback effect of its interactive process with the environment. To clarify this point the present work investigates the role of an adaptive process of the economic agents in the income distribution. Besides the emerging collective behavior of the system, characterized by income distribution, it is also possible to investigate other questions like: how the individual consumption affects the income distribution, and how the flow of resources involved in trades is modified by changes in the consumption behavior? To investigate the role of a heterogeneous learning on the equilibrium distribution a new strategy is established. In the absence of credit and of a global information on the entire economic system, the sustainable economic logic, for each agent, is to change its own behavior, adjusting it with changes in amount of its actual resources. In this sense we shall assume a naive picture in which the propensity rate of a single agent can be modified. In the next two sections we present the model as well as its results, and comparisons with models previously exposed in the literature.

Using the simple assumption that agents can modify their consumption behavior we are able to reproduce as limiting cases the homogeneous and heterogeneous models for income distribution. Moreover, it indicates that it is not necessary to admit a homogeneous exchange parameter for the agents to obtain a Γ-distribution for income. Despite these results the heterogeneous learning process seems to reproduce some important features of realistic income distribution by showing a Γ-distribution behavior for the low income regime and a power law decay for the high income values, with an exponent ν=2.05±0.05 close to the observed in some real distributions. The model also provides a minimal value for the Gini index Gmin≅0.28 corresponding to an instantaneous learning behavior for all economic agents and a maximum value Gmax≅0.67 corresponding to the infinity inertia case. In this context adaptability seems to be a basic ingredient in the process of income distribution. The characterization of the income flow by the parameter Ω predicts a constant volume of transactions View the MathML source for the instantly adaptation economic world and a decreasing value bounded by 0 for an unadaptable economic environment case.