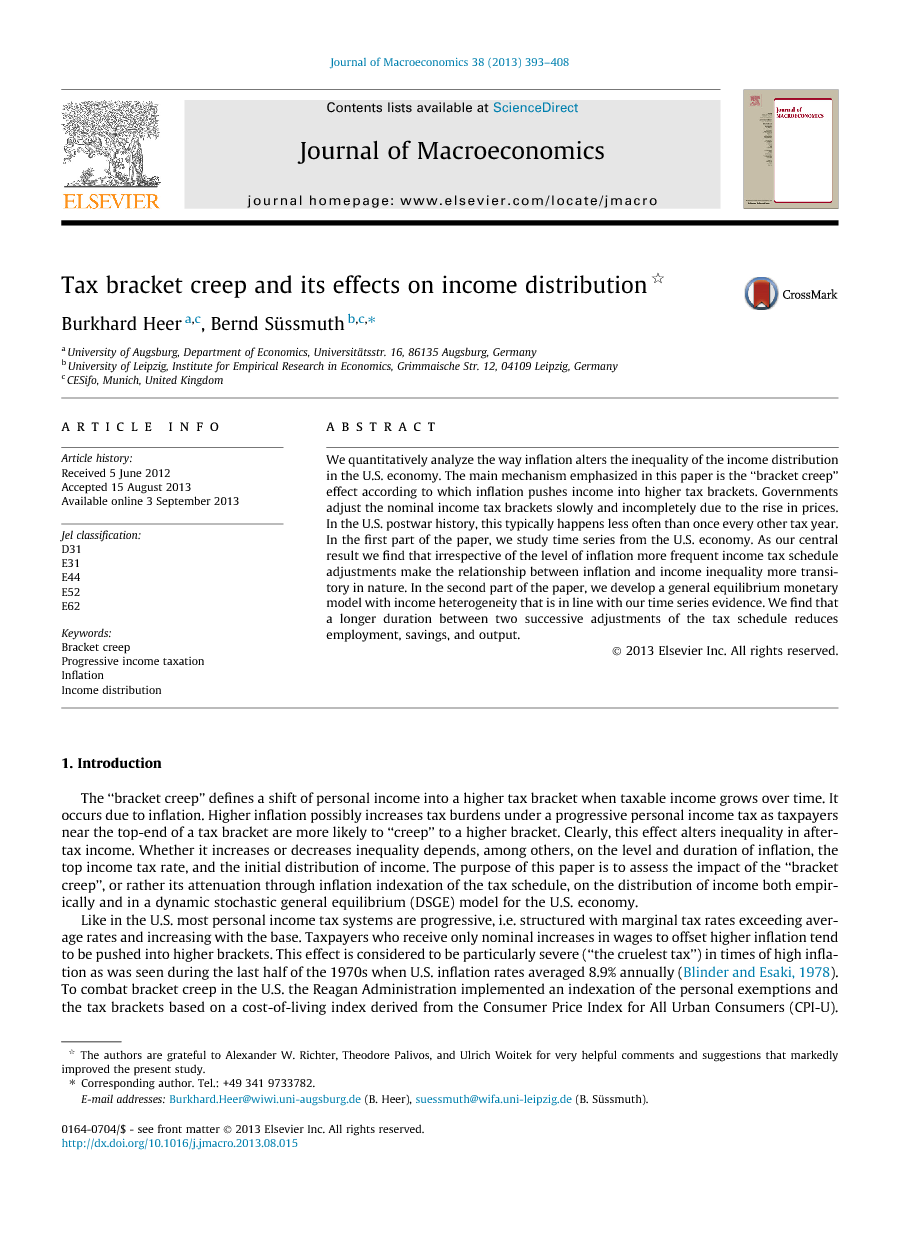 We quantitatively analyze the way inflation alters the inequality of the income distribution in the U.S. economy. The main mechanism emphasized in this paper is the “bracket creep” effect according to which inflation pushes income into higher tax brackets. Governments adjust the nominal income tax brackets slowly and incompletely due to the rise in prices. In the U.S. postwar history, this typically happens less often than once every other tax year. In the first part of the paper, we study time series from the U.S. economy. As our central result we find that irrespective of the level of inflation more frequent income tax schedule adjustments make the relationship between inflation and income inequality more transitory in nature. In the second part of the paper, we develop a general equilibrium monetary model with income heterogeneity that is in line with our time series evidence. We find that a longer duration between two successive adjustments of the tax schedule reduces employment, savings, and output.

“Bracket creep” has often been cited in the literature as one of the major distortionary effects of inflation. However, whether moderate levels of inflation also affect income-inequality through bracket creep has virtually not been analyzed since the 1970s. In a basic correlation analysis in the time domain we find for time series on income inequality and inflation in the U.S. that the relationship between the Gini coefficient dynamics and the inflation rate got more contemporaneous since the introduction of inflation indexation in 1985. Estimating bivariate spectral density measures additionally reveals that the average duration of association between the inflation rate and the Gini coefficient shrank from more than three years in the pre-1985 period to less than two years in the post-1984 period. Both our empirical and theoretical analysis suggest a progressive effect of inflation. In terms of size, it amounts to about one fifth to one third of the absolute value of the mean change in the Gini coefficient for one decade. The quantitative effects depend not only on the level of inflation but, in particular, also on the indexation system that is in place. In sum, we find that the duration of the bracket creep, i.e. the time period between two successive income tax schedule adjustments, is more important for equilibrium values of aggregate savings and average labor supply than the annual change in the tax rates due to bracket creep. A shorter duration of bracket creep results in higher equilibrium labor supply and output. In this sense, our results suggest the change in U.S. tax policy after 1985 and the inflation–indexation under ERTA to represent a successful change.