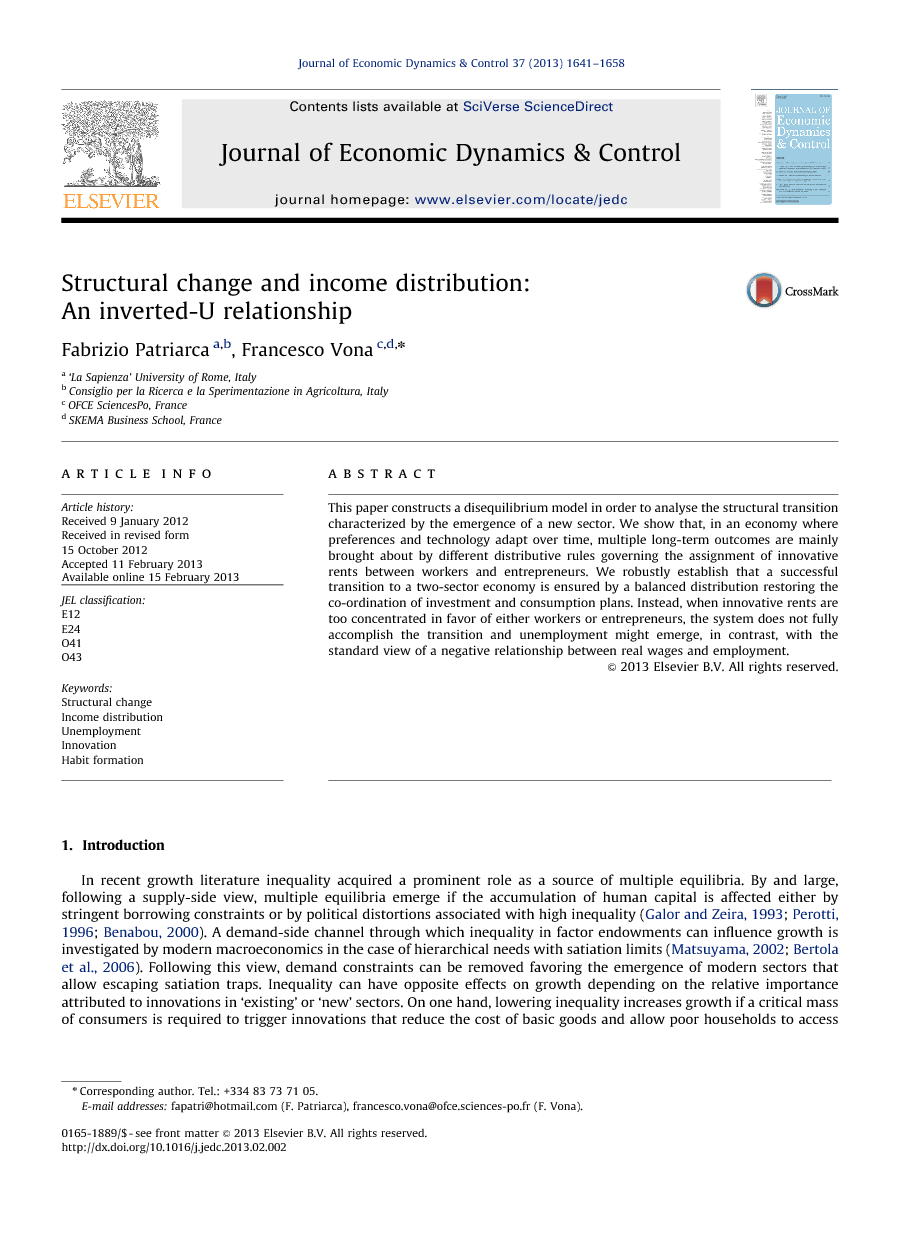 This paper constructs a disequilibrium model in order to analyse the structural transition characterized by the emergence of a new sector. We show that, in an economy where preferences and technology adapt over time, multiple long-term outcomes are mainly brought about by different distributive rules governing the assignment of innovative rents between workers and entrepreneurs. We robustly establish that a successful transition to a two-sector economy is ensured by a balanced distribution restoring the co-ordination of investment and consumption plans. Instead, when innovative rents are too concentrated in favor of either workers or entrepreneurs, the system does not fully accomplish the transition and unemployment might emerge, in contrast, with the standard view of a negative relationship between real wages and employment.

In recent growth literature inequality acquired a prominent role as a source of multiple equilibria. By and large, following a supply-side view, multiple equilibria emerge if the accumulation of human capital is affected either by stringent borrowing constraints or by political distortions associated with high inequality (Galor and Zeira, 1993, Perotti, 1996 and Benabou, 2000). A demand-side channel through which inequality in factor endowments can influence growth is investigated by modern macroeconomics in the case of hierarchical needs with satiation limits (Matsuyama, 2002 and Bertola et al., 2006). Following this view, demand constraints can be removed favoring the emergence of modern sectors that allow escaping satiation traps. Inequality can have opposite effects on growth depending on the relative importance attributed to innovations in ‘existing’ or ‘new’ sectors. On one hand, lowering inequality increases growth if a critical mass of consumers is required to trigger innovations that reduce the cost of basic goods and allow poor households to access goods with low priority (trickle-up). On the other hand, an increase in inequality benefits growth if pioneer consumers enable innovations in new sectors, making the consumption of new goods affordable to all (trickle-down). None of these approaches, however, addresses the issue of the relationship between structural change and inequality pointing to the role played by the dynamic interaction of supply and demand along the transition process. This rules out the possibility that the selection of which final equilibrium will prevail might depend on the characteristics of the transition process itself (Arthur, 1989). The assumption that workers mainly consume, while entrepreneurs mainly invest-, first stressed by the post-Keynesian growth literature (Kaldor, 1956, Kaldor, 1957, Goodwin, 1967 and Pasinetti, 1981),1 represents a good starting point to overcome the limits of standard analyses in so far as inequality changes directly translate into market disequilibria and hence can generate multiple final outcomes. From a methodological point of view, considering multiple outcomes as emerging from disequilibrium coordination problems (Howitt, 1994 and Amendola et al., 2001) implies rethinking the stark dichotomy between short- and long-run processes that mirror the one between demand and supply factors. In this perspective, adjustments to changes in fundamentals, such as preferences and technology “raise the same sort of coordination problems as do changes in aggregate demand” (Howitt, 1994, p. 765). However, to the best of our knowledge, disequilibrium coordination problems have not yet been analysed in a framework where preferences and technology adapt endogenously. Disequilibrium sequential models with boundedly rational agents (Amendola and Gaffard, 1998) represent a suitable tool to address this issue by focussing on the transition process brought about by a radical change, which poses ambiguity, knightian uncertainty and hence requires departures from perfect rationality (Phelps, 2007). Similarly to Gaffard and Saraceno (2008), we extend these models to study structural change in a two-sector economy. Our model, however, differs from theirs in three features: (1) we assume a functional distinction between income sources, (2) we endogenize the long-run evolution of preferences and technology to study the emergence of a new sector and (3) the breaking of the initial steady-state is accompanied by a change in the rule governing the assignment of innovative rents between workers and entrepreneurs. Assuming that phases of structural change are characterized by distributive changes is historically grounded (e.g. Polanyi, 1944) and particularly useful in capturing recent economic trends. Following the advent of ICT technologies, the gains of innovation accrued to a small fraction of the population, leaving the income of individuals under the 90th income percentile substantially unchanged and well below the long-run improvements of labor productivity (Wolff, 2006 and Lemieux, 2008). What we claim is that, by including these new features in a disequilibrium model, transitory changes in the distribution of the innovative rents crucially affect the long-run outcomes of structural change. In particular, we show that only a balanced distribution of innovative rents allows restoring the intertemporal coordination of demand and supply, hence exploiting the potential benefits of a transition characterized by radical uncertainty regarding the composition of consumers' demand and the technological potential of each sector. We robustly establish an inverse U-shaped relationship between distributive changes and the final outcome of the transition, in which both output maximization and full employment are reached at the level of moderate distributive changes. With a distribution of innovative rents too much in favor of workers, entrepreneurs' funds required to invest in new physical capital and innovation are not enough, hence the supply-side of the economy restrains growth and employment. In the opposite distributive case, the system ends up either in a steady-state characterized by Keynesian unemployment or in an unviable Harrodian path. Since the emergence of temporary rents is essential to disguise a wave of innovations, this result can be also interpreted with Schumpeterian lenses where the underlying distributive problem, i.e. access to innovation opportunities and appropriability of R&D investments (Baumol, 2002), is here restated in terms of conflict between workers and entrepreneurs. The paper is organized as follows. Section 2 provides the theoretical background to our assumptions on the evolution of preferences and technology, which represent the two main novelties of our model with respect to the standard out-of-equilibrium framework. Section 3 lays down the model and explicits the mechanisms governing the evolution of economic fundamentals. Section 4 is devoted to the discussion of the results and the robustness of the model. Section 5 concludes.