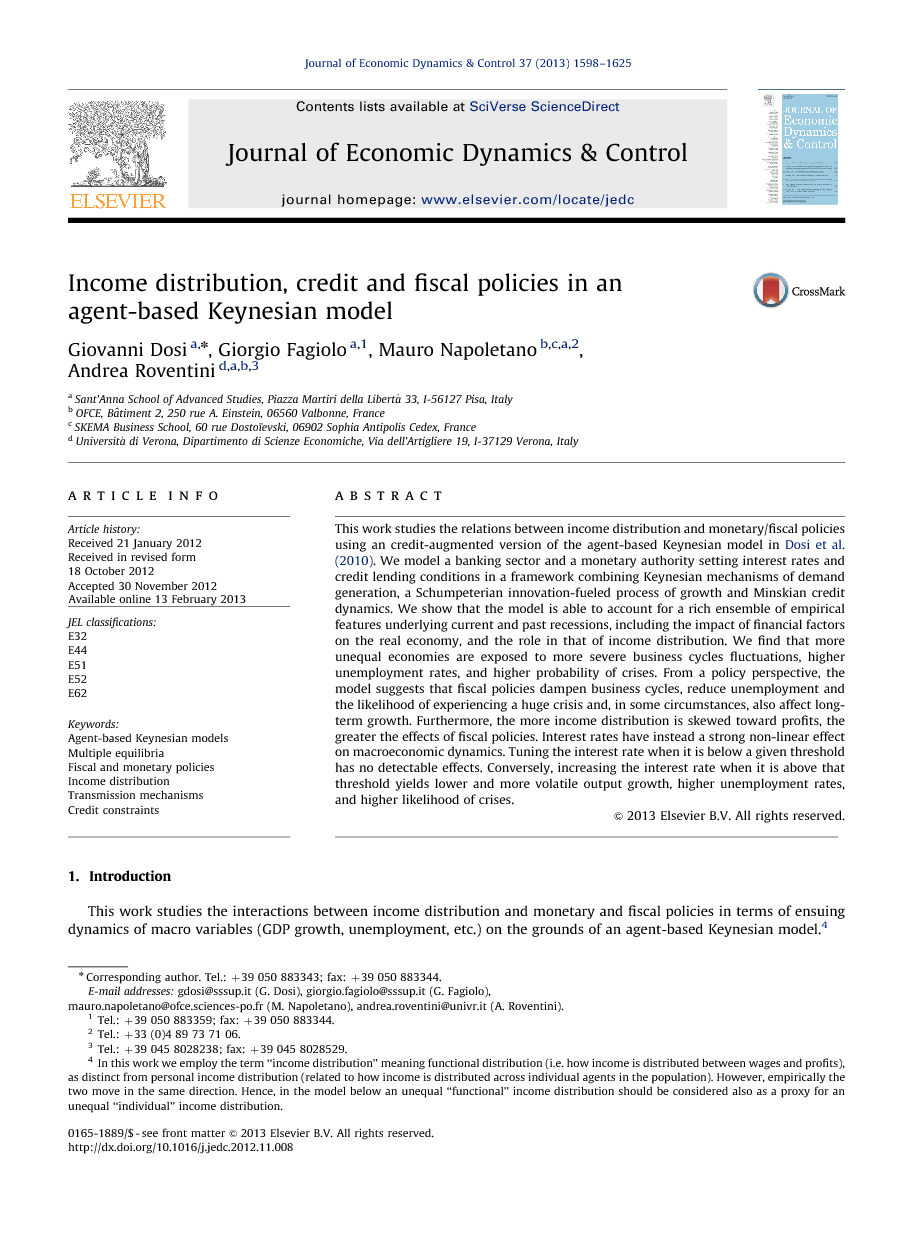 This work studies the relations between income distribution and monetary/fiscal policies using an credit-augmented version of the agent-based Keynesian model in Dosi et al. (2010). We model a banking sector and a monetary authority setting interest rates and credit lending conditions in a framework combining Keynesian mechanisms of demand generation, a Schumpeterian innovation-fueled process of growth and Minskian credit dynamics. We show that the model is able to account for a rich ensemble of empirical features underlying current and past recessions, including the impact of financial factors on the real economy, and the role in that of income distribution. We find that more unequal economies are exposed to more severe business cycles fluctuations, higher unemployment rates, and higher probability of crises. From a policy perspective, the model suggests that fiscal policies dampen business cycles, reduce unemployment and the likelihood of experiencing a huge crisis and, in some circumstances, also affect long-term growth. Furthermore, the more income distribution is skewed toward profits, the greater the effects of fiscal policies. Interest rates have instead a strong non-linear effect on macroeconomic dynamics. Tuning the interest rate when it is below a given threshold has no detectable effects. Conversely, increasing the interest rate when it is above that threshold yields lower and more volatile output growth, higher unemployment rates, and higher likelihood of crises.

In this paper we have explored the interactions between the financial and real sides of an evolutionary agent-based economy under different mixes of fiscal and monetary policies. After showing the ability of the model to reproduce the main stylized facts concerning credit dynamics at the micro and macro levels, we analyzed the effects of fiscal and monetary policies under different conditions characterizing the distribution of income between wages and profits. Our results emphasize the high interdependence between the effectiveness of macro policies and the patterns of income distribution. In the presence of a high profit margins, redistributive fiscal policies are able to dampen business cycle fluctuations and to keep the economy close to full employment. In line with the result shown in Dosi et al. (2010) we find that some fiscal policies are in any case necessary to keep the system away from a stagnant long-term trajectory, even in presence of abundant “Schumpeterian” opportunities of innovation. Also the effects of monetary policy are highly dependent on income distribution. In particular, monetary policy turns out to be effective only in regimes characterized by low profit-to-GDP ratios. In contrast, high profit shares lead to a form of liquidity trap, wherein firms prefer to keep funds idle instead of investing them into capacity expansion. In such a situation, the ability of monetary policy to stimulate the real sector through the credit channel is totally hampered. The results of our experiment strongly support the old-fashion Keynesian view of economic policies with their relative emphasis on fiscal ones both as countercyclical instruments and as necessary conditions to keep the economy on a “virtuous” high growth path. Needless to say, if there is some truth in our conclusions they run exactly counter the current European recipes: the recent fiscal austerity programs pursued by EMU countries, if we are right, are likely to worsen the state of the economy, further lowering the rate of growth, and increasing the instability of European economies. The model can be extended in several directions. First, we deliberately focused on a regime wherein average inflation is zero and the Central Bank interest rate is fixed throughout the experiments. This takes away the effects of further distributive changes induced by different inflation rates. In addition, it allows one to study more neatly the dynamic consequences on output and unemployment of persistent interest rate policies. However, one could easily extend the analysis to a framework in which average inflation can be positive and where the Central Bank adjusts interest rates and credit conditions in the light of some output and inflation targeting (the famous Taylor Rule being one of the possible strategies). This would involve also the introduction of a full-fledged analysis of labor markets (e.g. along the ways followed by Fagiolo et al., 2004 and Dawid et al., 2008). Second, one could extend the present framework introducing heterogeneous banks. This would allow one to study the macroeconomic effects of banking crises and the consequences on output and public finances of different bail-out schemes. Third, we have assumed a constant number of firms in the model. Although this assumption seems quite reasonable in light of the existing empirical evidence (see the remarks in footnote 8), one could extend the model allowing for a variable number of firms, whose entry depends endogenously on expectations about future market conditions. This extension would allow also to study the effects of monetary and fiscal policies on the entry rate of firms. Fourth, in this model we assumed that firms follow a mark-up pricing rule. An interesting extension of the paper would consist into testing the implications for aggregate output and price dynamics of alternative pricing rules, (e.g. of the kind discussed in Blinder, 1998). Finally, the consumption side of the model is highly stylized: workers fully consume their wage. One could easily extend the model allowing for households savings and indebtedness. The latter played an important role in the recent crisis. Indeed, we conjecture, that these modifications are likely to strengthen the main conclusions on the impact of monetary and credit policies discussed in this work.