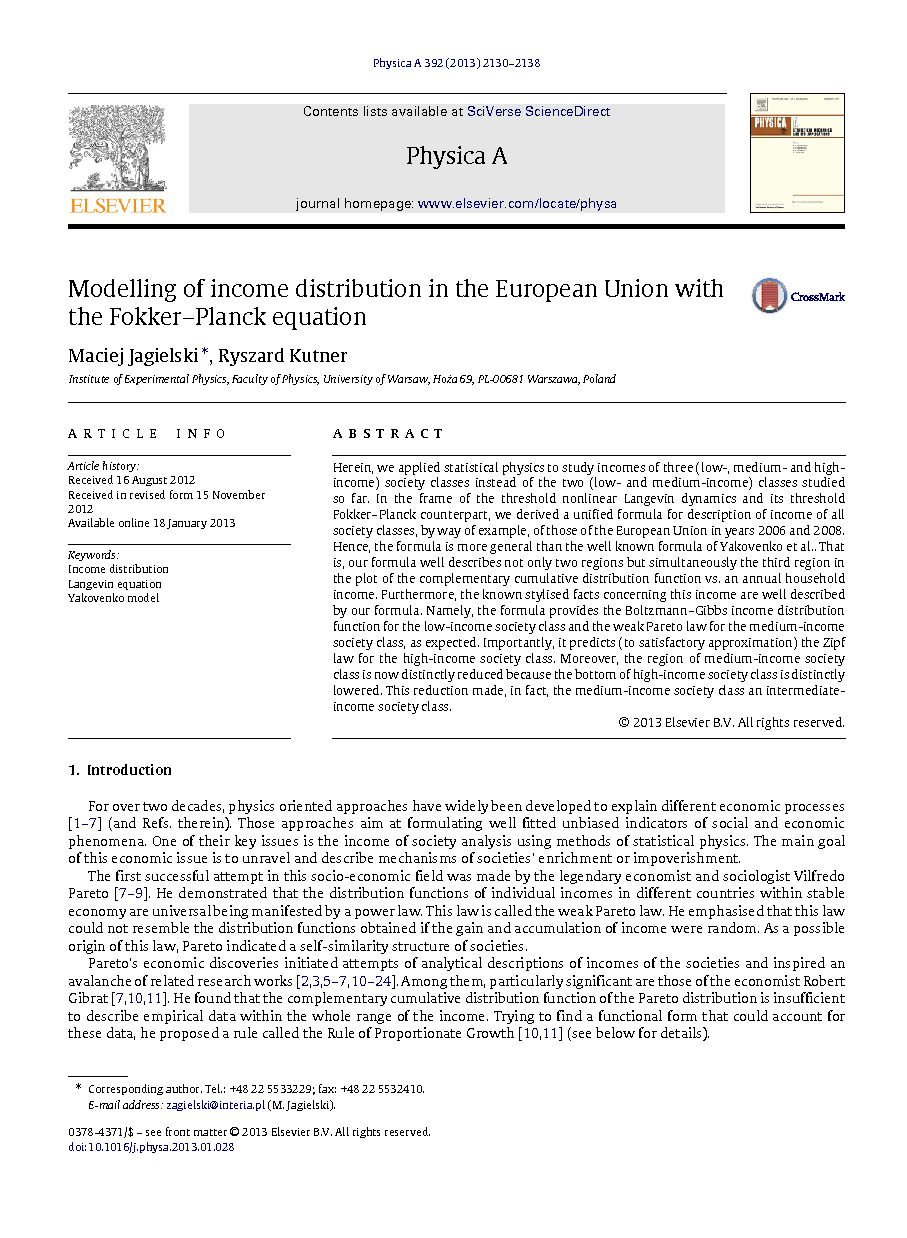 For over two decades, physics oriented approaches have widely been developed to explain different economic processes [1], [2], [3], [4], [5], [6] and [7] (and Refs. therein). Those approaches aim at formulating well fitted unbiased indicators of social and economic phenomena. One of their key issues is the income of society analysis using methods of statistical physics. The main goal of this economic issue is to unravel and describe mechanisms of societies’ enrichment or impoverishment. The first successful attempt in this socio-economic field was made by the legendary economist and sociologist Vilfredo Pareto [7], [8] and [9]. He demonstrated that the distribution functions of individual incomes in different countries within stable economy are universal being manifested by a power law. This law is called the weak Pareto law. He emphasised that this law could not resemble the distribution functions obtained if the gain and accumulation of income were random. As a possible origin of this law, Pareto indicated a self-similarity structure of societies. Pareto’s economic discoveries initiated attempts of analytical descriptions of incomes of the societies and inspired an avalanche of related research works [2], [3], [5], [6], [7], [10], [11], [12], [13], [14], [15], [16], [17], [18], [19], [20], [21], [22], [23] and [24]. Among them, particularly significant are those of the economist Robert Gibrat [7], [10] and [11]. He found that the complementary cumulative distribution function of the Pareto distribution is insufficient to describe empirical data within the whole range of the income. Trying to find a functional form that could account for these data, he proposed a rule called the Rule of Proportionate Growth [10] and [11] (see below for details). Furthermore, the income of societies was analysed by David Champernowne, who constructed a stochastic model simulating the Pareto power law [12] and also by Benoit Mandelbrot who described several useful properties of random variables subject to the Pareto distribution [8] and [9]. In the recent decade, a large number of studies were performed aiming at construction of models, which (to some extent) would well replicate the observed complementary cumulative distribution functions of individual incomes. Among them, the most significant seems to be the Clementi–Matteo–Gallegati–Kaniadakis approach [17], the Generalised Lotka–Volterra Model [5], [6] and [7], the Boltzmann–Gibbs law [13], [14], [15] and [16], and the Yakovenko et al. model [2] and [3]. Very recently, a mathematical model similar to that of Yakovenko et al. has been developed [21]. It involves complex economic justification for microscopic stochastic dynamics of wealth. However, none of the above attempts to find an analytical description of the income structure solves the principal challenges, which concern: (i) the description of the annual household incomes of all society classes (i.e. the low-, medium-, and high-income society classes) by a single unified formula and (ii) the problem regarding corresponding complete microscopic (microeconomic) mechanism responsible for the income structure and dynamics. In our considerations presented herein, we used Boltzmann–Gibbs law and Yakovenko et al. model to derive a uniform analytical formula describing income of all three society classes.

Herein, we proved that the household incomes of all society classes in the EU can be modelled by the nonlinear threshold Langevin dynamics (1) with m-dependent drift term, A(m), and m-dependent dispersion, B(m), given by Eqs. and , respectively. At the threshold m1, there is a jump of the proportionality coefficient of the drift term. That is, this term abruptly changes from a to a′, where a′<a (as α1<α). It means that the stochastic term in Eq. (1) is relatively more significant in this case (i.e. the above threshold m1) than the drift term. That is, economic activity of the high-income society class is much more risky than activities of all other society classes, as expected. By comparing results obtained for years 2006 and 2008 (cf. Fig. 4 and Fig. 5), we found that the threshold m1 was only slightly higher for the latter year than for the former. It means that in year 2006, to the high-income society class belonged the society members almost as rich as those belonging to this class in year 2008. Moreover, the result of only slightly more extensive society stratification in year 2008 was confirmed by exponents’ inequality, as the exponent α1 for year 2006 is only slightly higher than that for year 2008. Furthermore, the slowly-varying tendency (similar to that considered above) is also observed for the medium-income society class. In fact, it is surprising how stable with respect to the recent financial crisis the shape of the curve Π(m) vs. m is. That is, only the number of households belonging to a given income society class most likely changed but the income structure of the society as a whole was not altered. The completed database, which we used (by properly joining the Forbes empirical database with that of EU-SILC), emphasises a significant role of the high-income society class. Namely, the presence of the third region increases this Pareto exponent which characterises the medium-income society class making the range of this class narrower and shifting it to incomes lower by one order of magnitude (cf. Fig. 2). This latter society class is now so much reduced that it occupies almost an intermediate region between low- and high-income society classes. Apparently, the role of the low- and medium-income society classes was, in the present case, significantly reduced. The use of two different datasets (EU-SILC and Forbes), which are not necessarily compatible, carries a methodological danger of getting discontinuous fits. Nevertheless, bringing these two datasets together and analysing them jointly is better for making progress in this field than avoiding their comparison. Herein, we succeeded in comparing ratios (i.e. relative population of successive income society classes) of View the MathML source and View the MathML source for both year 2006 and 2008 by using our formula, Eq. (19). Hence, we determined r1=32.66 and r2=16.48 for year 2006 as well as r1=48.98 and r2=13.97 for year 2008. We obtained information on, relatively, how many society members belong to a given income society class. Apparently, population of the medium-income society class is strongly decreased in year 2008 in comparison to that in year 2006. Several members of this class were shifted both to the low- and to high-income society classes. Our low-parameter approach seems to be much more sensitive than that using the Gini coefficient (G) [39] because we obtained G=54.34 and G=54.89 for year 2006 and 2008, respectively. Furthermore, we estimated the percentage breakdown of population of the society classes: for year 2006—low-income: 96.85%; medium-income: 2.97%; high-income: 0.18% and for year 2008—low-income: 97.86%; medium-income: 2.00%; high-income: 0.14%. These results can be considered as complementary to that (obtained above) corresponding to the relative population of successive income society classes. Interestingly, the total fraction of the medium- and high-income classes in the EU was around 3% in year 2006, which is about the same as that found by Yakovenko et al. [3] for the US, and this fraction has decreased to around 2% in year 2008, most likely due to the financial crisis. Economists often argue that economic and political conditions are quite different in the US and in the EU, and expect a lower income inequality in the EU. However, we demonstrate quantitatively herein that the exponential law does apply to the EU as well. This finding gives much stronger support for universal applicability of the Boltzmann–Gibbs law in economics. Our work shows that the income distribution in the low-income class, covering around 97% of population, follows the exponential law, whereas in the two upper-income classes the distribution follows two power laws with different exponents. Remarkably, the role of the medium-income society class is strongly reduced making it an intermediate one within our approach to the complementary cumulative distribution function. We hope that our results will be useful for studies of static and dynamic properties of the household incomes not only for the EU as a whole but also for those of other continents and countries, if only sufficiently honest, large, and complete (i.e. covering all society classes) empirical data are available.