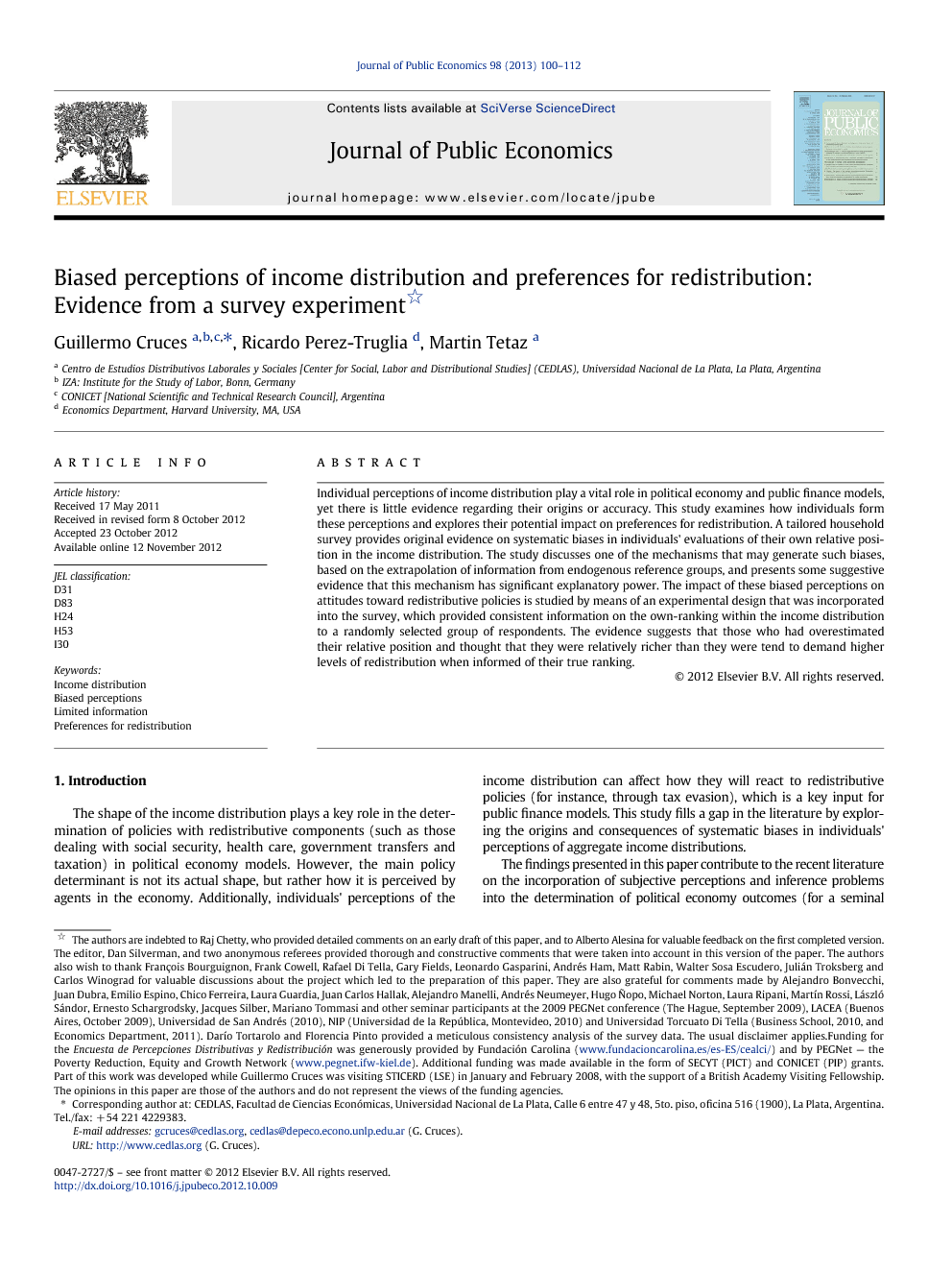 Individual perceptions of income distribution play a vital role in political economy and public finance models, yet there is little evidence regarding their origins or accuracy. This study examines how individuals form these perceptions and explores their potential impact on preferences for redistribution. A tailored household survey provides original evidence on systematic biases in individuals' evaluations of their own relative position in the income distribution. The study discusses one of the mechanisms that may generate such biases, based on the extrapolation of information from endogenous reference groups, and presents some suggestive evidence that this mechanism has significant explanatory power. The impact of these biased perceptions on attitudes toward redistributive policies is studied by means of an experimental design that was incorporated into the survey, which provided consistent information on the own-ranking within the income distribution to a randomly selected group of respondents. The evidence suggests that those who had overestimated their relative position and thought that they were relatively richer than they were tend to demand higher levels of redistribution when informed of their true ranking.

The motivation for undertaking this study was the apparent lack of evidence regarding the accuracy and origins of perceptions of the income distribution, which play a crucial (though implicit) role in political economy and public finance models. The study focuses on a simple mechanism, whereby agents extrapolate from their reference group without accounting for the selection process underlying the formation of the group owing to either informational or cognitive limitations. A tailored household survey provided evidence of the presence of sizeable systematic biases in perceptions about relative income in Argentina. Furthermore, the analysis uncovered suggestive evidence that the incorrect extrapolation of information from reference groups can be a powerful explanation for the observed biases. The systematic biases documented in this paper and their consequences can arise in any society. This study involved the implementation of an original survey experiment in the field in which a randomly assigned group of respondents was provided with accurate information about their ranking in the income distribution as a form of feedback concerning their responses. Confronting agents who had biased perceptions with this information had a significant effect on their stated preferences for redistribution: those who overestimated their relative position (who thought that they were relatively richer than they were) demanded more redistribution. To the degree that the information treatment managed to correct biased distributional perceptions, these results can be interpreted as evidence of the causal effect of misperceptions on political attitudes. This mechanism provides an alternative explanation for the low levels of redistribution observed in modern democracies.26 Having accurate information about the income distribution might induce agents to better calibrate their demands for redistribution. The results in this paper support Romer's (2003) discussion of the possible welfare-improving effects of subsidizing information and Besley's (2007) remarks about the potential of information for improving policies, although the impact of the biases in the efficiency of redistribution should also be considered (Acemoglu and Robinson, 2001). The role of misconceptions in political economy has been studied before (Romer, 2003 and Slemrod, 2006). While Besley (2007) highlights the benefits to be derived from incorporating notions of dispersed and limited information for modern political economy, building-in more specific factors, such as biased perceptions of the distribution, can further enrich political economy models and empirical applications. It can also provide explanations for other puzzles in the literature, such as those pointed out by Bartels' (2008) results on the reduced responsiveness of representatives to low-income voters. More generally, concepts such as inequality, self-interest and the median voter can be adapted in their application to political economy outcomes when misperceptions and misconceptions play a role. The findings in this paper indicate how perceptions may affect stated preferences for redistribution. Further research could focus on the impact of biases and information on actual behavior, such as voting patterns. Moreover, it would be interesting to explore how misperceptions affect individuals' reactions to redistributive policies (e.g., as expressed through charitable contributions and tax evasion) and to learn whether the provision of information on broader issues that go beyond such matters as rules and regulations (e.g., Chetty and Saez, 2009) may have implications for public finance models. Finally, the results of the analyses conducted in connection with this study could be attributable either to limited information or to limited cognitive ability — further research will be needed in order to pinpoint the source of the observed biases in distributional perceptions.