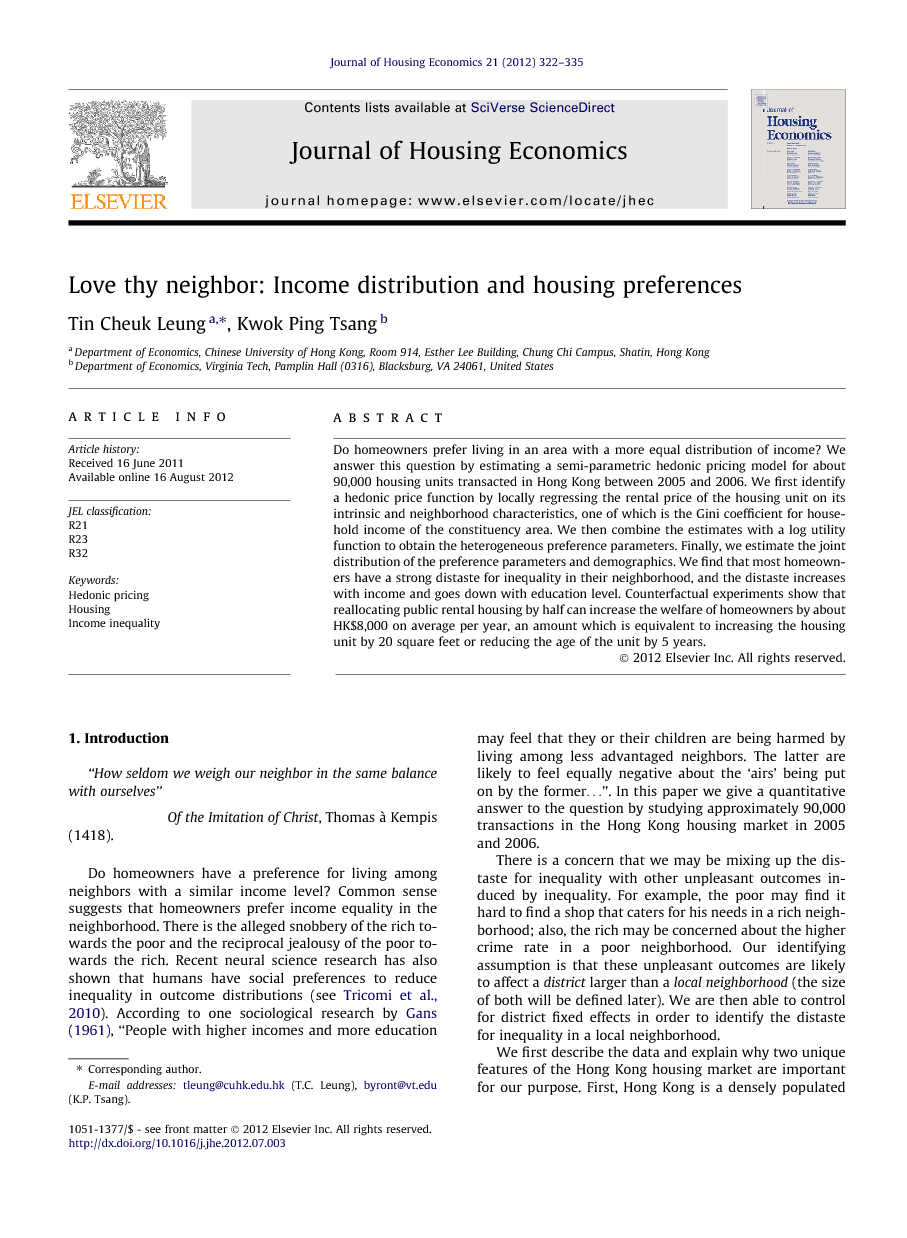 Do homeowners prefer living in an area with a more equal distribution of income? We answer this question by estimating a semi-parametric hedonic pricing model for about 90,000 housing units transacted in Hong Kong between 2005 and 2006. We first identify a hedonic price function by locally regressing the rental price of the housing unit on its intrinsic and neighborhood characteristics, one of which is the Gini coefficient for household income of the constituency area. We then combine the estimates with a log utility function to obtain the heterogeneous preference parameters. Finally, we estimate the joint distribution of the preference parameters and demographics. We find that most homeowners have a strong distaste for inequality in their neighborhood, and the distaste increases with income and goes down with education level. Counterfactual experiments show that reallocating public rental housing by half can increase the welfare of homeowners by about HK$8,000 on average per year, an amount which is equivalent to increasing the housing unit by 20 square feet or reducing the age of the unit by 5 years.

Do homeowners have a preference for living among neighbors with a similar income level? Common sense suggests that homeowners prefer income equality in the neighborhood. There is the alleged snobbery of the rich towards the poor and the reciprocal jealousy of the poor towards the rich. Recent neural science research has also shown that humans have social preferences to reduce inequality in outcome distributions (see Tricomi et al., 2010). According to one sociological research by Gans (1961), “People with higher incomes and more education may feel that they or their children are being harmed by living among less advantaged neighbors. The latter are likely to feel equally negative about the ‘airs’ being put on by the former…”. In this paper we give a quantitative answer to the question by studying approximately 90,000 transactions in the Hong Kong housing market in 2005 and 2006. There is a concern that we may be mixing up the distaste for inequality with other unpleasant outcomes induced by inequality. For example, the poor may find it hard to find a shop that caters for his needs in a rich neighborhood; also, the rich may be concerned about the higher crime rate in a poor neighborhood. Our identifying assumption is that these unpleasant outcomes are likely to affect a district larger than a local neighborhood (the size of both will be defined later). We are then able to control for district fixed effects in order to identify the distaste for inequality in a local neighborhood. We first describe the data and explain why two unique features of the Hong Kong housing market are important for our purpose. First, Hong Kong is a densely populated area that magnifies the impact of neighbors (e.g., frequent face-to-face interactions in the elevator). Second, the public housing policy in Hong Kong has created substantial income inequality within local neighborhoods. Using a 3-step semi-parametric hedonic pricing technique, we obtain the willingness to pay and preference parameters for the characteristics of the housing unit and also the neighborhood characteristics. In particular, we look at the preference for income inequality and see how the preference changes with the demographics. Finally, we conduct a counterfactual experiment by reallocating half of the poorest public housing residents in all constituency areas in Hong Kong, and look at the welfare implications. To address the concern that the neighborhood income inequality may be correlated with some omitted variable that are correlated with house price, we take advantage of an exogenous policy change. On May 15, 2004, the Hong Kong SAR government made an unexpected announcement to turn a hitherto idle apartment complex into public rental housing. The expectation of an influx of relatively poor neighbors caused a drop in the housing transaction prices in that neighborhood. We compare the housing prices in this neighborhood and several control groups and find that the effect of income inequality induced by this policy change is in line with the estimates in our semi-parametric hedonic regression. Our paper is related to the large literature of the neighborhood effects on house price, and our paper contributes to the literature by identifying a new neighborhood effect, i.e., income inequality in the local neighborhood. Empirical studies on the neighborhood effect can be roughly divided into several categories. First, Boyle and Kiel (2001) review the evidence on the impact of environmental goods, such as air quality, on consumers’ willingness to pay for housing. A recent paper by Rossi-Hansberg et al. (2010) looks at the concentrated residential urban revitalization programs in Richmond, VA. A few disadvantaged neighborhoods (the impact area) are supported by the federal government to renovate, but the neighborhood of the impact area also benefits from the program due to the neighborhood effects. The authors find that there is an increase in the land value of the neighborhood, and the effect decreases with the distance from the impact area. Using the American Housing Survey for 1985 and 1989, Ioannides (2002) finds that whether the neighbors (the 10 nearest housing units) of an individual have house maintenance substantially affects the individual’s maintenance decision. That is, living in a dilapidated neighborhood discourages an individual to improve her housing unit, while the individual has a higher incentive to renovate when the neighbors’ housing units look much better. There are studies on the impact of school quality on house price. For example, Bayer et al. (2007) find that households are willing to pay less than 1% more in house price when the average performance of the local schools is higher by 5%. Social status of the neighbors also matters. Ioannides and Zabel (2003) find a large elasticity of housing demand with respect to neighbors’ permanent income. Our paper is closest to a recent study by Ioannides et al. (2008). The authors find that homeowners prefer to live with neighbors with similar characteristics. Finally, Kiel et al. (2008) show that different levels of neighborhood effects, from a large area to the very local neighborhood, all have an impact on house price. We contribute to the literature by identifying one particular local characteristic (income inequality) of the neighborhood. The large variations of income distribution within each district in Hong Kong allow us to identify such effect, and our results may have useful implications on public housing policy.

People dislike living near others who have a lower or higher income level, and the distaste is substantial: on average, a homeowner is willing to pay about HK$3,200 for a 10% drop of the local Gini coefficient, and it is the same as the amount a home buyer is willing to pay for a 1.25% increase in the size of the housing unit. We also find that the distaste for income inequality varies with demographics: it goes up with income and goes down with age. To avoid the potential endogeneity problem, we make use of a policy change in 2004 and conduct a natural experiment using a small part of the sample, and the results are similar. To gauge the relevance of our results, we show through a counterfactual experiment that reallocating part of the public rental housing improves homeowners’ welfare by an economically significant amount. Of course, the experiment ignores the potential problems of grouping all low-income individuals in one area. Our results are local, and we also ignore how income distribution is endogenously formed in each constituency area. The main purpose of this paper is to identify the preference for local income inequality among homeowners, though our results point to further questions: Why do homeowners dislike income inequality, even after controlling for the presence of public housing and district fixed effects? Should public housing policymaking take into account such a preference? How does this preference effect local income distribution over time? We leave these questions for future research.