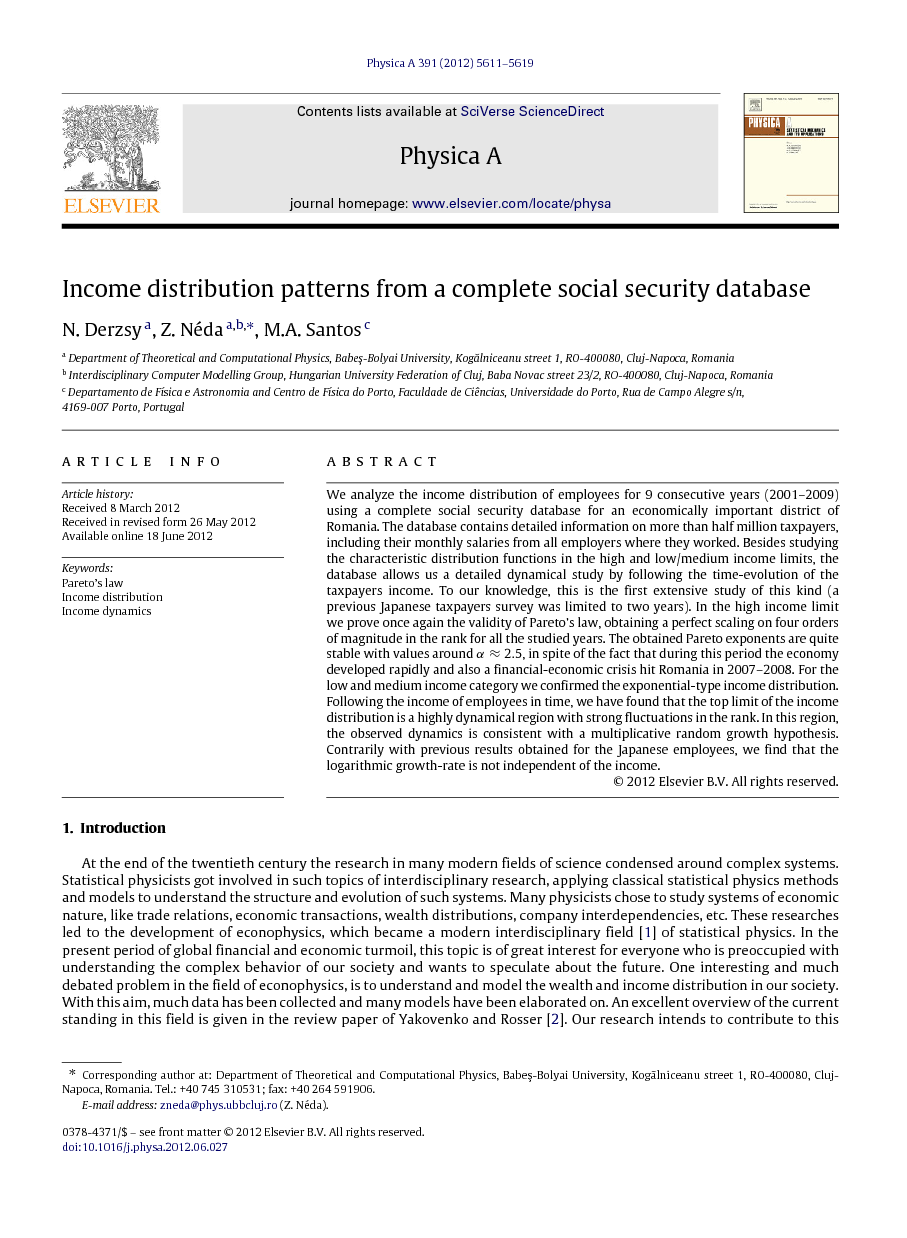 We analyze the income distribution of employees for 9 consecutive years (2001–2009) using a complete social security database for an economically important district of Romania. The database contains detailed information on more than half million taxpayers, including their monthly salaries from all employers where they worked. Besides studying the characteristic distribution functions in the high and low/medium income limits, the database allows us a detailed dynamical study by following the time-evolution of the taxpayers income. To our knowledge, this is the first extensive study of this kind (a previous Japanese taxpayers survey was limited to two years). In the high income limit we prove once again the validity of Pareto’s law, obtaining a perfect scaling on four orders of magnitude in the rank for all the studied years. The obtained Pareto exponents are quite stable with values around α≈2.5, in spite of the fact that during this period the economy developed rapidly and also a financial-economic crisis hit Romania in 2007–2008. For the low and medium income category we confirmed the exponential-type income distribution. Following the income of employees in time, we have found that the top limit of the income distribution is a highly dynamical region with strong fluctuations in the rank. In this region, the observed dynamics is consistent with a multiplicative random growth hypothesis. Contrarily with previous results obtained for the Japanese employees, we find that the logarithmic growth-rate is not independent of the income.

In the present paper we investigated experimentally the workers’ income distribution and its dynamics, using extended social security data for the Cluj district, Romania, for years 2001–2009. The difference between this study and previous real data income distribution studies performed in various countries of the World is that our database allows a complete sampling in which each employee can be uniquely identified and his/her income can be followed in time. In such manner, besides the characteristic distributions in the low and high income limits, extended information about the income dynamics can be also analyzed. To our knowledge, this is the first long time study of income mobility. An interesting aspect of our data is that it contains also information on two years (2007–2008) when a financial-economic crisis hit Romania. In this way, it is possible to identify the main effects of such a crisis on the income distribution functions and income dynamics. We have confirmed once again the validity of Pareto’s principle for the upper 2% income limit of the targeted society, obtaining an excellent scaling for four orders of magnitude in the rank, and a quite stable Pareto exponent α with less than 10% yearly fluctuation in the neighborhood of α=2.5. It worth mentioning that for several years we have found that Pareto’s law is valid for the upper 5% of society as illustrated in Fig. 4. The total income of each employee in the database, for the whole 9 years interval, also exhibits the Pareto scaling with a similar exponent, α=2.69. Although the proportionality constant for the power-law fitting varies in a considerable manner for the studied time-interval (suggesting large fluctuations in the average and maximal salaries) the Pareto exponent is unexpectedly stable. In the low and medium income limit, we have confirmed the exponential-like shape of the income distribution function. The income temperatures Tr, determined from the exponential fits, show a monotonic increase, except for 2008, where drastic austerity measures were implemented as a result of the crisis, and the salaries of all state employees were reduced by 25%. The dynamical studies on the income of individuals in the high income limit revealed that the stability of the Pareto exponent over the 9 years is not a result of a stable rank kept by the employees in the income top list, nor the consequence of the stability of the rank of top jobs. The Pareto limit is a highly dynamical region where both the players and the jobs are constantly changing. The stability of the Pareto law and exponent should have thus a statistical explanation, in which fluctuations are the main ingredient. Following the dynamics of the income by plotting the changes in individual salary as a function of the previous salary, we have confirmed a basic hypothesis used in current income models: a multiplicative random growth of income is a reasonable assumption for the richest sector of the population. In such a manner we gave experimental evidence for the assumptions of the models used in Refs. [32] and [31]. Our results do not confirm the fact that the growth-rate is independent of the income, as previously found for Japan [33] and [34]. It should be noted, however, that in our case the income was exclusively salary, whereas in the Japanese study (based on income tax) income was dominated by profits from capital investments. Whether the income independence of growth rates is a direct consequence of the presence of these risky assets, or if major differences between the Romanian and Japanese economies are responsible for the two distinct behaviors, remains an open problem.