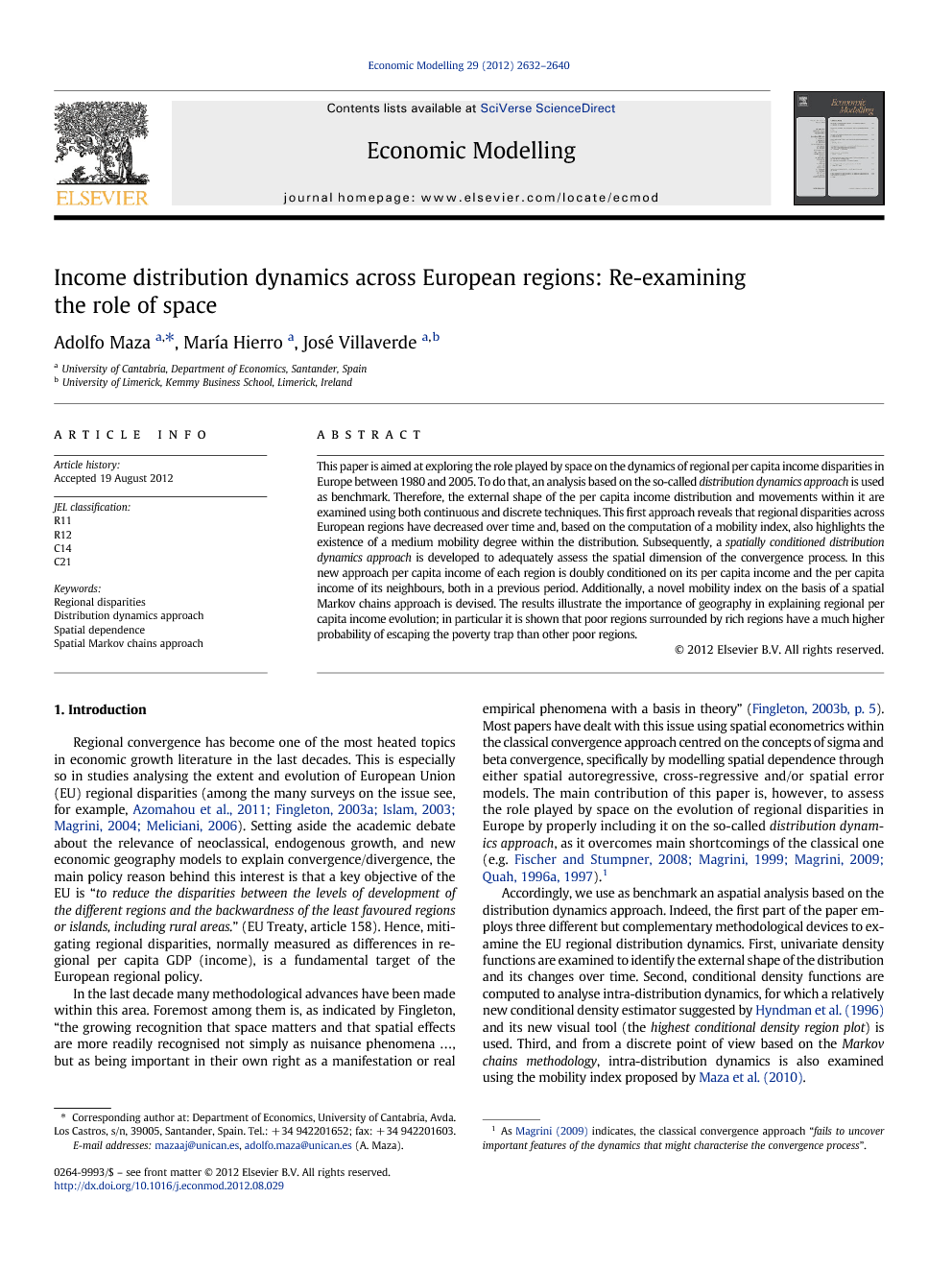 This paper is aimed at exploring the role played by space on the dynamics of regional per capita income disparities in Europe between 1980 and 2005. To do that, an analysis based on the so-called distribution dynamics approach is used as benchmark. Therefore, the external shape of the per capita income distribution and movements within it are examined using both continuous and discrete techniques. This first approach reveals that regional disparities across European regions have decreased over time and, based on the computation of a mobility index, also highlights the existence of a medium mobility degree within the distribution. Subsequently, a spatially conditioned distribution dynamics approach is developed to adequately assess the spatial dimension of the convergence process. In this new approach per capita income of each region is doubly conditioned on its per capita income and the per capita income of its neighbours, both in a previous period. Additionally, a novel mobility index on the basis of a spatial Markov chains approach is devised. The results illustrate the importance of geography in explaining regional per capita income evolution; in particular it is shown that poor regions surrounded by rich regions have a much higher probability of escaping the poverty trap than other poor regions.

Regional convergence has become one of the most heated topics in economic growth literature in the last decades. This is especially so in studies analysing the extent and evolution of European Union (EU) regional disparities (among the many surveys on the issue see, for example, Azomahou et al., 2011, Fingleton, 2003a, Islam, 2003, Magrini, 2004 and Meliciani, 2006). Setting aside the academic debate about the relevance of neoclassical, endogenous growth, and new economic geography models to explain convergence/divergence, the main policy reason behind this interest is that a key objective of the EU is “to reduce the disparities between the levels of development of the different regions and the backwardness of the least favoured regions or islands, including rural areas.” (EU Treaty, article 158). Hence, mitigating regional disparities, normally measured as differences in regional per capita GDP (income), is a fundamental target of the European regional policy. In the last decade many methodological advances have been made within this area. Foremost among them is, as indicated by Fingleton, “the growing recognition that space matters and that spatial effects are more readily recognised not simply as nuisance phenomena …, but as being important in their own right as a manifestation or real empirical phenomena with a basis in theory” (Fingleton, 2003b, p. 5). Most papers have dealt with this issue using spatial econometrics within the classical convergence approach centred on the concepts of sigma and beta convergence, specifically by modelling spatial dependence through either spatial autoregressive, cross-regressive and/or spatial error models. The main contribution of this paper is, however, to assess the role played by space on the evolution of regional disparities in Europe by properly including it on the so-called distribution dynamics approach, as it overcomes main shortcomings of the classical one (e.g. Fischer and Stumpner, 2008, Magrini, 1999, Magrini, 2009, Quah, 1996a and Quah, 1997).1 Accordingly, we use as benchmark an aspatial analysis based on the distribution dynamics approach. Indeed, the first part of the paper employs three different but complementary methodological devices to examine the EU regional distribution dynamics. First, univariate density functions are examined to identify the external shape of the distribution and its changes over time. Second, conditional density functions are computed to analyse intra-distribution dynamics, for which a relatively new conditional density estimator suggested by Hyndman et al. (1996) and its new visual tool (the highest conditional density region plot) is used. Third, and from a discrete point of view based on the Markov chains methodology, intra-distribution dynamics is also examined using the mobility index proposed by Maza et al. (2010). After that, the second and main part of the paper aims at examining the role played by space on the dynamics of regional income disparities in Europe. To do that, a spatially conditioned distribution dynamics approach is proposed. Concerning the external shape of the distribution, this is done by computing univariate density functions for neighbour-relative per capita income variables. Next, to address the issue of intra-distribution dynamics Hyndmann et al.'s estimator is applied to new conditioned variables: to be precise, per capita income of each region is doubly conditioned on its per capita income and that of its neighbours, both in a previous period. Finally, a spatial Markov chains methodology is employed ( Le Gallo, 2004, Le Gallo and Chasco, 2008, Monasterio, 2010 and Rey, 2001), in which a novel, properly modified version of the aforementioned mobility index is used to quantify the role played by space. In all these three settings the new results are compared to the aspatial ones used as benchmark. This paper departs from an earlier analysis on the role of space on distribution dynamics in two respects: First, in the non-parametric estimation of a doubly conditioned density function in the continuous intra-distribution dynamics analysis by using Hyndmann et al.'s estimator2; and, second, in the definition and computation of a new spatial mobility index in the discrete intra-distribution dynamics analysis that allows us to quantify the role of space. The statistical information used in this paper has been obtained from the Cambridge Econometric Database. Specifically, we examine disparities among 192 EU-15 regions (see the Appendix), most of which correspond to level 2 of the Nomenclature of Territorial Units for Statistics (NUTS), from 1980 to 2005. For brevity's sake, the only variable we employ is per capita income (adjusted for purchasing power parity differences), although the analysis could be directly applied to other relevant variables. We consider relative values, i.e., regional per capita incomes normalised by the European average (EU-15 = 100), as a simple and efficient way to correct for the effects of business cycle and trends in the European average income. The paper is structured as follows: the next section applies the distribution dynamics approach to an aspatial set up. The third section extends the same approach to a spatial setup in order to highlight the role played by space. The final section provides some concluding remarks.

This paper evaluated the role of space in the processes of convergence and mobility in the EU-15 income distribution at regional level between 1980 and 2005. To do that the paper used the so-called distribution dynamics approach in two different settings: first considering all regions as independent entities (aspatial approach) and, afterwards, explicitly recognising that space matters (spatial approach). The comparison between the results obtained in these two settings made explicit how much space matters and in which direction it operates. Although both approaches have shown clear signs of convergence in regional per capita income in the EU between 1980 and 2005, three major differences emerged when we compare them. First, density functions reveal that the probability mass in the spatial setting is much more concentrated around the mean, this suggests that per capita income is not randomly distributed across space over the EU. Second, continuous intra-distribution dynamics indicates that the mobility degree, in particular in the lower and upper tails of the distribution, is higher when the role of space is explicitly included in the analysis. Third, this same conclusion is obtained with the discrete intra-distribution dynamics approach, this specifically showing that the mobility degree increases by more than 25% when the role of geographical location is considered and that poor regions surrounded by rich regions have much higher chances of escaping from the poverty trap than those surrounded solely by other poor regions.