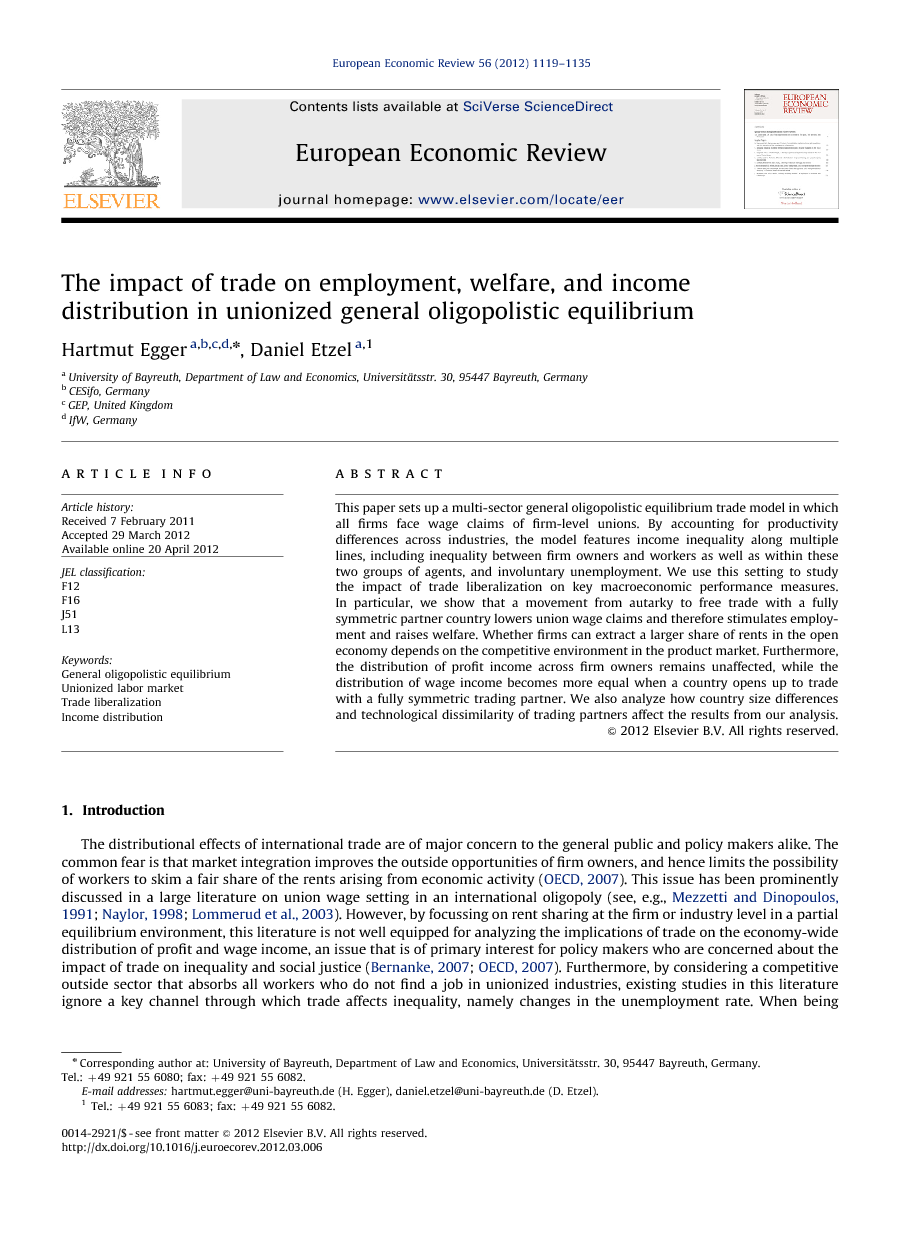 This paper sets up a multi-sector general oligopolistic equilibrium trade model in which all firms face wage claims of firm-level unions. By accounting for productivity differences across industries, the model features income inequality along multiple lines, including inequality between firm owners and workers as well as within these two groups of agents, and involuntary unemployment. We use this setting to study the impact of trade liberalization on key macroeconomic performance measures. In particular, we show that a movement from autarky to free trade with a fully symmetric partner country lowers union wage claims and therefore stimulates employment and raises welfare. Whether firms can extract a larger share of rents in the open economy depends on the competitive environment in the product market. Furthermore, the distribution of profit income across firm owners remains unaffected, while the distribution of wage income becomes more equal when a country opens up to trade with a fully symmetric trading partner. We also analyze how country size differences and technological dissimilarity of trading partners affect the results from our analysis.

This paper presents a general oligopolistic equilibrium model with a unit mass of heterogeneous industries, a small number of identical quantity-setting firms in either sector and imperfect labor markets due to the existence of firm-level unions. In this framework, we investigate how a movement from autarky to free trade with a fully symmetric partner country affects the product and labor market outcome. In particular, we show that trade lowers the scope of unions for excessive wage claims, while firms increase their output levels in the open economy. Beyond that, we analyze how these adjustments at the firm level affect aggregate variables in the general equilibrium. Thereby, we show that an opening up to trade, by lowering union wage claims, raises economy-wide employment and welfare. Aside from this positive efficiency effect, access to international trade reduces income inequality among production workers, while it leaves income inequality among firm owners unaffected. Finally, the impact of trade on inter-group inequality between firm owners and production workers is not clearcut in general. On the one hand, product market competition is stimulated, while, on the other hand, unions lower their wage claims in the open economy. Which of these two counteracting effects dominates depends on the degree of product market competition. More specifically, we show that inter-group inequality increases in response to trade liberalization if not more than two domestic firms are active in either industry. In order to see to what extent the results from our analysis hinge on the assumption of two fully symmetric trading partners, we consider two forms of country asymmetries in an extension to our benchmark model. As a first source of asymmetry, we consider country size differences. In this respect, our model leads to the expected result that a smaller economy experiences larger effects from trade, as it gets access to a larger foreign market than an otherwise identical economy of larger size. However, pure country size differences do not affect the main results from our analysis in a qualitative way. As a second source of asymmetry, we consider Ricardian technology differences between the two trading partners, and we show that these differences may affect the results from our analysis in a qualitative way. To be more specific, by relocating production according to the law of comparative advantage, technologically dissimilar economies face an additional channel through which gains from trade materialize, implying that the welfare stimulus of trade identified in the setting with fully symmetric trading partners is reinforced if countries differ in their technology. However, the relocation of economic activity towards a country's comparative advantage industries lowers aggregate employment and this effect may be sufficiently strong to induce a total negative employment effect of trade if the technological dissimilarity is sufficiently pronounced. Finally, if countries relocate production towards their high-productivity industries, technological dissimilarity fosters income inequality among firm owners, while its impact on inter-group inequality between firm owners and workers and intra-group inequality among production workers turns out to be not clearcut in general. However, the distributional effects of trade between two technologically dissimilar countries indicate that trade uncouples the distribution of profits from the distribution of wages even though union wage setting leads to rent sharing in our setting. In the working paper version of this manuscript, we have extended the benchmark model in two further dimensions in order to check robustness of our results. In a first extension, we have given up the assumption of constant unemployment benefits and considered benefits that are proportional to the average wage rate as an alternative compensation scheme and, in a second one, we have looked at industry-level instead firm-level unions. Since these modifications do not affect the main results from our analysis in a significant way, we decided against presenting them in this paper. Another possible extension that may be worthwhile to consider in future research is the analysis of marginal trade liberalization. While there are of course different possibilities to model partial trade liberalization in our setting, assuming that just a subset of industries opens up for free trade would be a particularly attractive option from the perspective of analytical tractability. In a benchmark model without productivity differences across industries, it is immediate that profit and wage inequality vanish in the closed as well as the open economy with full trade liberalization. However, there is inequality in both of these dimensions for intermediate levels of trade liberalization, implying that an increase in the share of open sectors exerts a non-monotonic impact on intra-group inequality in this baseline scenario. Things are more complicated in a sophisticated model variant that allows for productivity differences across industries. In this case, the impact of marginal trade liberalization crucially depends on which sectors are newly exposed to international trade and no general result can be derived without an additional assumption regarding the sector ranking in the time line of globalization. Deriving more detailed results in this respect as well as extending the model in other possible directions is beyond the scope of this paper but may be a worthwhile task for future research.