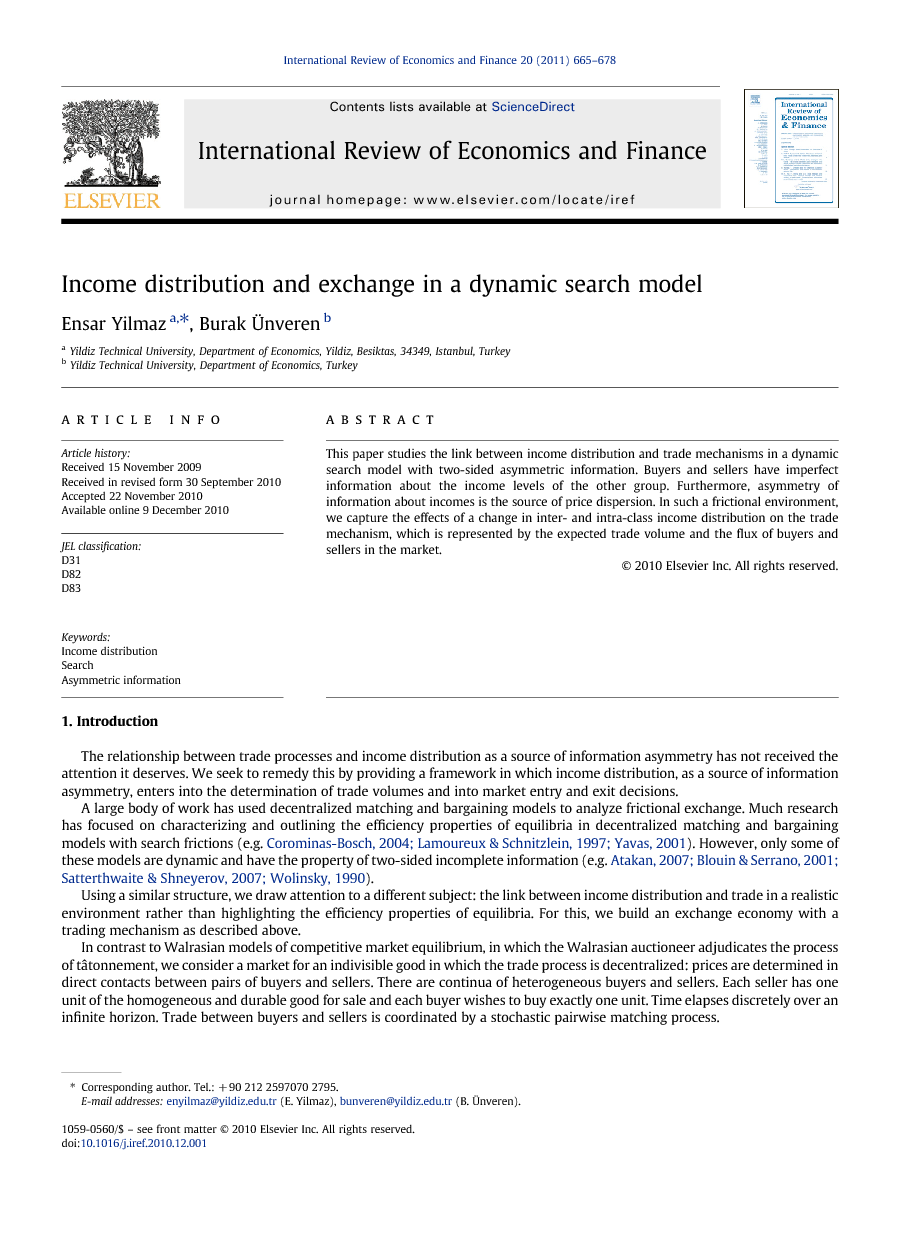 This paper studies the link between income distribution and trade mechanisms in a dynamic search model with two-sided asymmetric information. Buyers and sellers have imperfect information about the income levels of the other group. Furthermore, asymmetry of information about incomes is the source of price dispersion. In such a frictional environment, we capture the effects of a change in inter- and intra-class income distribution on the trade mechanism, which is represented by the expected trade volume and the flux of buyers and sellers in the market.

Though research into the effects of two-sided asymmetric information in a dynamic framework has burgeoned recently our contribution is the first, as far as we know, to use income distribution as a source of two-sided asymmetric information. There is a rich and significant interdependence between the income level of an agent, the economy-wide distribution of income, optimal decision of an agent and how the economy operates. Nonetheless, we believe that the relationship of the individual to society, as exemplified by their class status, suffers from a lack of attention. However, its pertinence demanded a rigorous theoretical exposition. Thus, we specified the dispersion of income as the unique source of asymmetric information since this approach directly provides an opportunity to deduce a relationship between income distribution and market operations. Among a diverse set of alternatives, the notions of expected volume (amount) of trade and flux of agents (entry and exit of agents) were chosen to represent the system in a parsimonious manner. Our results are primarily based on comparative statics with respect to parameters of uniformly distributed incomes of agents. The results reveal that the effects of an increase in total income, leading to a change in inter-class income distribution on the expected trade volume, depends on how it is shared among agents. The expected volume of trade increases if the increase in income is sufficiently high on the behalf of buyers. This factor also determines the direction of the buyers' flux. An increase in income that is sufficiently high on the behalf of buyers will lead more buyers to integrate into the market. However, determining the direction of sellers' flux requires the knowledge of several factors. First, we must know the degree of buyers' response to an increase in critical prices as a consequence of increased sellers' reluctance as a result of increased seller income. Secondly, we must know how increases in income are shared. Although the change in the total volume of traders is ambiguous due to the ambiguity of the change in the volume of sellers, we showed that a higher increase in the average income of buyers with respect to that of sellers results in more trade. Hence, gains from trade for both groups of traders increase. The policy-maker can produce such a result by an appropriate tax alignment on buyers. Inter-class income distribution does not deal with dispersion of income in each class separately. Intra-class income distribution is also of interest. We found that – as dispersion of sellers' income expands while keeping total income fixed – expected trade volume increases. This result arises from the fact that sellers whose incomes are reduced tend to trade more, thus lowering their offer prices. The willingness of active sellers to transact increases. Consider, for example, small-scale shops whose owners are asymmetrically affected by a shock, which results in them selling their goods more enthusiastically. On the other hand, the relation between the dispersion of buyers' income and expected volume of trade is ambiguous and depends on the relative strengths of income, price and uncertainty effects. It is also possible to incorporate above inter-class and intra-class income distribution concepts. Accordingly, we showed that if the dispersion among buyers is greater than that among sellers, increasing the income of buyers at the bottom of the income distribution and decreasing the income of sellers at the top of the income distribution yields an increase in the expected amount of trade. If it is possible, therefore, to transfer income from idle sellers to idle buyers through an appropriate welfare tax, this could lead to greater trading volumes. Further, from the perspective of the policy-maker, the greater is trade the greater is the size of the tax base, resulting therefore in higher tax revenues. We also find that the cross effects of a change in income dispersion on the flux of agents depends on the degree of the response of buyers' raising critical prices to the increased reluctance of sellers, which is a consequence of their increased income. Finally, we stress that our results are confined to the context in which buyers constitute the short side of the market. This assumption is crucial to many of the results in the model. We believe that our results would be more general if they were derived for a production economy instead of the simple exchange economy we described.