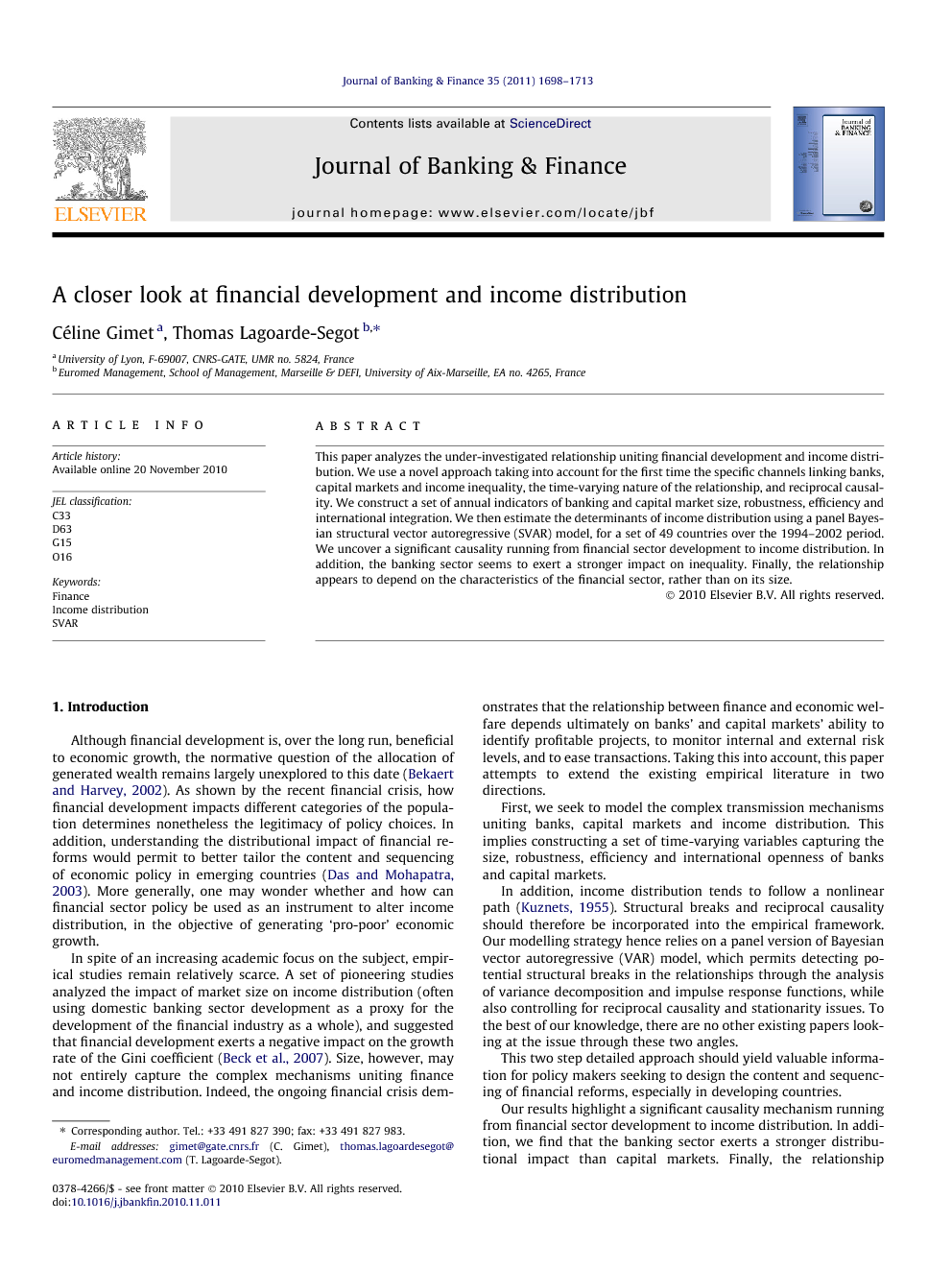 This paper analyzes the under-investigated relationship uniting financial development and income distribution. We use a novel approach taking into account for the first time the specific channels linking banks, capital markets and income inequality, the time-varying nature of the relationship, and reciprocal causality. We construct a set of annual indicators of banking and capital market size, robustness, efficiency and international integration. We then estimate the determinants of income distribution using a panel Bayesian structural vector autoregressive (SVAR) model, for a set of 49 countries over the 1994–2002 period. We uncover a significant causality running from financial sector development to income distribution. In addition, the banking sector seems to exert a stronger impact on inequality. Finally, the relationship appears to depend on the characteristics of the financial sector, rather than on its size

Although financial development is, over the long run, beneficial to economic growth, the normative question of the allocation of generated wealth remains largely unexplored to this date (Bekaert and Harvey, 2002). As shown by the recent financial crisis, how financial development impacts different categories of the population determines nonetheless the legitimacy of policy choices. In addition, understanding the distributional impact of financial reforms would permit to better tailor the content and sequencing of economic policy in emerging countries (Das and Mohapatra, 2003). More generally, one may wonder whether and how can financial sector policy be used as an instrument to alter income distribution, in the objective of generating ‘pro-poor’ economic growth. In spite of an increasing academic focus on the subject, empirical studies remain relatively scarce. A set of pioneering studies analyzed the impact of market size on income distribution (often using domestic banking sector development as a proxy for the development of the financial industry as a whole), and suggested that financial development exerts a negative impact on the growth rate of the Gini coefficient (Beck et al., 2007). Size, however, may not entirely capture the complex mechanisms uniting finance and income distribution. Indeed, the ongoing financial crisis demonstrates that the relationship between finance and economic welfare depends ultimately on banks’ and capital markets’ ability to identify profitable projects, to monitor internal and external risk levels, and to ease transactions. Taking this into account, this paper attempts to extend the existing empirical literature in two directions. First, we seek to model the complex transmission mechanisms uniting banks, capital markets and income distribution. This implies constructing a set of time-varying variables capturing the size, robustness, efficiency and international openness of banks and capital markets. In addition, income distribution tends to follow a nonlinear path (Kuznets, 1955). Structural breaks and reciprocal causality should therefore be incorporated into the empirical framework. Our modelling strategy hence relies on a panel version of Bayesian vector autoregressive (VAR) model, which permits detecting potential structural breaks in the relationships through the analysis of variance decomposition and impulse response functions, while also controlling for reciprocal causality and stationarity issues. To the best of our knowledge, there are no other existing papers looking at the issue through these two angles. This two step detailed approach should yield valuable information for policy makers seeking to design the content and sequencing of financial reforms, especially in developing countries. Our results highlight a significant causality mechanism running from financial sector development to income distribution. In addition, we find that the banking sector exerts a stronger distributional impact than capital markets. Finally, the relationship appears to depend on the financial sector’s transparency and ability to allocate resources optimally, rather than its size and level of international integration. The remainder of the paper is structured as follows. Section 2 discusses the theoretical linkages uniting financial sector development and income distribution. Section 3 presents our database and some methodological notes on the construction of our variables. Section 4 describes our modelling framework, Section 5 discusses our results and Section 6 brings together our conclusions.

This paper examined the relationship uniting financial development and income distribution, taking into account the specific channels linking banks, capital markets and income inequality, as well as the time-varying nature of the relationship. We constructed a set of annual indicators of banking and capital market size, robustness, efficiency and international integration. We then estimated the dynamic impact of these variables on income distribution using a panel Bayesian structural vector autoregressive (SVAR) model, for a set of 49 countries over the 1994–2002 period. We found that financial sector development has a significant effect on income distribution controlling for reciprocal causality and other factors. While this echoes and confirms previous studies, our approach permitted to detect that the banking sector exerts a stronger impact on inequality, and that the relationship depends on the characteristics of the financial sector, more than its size. Our findings have a few normative implications for the content and sequencing of financial reforms, especially in developing countries. First, it appears that large crony domestic banks are a bigger threat to equality than capital market and international investors. Second, reforms seeking to improve the ability of banks and capital markets to monitor risks and allocate resources should be prioritized over other initiatives. In the first stage of reforms, prudential supervision and anti-monopolistic policies could be implemented in the banking sector, while corporate governance and information disclosure is improved in capital markets. Financial sector expansion policy programs (IPO, privatization etc.) could then take implemented as a second step. During the entire process, international financial integration levels should be monitored carefully. We may suggest future directions for research in finance and inequality. First, new theoretical models need be developed to formalize the suggested inductive mechanisms. Second, constructing a new database capturing the characteristics of the banking sector (e.g. banking sector concentration, ownership type, project screening procedures) across developing countries would permit to further refine the analysis and policy recommendation. Finally, empirical research on the determinants of income distribution would greatly benefit from an updated international inequality database.