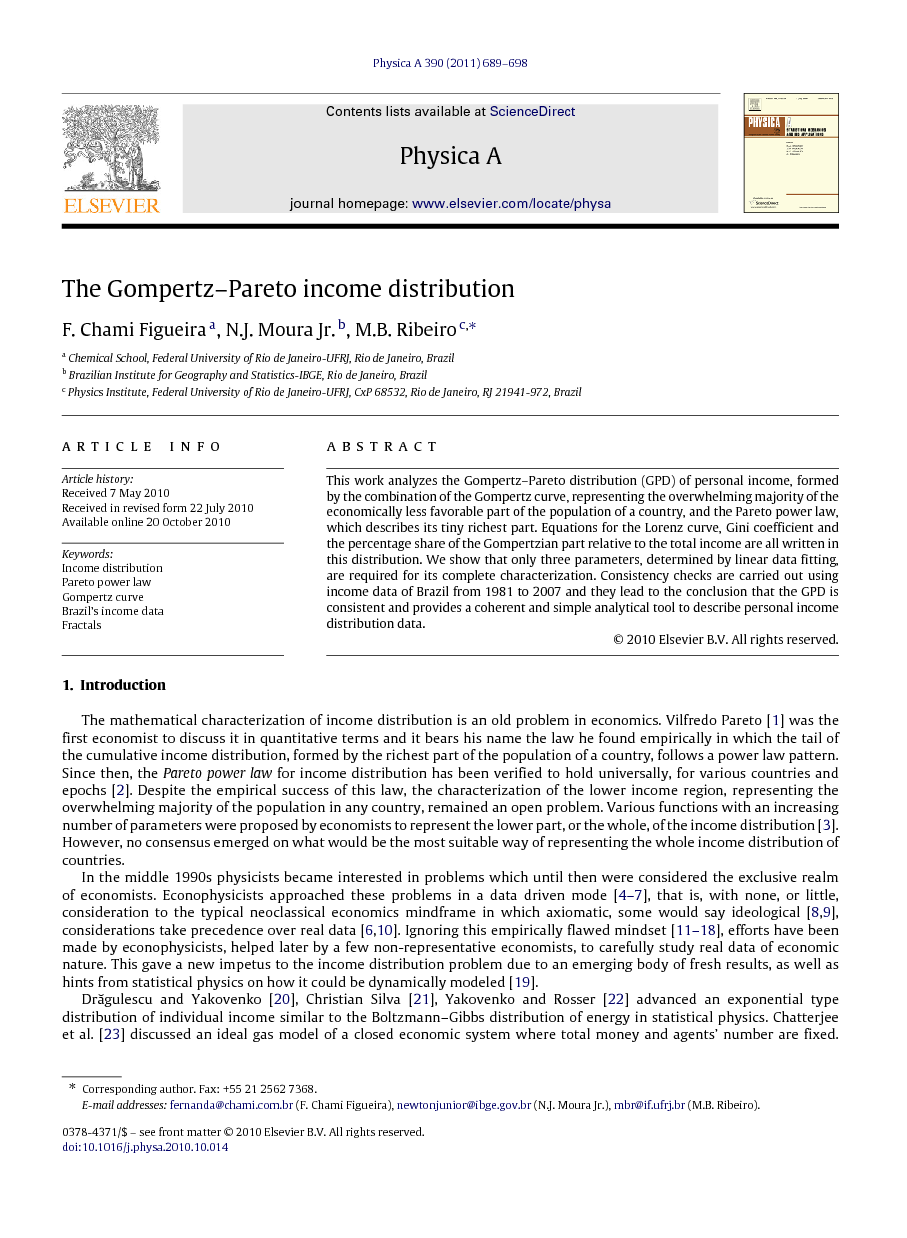 This work analyzes the Gompertz–Pareto distribution (GPD) of personal income, formed by the combination of the Gompertz curve, representing the overwhelming majority of the economically less favorable part of the population of a country, and the Pareto power law, which describes its tiny richest part. Equations for the Lorenz curve, Gini coefficient and the percentage share of the Gompertzian part relative to the total income are all written in this distribution. We show that only three parameters, determined by linear data fitting, are required for its complete characterization. Consistency checks are carried out using income data of Brazil from 1981 to 2007 and they lead to the conclusion that the GPD is consistent and provides a coherent and simple analytical tool to describe personal income distribution data.

In this paper we have studied the Gompertz–Pareto distribution (GPD), formed by the combination of the Gompertz curve, representing the overwhelming majority of the economically less favorable part of the population of a country, and the Pareto power law, describing its tiny richest part. We discussed how the GPD is fully characterized by only three positive parameters, inasmuch as boundary and continuity conditions limit the parametric freedom of this distribution, and which can be determined by linear data fitting. Equations for the cumulative income distribution, complementary cumulative income distribution, income probability density, Lorenz curve, Gini coefficient and the percentage share of the Gompertzian part were all written in this distribution. We discussed how the GPD allows for an exponential approximation in its middle and upper sections outside the Paretian region. Application of this income distribution function was made to the Brazilian data from 1981 to 2005, previously published by Moura Jr. and Ribeiro [28], with additional new results for 2006 and 2007. Consistency tests were carried out by comparing the Gini coefficients obtained directly from the original data, without any assumption for the shape and form of the distribution, with results obtained by using the fitted parameters in order to re-obtain those coefficients. Similar tests were made with the values of the percentage share of the Gompertzian part of the distribution. The results indicate a general consistency between the original values of both quantities as compared to the calculated ones using the GPD parameters, although we found a systematic, but mostly stable, discrepancy between these quantities in the range of 6%–7%. This small discrepancy might be due to some statistical bias possibly present in the original calculation of the GPD parameters of Brazil. In conclusion, the results presented in this paper suggest that the GPD does provide a coherent and analytically simple representation for income distribution data leading to consistent results, at least as far as data from Brazil is concerned.