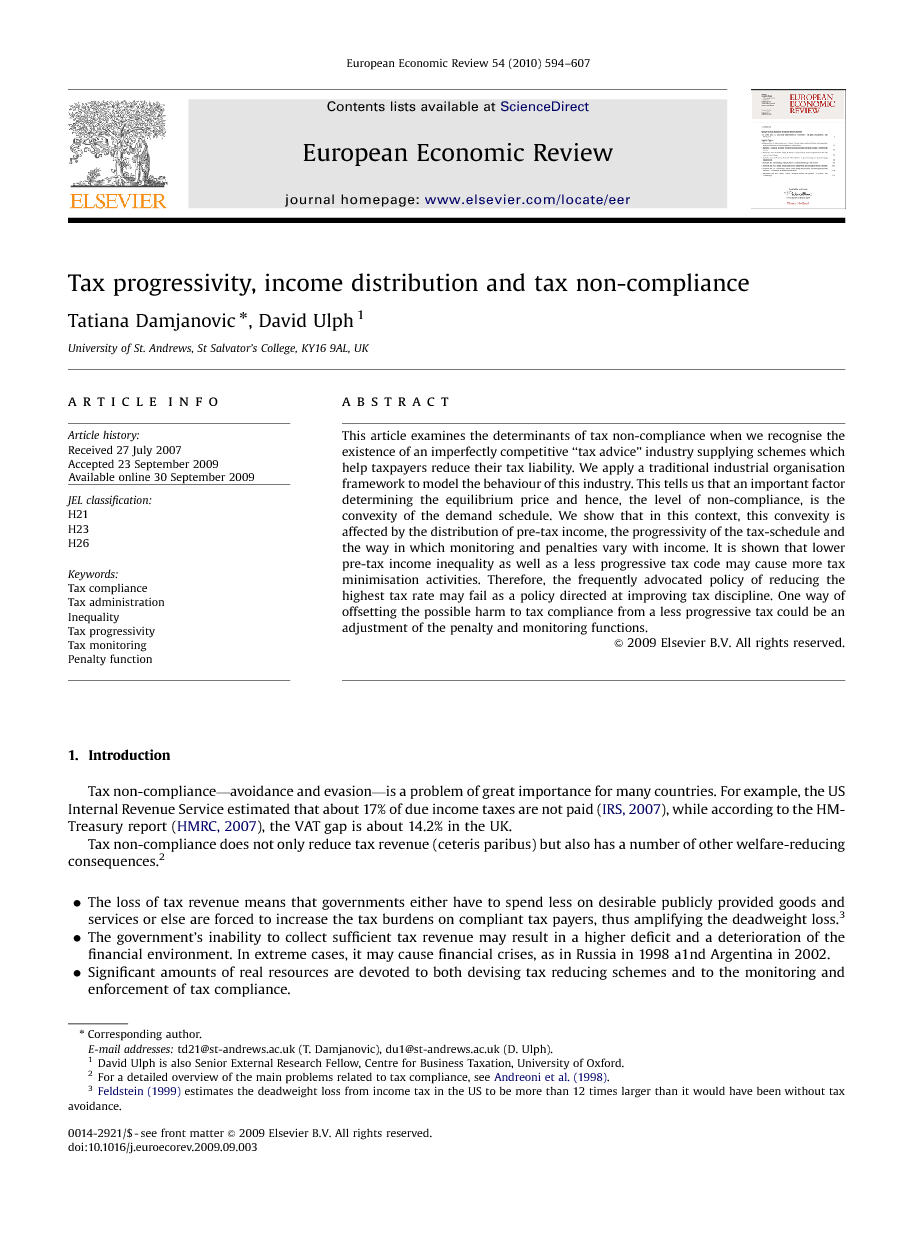 This article examines the determinants of tax non-compliance when we recognise the existence of an imperfectly competitive “tax advice” industry supplying schemes which help taxpayers reduce their tax liability. We apply a traditional industrial organisation framework to model the behaviour of this industry. This tells us that an important factor determining the equilibrium price and hence, the level of non-compliance, is the convexity of the demand schedule. We show that in this context, this convexity is affected by the distribution of pre-tax income, the progressivity of the tax-schedule and the way in which monitoring and penalties vary with income. It is shown that lower pre-tax income inequality as well as a less progressive tax code may cause more tax minimisation activities. Therefore, the frequently advocated policy of reducing the highest tax rate may fail as a policy directed at improving tax discipline. One way of offsetting the possible harm to tax compliance from a less progressive tax could be an adjustment of the penalty and monitoring functions.

In this paper, we have modelled the tax advice industry which adjusts the supply of tax reduction schemes in response to changes in aggregate demand. Within this model, we have shown how levels of compliance respond to a number of factors including the progressivity of the tax schedule and the distribution of taxable income. We have shown that it is extremely important to take this endogenous supply into account since it produces conclusions that run counter to much of the existing literature, but can also help explain phenomena that are otherwise hard to explain with existing models. For example, we have argued that a reduction in inequality or a decrease in tax progressiveness may result in a fall of the share of compliant taxpayers. Further, we have provided arguments against the reduction in the highest marginal tax rate as a policy directed at improving tax discipline. We have also shown that when the government is reluctant to impose a more progressive tax code, it can still make tax evasion demand less equally distributed by designing a proper audit and punishment function. Finally, we have shown that our results are robust to the assumption on market structure, since they have been proved for Cournot game quantity competition with conjectural variation and a bargaining model with a reserve price. A significant limitation of the model is the assumption that there is just one type of tax scheme. Ulph (2009) extends the model to the case with many tax schemes ranging from tax planning through tax avoidance to tax evasion, each with very different risk profiles and expected payoffs. However, in his model, there is perfect competition so prices are exogenous and determined by costs