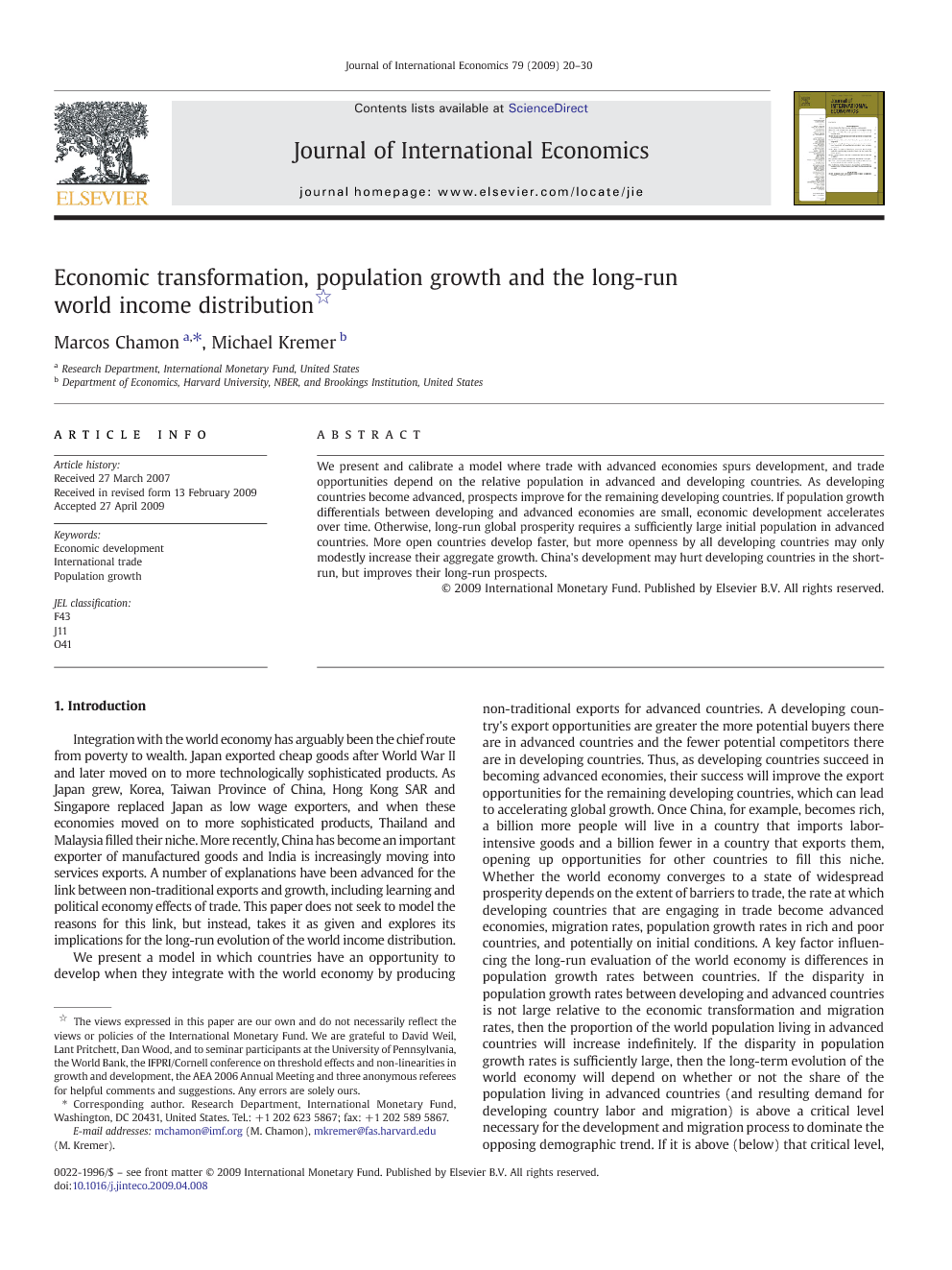 This paper presented a simple model of trade and development where the prospects for developing countries depend on integration with the world economy. The opportunities for integration improve as the population in advanced countries grows. As developing countries become advanced economies, they no longer compete for export markets with other developing countries, and instead will import from them. This can lead to accelerating global development and widespread prosperity if the difference in population growth rates in advanced and developing countries is small. If that difference is large, widespread prosperity will hinge on whether or not the current share of the world population in advanced countries is above a critical threshold necessary for the transformation and migration processes to dominate the demographic trends. The model also yields strong non-linearities for growth across countries, where small differences in transaction costs associated with trade can have major implications for which developing countries will grow first. Those combined costs, which can encompass different aspects, including policy-related costs, will rank countries ordinally along a queue where they will wait for their chance to join the global economy. While policy improvements can move an individual country forward in that queue, the developing country labor that can be absorbed by the global economy is ultimately constrained by the size of the population in advanced countries. As a result, an individual country's growth response to a policy improvement can be much larger than the global growth response to a similar improvement in all developing countries. This can explain why growth has not increased substantially despite dramatic improvements in the economic policies of several developing countries. These results also have interesting implications for the growth prospects of lagging developing regions, such as Africa. It is possible that Africa's prospects will remain limited over the short- and medium-term if it lies behind China and India in the “development queue.” But Africa's prospects should improve substantially in the long-run once labor becomes “expensive” in China and India, or if continuing global development leads to a sustained improvement in their terms of trade. The non-linearities in the growth process and threshold effects proposed in this paper suggest caution should be used when extrapolating the existing empirical evidence on economic growth into the future. Over short horizons, these results are likely to exaggerate the developing world-wide benefits of policy improvements, as some of the observed growth may come at the expense of other developing countries if the queuing effects described are at play. Over longer horizons, these empirical results are likely to be over-pessimistic, as country characteristics that lead to low growth today may allow for high growth if and when the global economy reaches a sufficiently advanced stage. For example, the same policies that make a country unattractive to foreign investors today may not discourage them from investing in the future if that country becomes one of the last places in the world where labor is still “cheap.” But if there are countries whose policies are so bad that they would never successfully integrate into the global economy, then the conditions required to ensure widespread prosperity in the long-run become much stricter, since migration would be the only route to prosperity for the population in these hopeless developing countries. The old conventional wisdom was that population growth in developing countries was a major problem. The new conventional wisdom is that population growth is rapidly declining and hence not an obstacle to development. Our results highlight the importance of relative population growth between rich and poor countries. Because population growth has been declining in both the rich and the poor world, the differential is relatively persistent. It's worth noting that in our model, population growth in developing countries will create negative externalities on other countries, while population growth and open immigration policies in advanced countries will create positive externalities. The model suggests that the future of the world economy may well be decided by a race between rapid economic growth in China and India and population growth in the lagging developing regions. To end on a more positive note, while there have been relatively few cases of developing countries that became rich (mainly a handful of East Asian and Southern European countries), one can make a strong case that a number of key developing countries (in addition to China and India) are on track towards becoming advanced economies over the next few decades. Global trade continues to grow faster than world GDP, and improvements in telecommunications and transportation should further facilitate the integration of developing countries in the global economy, as the lower these costs the easier it becomes to break-down the production process so that simpler tasks can be performed in developing countries. If that integration is indeed constrained by absorption capacity, as in our model, such a confluence of positive shocks can unleash non-linearities and lead to accelerating global growth at an unprecedented scale