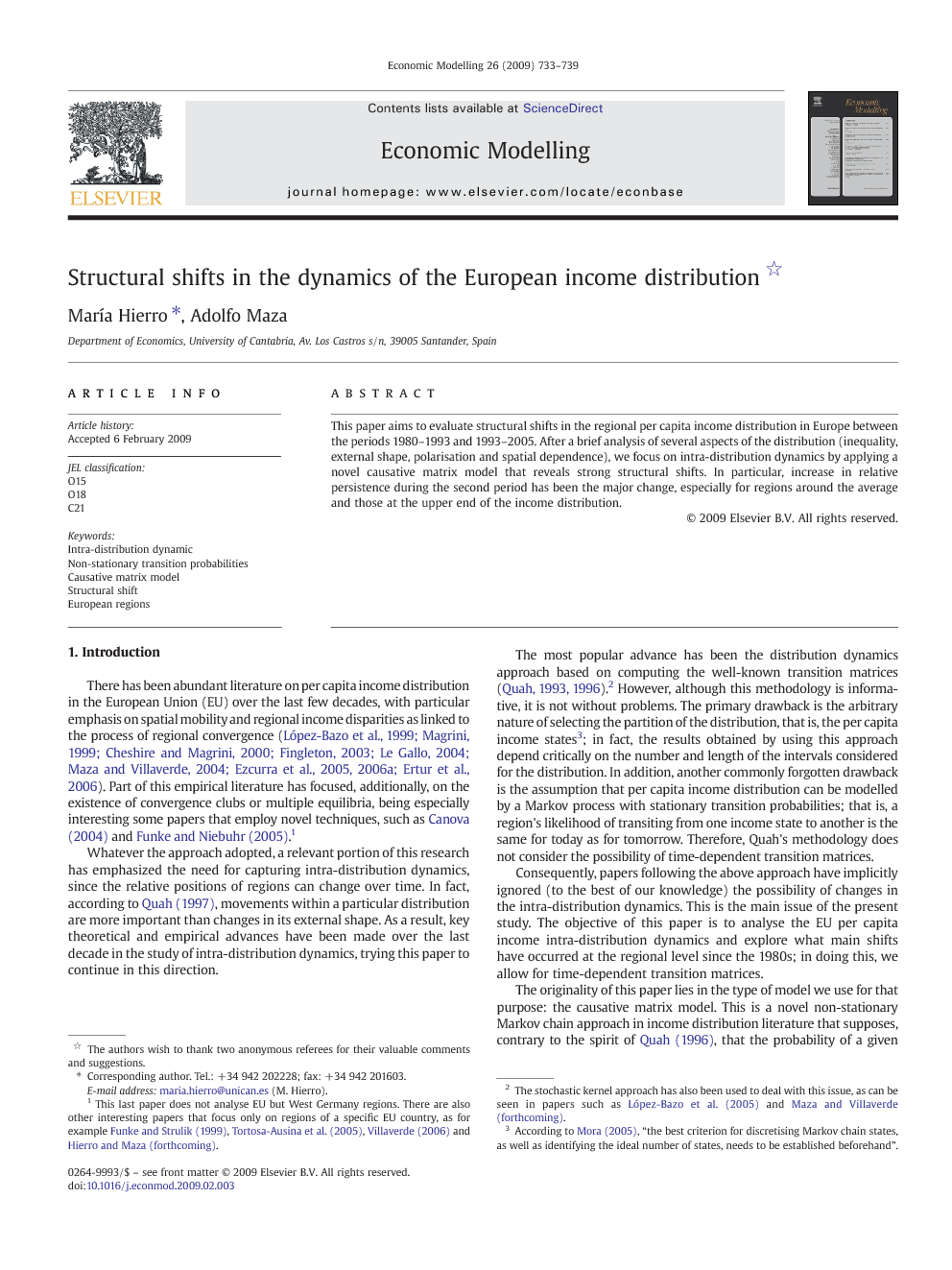 This paper aims to evaluate structural shifts in the regional per capita income distribution in Europe between the periods 1980–1993 and 1993–2005. After a brief analysis of several aspects of the distribution (inequality, external shape, polarisation and spatial dependence), we focus on intra-distribution dynamics by applying a novel causative matrix model that reveals strong structural shifts. In particular, increase in relative persistence during the second period has been the major change, especially for regions around the average and those at the upper end of the income distribution.

There has been abundant literature on per capita income distribution in the European Union (EU) over the last few decades, with particular emphasis on spatial mobility and regional income disparities as linked to the process of regional convergence (López-Bazo et al., 1999, Magrini, 1999, Cheshire and Magrini, 2000, Fingleton, 2003, Le Gallo, 2004, Maza and Villaverde, 2004, Ezcurra et al., 2005, Ezcurra et al., 2006a and Ertur et al., 2006). Part of this empirical literature has focused, additionally, on the existence of convergence clubs or multiple equilibria, being especially interesting some papers that employ novel techniques, such as Canova (2004) and Funke and Niebuhr (2005).1 Whatever the approach adopted, a relevant portion of this research has emphasized the need for capturing intra-distribution dynamics, since the relative positions of regions can change over time. In fact, according to Quah (1997), movements within a particular distribution are more important than changes in its external shape. As a result, key theoretical and empirical advances have been made over the last decade in the study of intra-distribution dynamics, trying this paper to continue in this direction. The most popular advance has been the distribution dynamics approach based on computing the well-known transition matrices (Quah, 1993 and Quah, 1996).2 However, although this methodology is informative, it is not without problems. The primary drawback is the arbitrary nature of selecting the partition of the distribution, that is, the per capita income states3; in fact, the results obtained by using this approach depend critically on the number and length of the intervals considered for the distribution. In addition, another commonly forgotten drawback is the assumption that per capita income distribution can be modelled by a Markov process with stationary transition probabilities; that is, a region's likelihood of transiting from one income state to another is the same for today as for tomorrow. Therefore, Quah's methodology does not consider the possibility of time-dependent transition matrices. Consequently, papers following the above approach have implicitly ignored (to the best of our knowledge) the possibility of changes in the intra-distribution dynamics. This is the main issue of the present study. The objective of this paper is to analyse the EU per capita income intra-distribution dynamics and explore what main shifts have occurred at the regional level since the 1980s; in doing this, we allow for time-dependent transition matrices. The originality of this paper lies in the type of model we use for that purpose: the causative matrix model. This is a novel non-stationary Markov chain approach in income distribution literature that supposes, contrary to the spirit of Quah (1996), that the probability of a given region moving to an income state j from an income state i may change over time; in other words, the model permits time-dependent transition matrices. Through this analysis, we can obtain insight into changes occurred in relative mobility and relative persistence and, as another added value of such an approach, a stability measure to assess the amount of change in intra-distribution dynamics. The data employed in this study consist of relative per capita income (Gross Added Value) in Purchasing Power Standards (PPS) of 196 European regions (NUTS2)4 for the period between 1980 and 2005; these are regions belonging to the fifteen-member EU (EU-15).5 Although there are merits to using absolute per capita income values, it is more usual in the literature on income distribution to take relative variables, in this case regional per capita incomes normalised by the European average (EU-15 = 100). This is because relative values allow us to correct for the effects of business cycles and trends in the European average income. The periods to be compared are from 1980–1993 and 1993–2005. We have chosen these two periods for several reasons. First, data availability; second, they are periods of similar length; third, the economic growth rates in Europe during these two periods are quite different: the former registered a relatively slow growth (an annual rate of 1.67% in the EU-15) while the latter recorded a much faster rate (2.21). The remainder of the paper is organised as follows. In Section 2, as a starting point for later analysis, we present a brief overview on the dynamics of the EU income distribution at the regional level from 1980–2005. To do this, we only refer to years 1980, 1993 and 2005. In Section 3, we examine shifts in intra-distribution dynamics between the 1980–1993 and 1993–2005 periods using a causative matrix model. This approach, while already employed in other topics, is original in their use of income distribution analyses. Finally, in Section 4, we summarize our main conclusions.

Although the dynamics of the European income distribution has been an increasingly studied issue in the economic literature, the possibility of structural shifts when modelling this dynamics has not been, to the best of our knowledge, addressed before. This paper has responded to this criticism by carrying out an in depth investigation into possible structural shifts in this dynamics between two periods (1980–1993 and 1993–2005) characterized by significantly different rates of economic growth. Before that, a descriptive framework was presented which allowed a comparative depiction of essential characteristics of the regional dynamics in the EU-15 per capita income distribution for the years bracketing each period. Firstly, computing a set of inequality measures pointed to a notorious decline in regional disparities between 1980 and 1993 followed by a negligible decrease from 1993 to 2005. A similar conclusion was drawn from comparing the external shape of the income distribution for these three years by means of non-parametric kernel smoothed densities: the main differences occurred between 1980 and 1993, with a strong movement of income distribution toward the average values and a vanishing of the distribution's tails. After that, estimating the polarisation index evidenced an intense decrease in the polarisation degree between 1980 and 1993, while stable levels of polarisation were found between 1993 and 2005. Finally, the spatial dependence analysis also revealed the existence of a pattern of positive spatial dependence in the regional per capita income distribution that, to a great extent, would explain its polarisation. This first glance at the European income distribution made clear that underlying structural shifts exist. However, from a methodological point of view, the comparison of the distribution at the years bracketing each period is not a good computational practice, since all structural shifts at between times are completely overlooked. Besides, the well-described changes in the external shape of the income distribution in the previous section, although informative, should be complemented by a more detailed and integrative approach involving the possibility of changes in the relative position of regions inside the distribution (intra-distribution dynamics). To pursue this scope, this paper applied a novel technique that resolves these two problems: the causative matrix model. This model presents a relative intra-distribution dynamics approach that enabled us to understand changes in relative mobility and relative persistence between periods. In addition, this technique introduces a relevant innovation from the traditional Markov chain approach popularized by Quah (1996) in income distribution literature; namely, the use of non-stationary transition probabilities, implying all changes over time are considered in intra-distribution dynamics modelling. The first step in model estimation involved the computation of non-stationary transition probability matrices for the periods 1980–1993 and 1993–2005 by applying the Chapman–Kolmogorov rule to year-to-year transition matrices. Based on this estimation, the right and left causative matrices derived from the causative matrix analysis led to the following findings. First, structural shifts between 1980–1993 and 1993–2005 were certainly very strong, as it was demonstrated by the high first eigenvalue of each causative matrix; this is the main result of the paper as it shows evidence of a considerable amount of changes in intra-distribution dynamics. Second, as regards the nature of these changes, it is worth mentioning that the change in relative persistence was the foremost structural shift in the EU intra-distribution dynamics between the two periods, showing that a remarkable increase in relative persistence occurred within regions around the average and those located at the upper end of the distribution. Third, despite changes in the relative mobility being quite small, the mobility degree towards the middle and neighbouring income states increased in relative terms from 1993–2005 as compared to 1980–1993. Finally, some policy recommendations should be derived from these findings. Despite the expansion of the structural funds since the late 1980s as part of the integration process in the European Union, our study reveals that, from mid-1990s, high relative persistence has been, and probably will be, the major driving-force in intra-distribution dynamics. It should be clear that a positive impact of the European funds on income convergence is actually conditioned by the effectiveness of regional policies and distributional efforts to transfer funds to poorer regions. In this regard, a more in depth investigation into the income effects of regional policies, especially now when the reflection process on the future of cohesion policy takes place in the context of a compulsory budget review, is urgently needed.