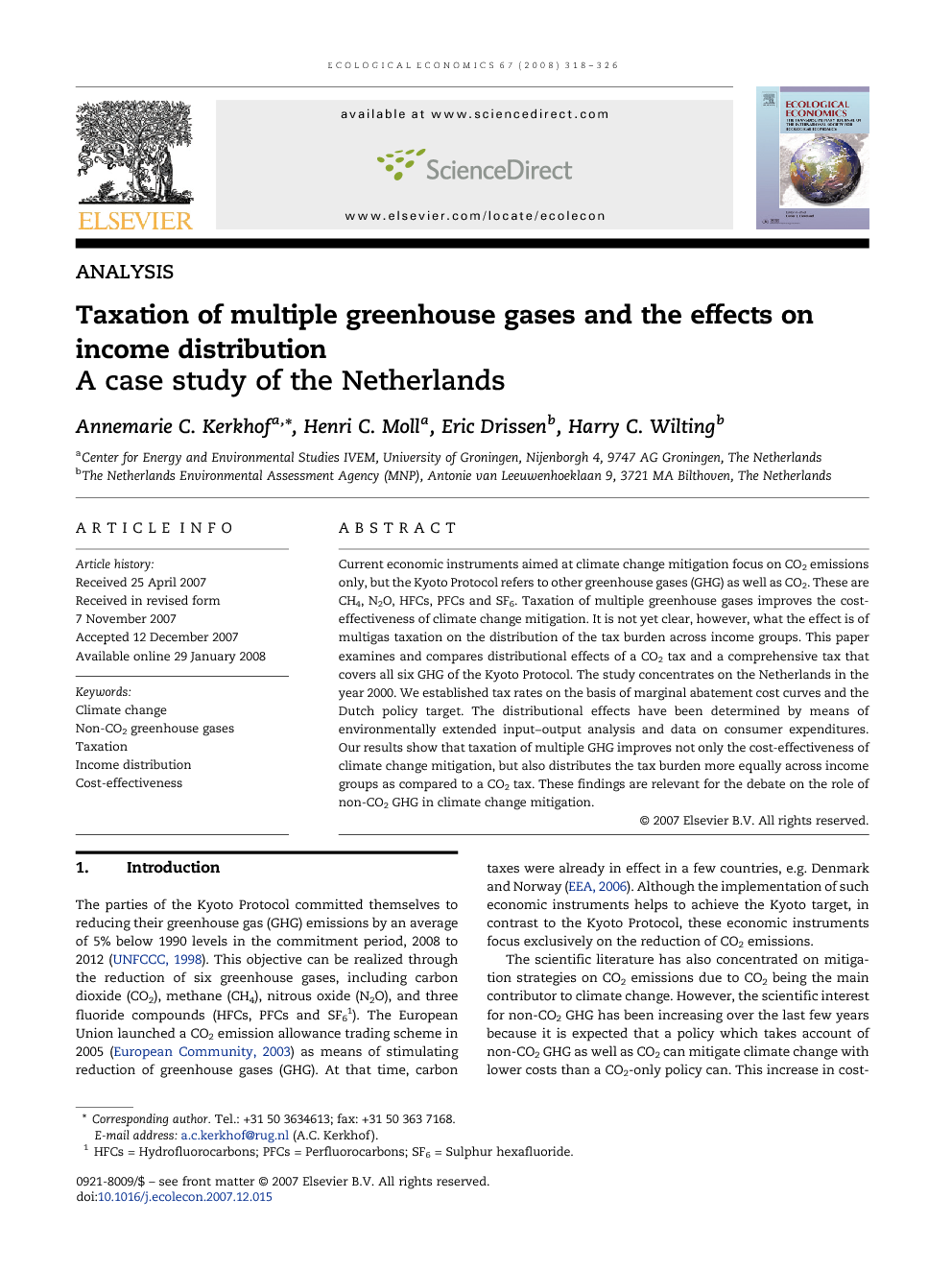 Current economic instruments aimed at climate change mitigation focus on CO2 emissions only, but the Kyoto Protocol refers to other greenhouse gases (GHG) as well as CO2. These are CH4, N2O, HFCs, PFCs and SF6. Taxation of multiple greenhouse gases improves the cost-effectiveness of climate change mitigation. It is not yet clear, however, what the effect is of multigas taxation on the distribution of the tax burden across income groups. This paper examines and compares distributional effects of a CO2 tax and a comprehensive tax that covers all six GHG of the Kyoto Protocol. The study concentrates on the Netherlands in the year 2000. We established tax rates on the basis of marginal abatement cost curves and the Dutch policy target. The distributional effects have been determined by means of environmentally extended input−output analysis and data on consumer expenditures. Our results show that taxation of multiple GHG improves not only the cost-effectiveness of climate change mitigation, but also distributes the tax burden more equally across income groups as compared to a CO2 tax. These findings are relevant for the debate on the role of non-CO2 GHG in climate change mitigation.

The parties of the Kyoto Protocol committed themselves to reducing their greenhouse gas (GHG) emissions by an average of 5% below 1990 levels in the commitment period, 2008 to 2012 (UNFCCC, 1998). This objective can be realized through the reduction of six greenhouse gases, including carbon dioxide (CO2), methane (CH4), nitrous oxide (N2O), and three fluoride compounds (HFCs, PFCs and SF61). The European Union launched a CO2 emission allowance trading scheme in 2005 (European Community, 2003) as means of stimulating reduction of greenhouse gases (GHG). At that time, carbon taxes were already in effect in a few countries, e.g. Denmark and Norway (EEA, 2006). Although the implementation of such economic instruments helps to achieve the Kyoto target, in contrast to the Kyoto Protocol, these economic instruments focus exclusively on the reduction of CO2 emissions. The scientific literature has also concentrated on mitigation strategies on CO2 emissions due to CO2 being the main contributor to climate change. However, the scientific interest for non-CO2 GHG has been increasing over the last few years because it is expected that a policy which takes account of non-CO2 GHG as well as CO2 can mitigate climate change with lower costs than a CO2-only policy can. This increase in cost-effectiveness may arise from the availability of relatively cheap mitigation options for non-CO2 GHG and the still considerable contribution of non-CO2 GHG to climate change. In 2000, non-CO2 GHG (CH4, N2O, HFCs, PFCs and SF6 expressed in CO2 equivalents) jointly contributed around 28% to global total emissions of Kyoto gases (Olivier et al., 2005). A few studies have already demonstrated that climate change mitigation under a so-called ‘multigas’ policy will lead to an appreciable reduction in costs versus a CO2-only mitigation policy (Reilly et al., 1999, Manne and Richels, 2001 and Weyant et al., 2006). Weyant et al. (2006) give an overview of the results in the Special Issue of the Energy Journal on Multi-Greenhouse Gas Mitigation. Here, they report the carbon price reduction in a multigas strategy as a percentage of the price in a CO2-only strategy when meeting a radiative forcing stabilization target of 4.5 W/m2 relative to pre-Industrial times by 2150. In 2025, the average carbon price reduction across 18 models is 48%. Twelve models have generated results for the year 2100 in which the average carbon price reduction across these twelve models is 39%. So, cost savings on climate change mitigation within a multigas strategy are substantial at the global level. The potential of non-CO2 GHG to reduce the costs of climate change mitigation might be effectuated by extending the scope of economic instruments from CO2 to all six gases of the Kyoto Protocol. Even though economic instruments are commonly known to be efficient instruments for achieving environmental goals in a cost-effective manner, concerns about inequitable distributions of burdens across households turn out to be a serious barrier for implementing such instruments at the national level (EEA, 2000). Judging from the practical experience with CO2 taxation, the impact of carbon taxes on the distribution of income appears to be a fundamental factor determining its acceptability (Vermeend and Van der Vaart, 1998, Ekins, 1999 and Baranzini et al., 2000). Thus, insight into such distributional effects is highly relevant for policy-makers when they consider implementation of a multigas strategy by means of economic instruments. Several studies have already examined the distribution of costs of CO2 taxation across income groups. The review studies of the OECD (1995) and Speck (1999) suggest that carbon taxes tend to be regressive in many OECD countries, which means that households with lower incomes spend a larger fraction of their income on CO2 tax payments than those with higher incomes. A number of country-specific studies have demonstrated that regressivity not only increases with carbon taxes paid directly by households, but also with carbon taxes imposed on industry (Symons et al., 1994, Cornwell and Creedy, 1996, Labandeira and Labeaga, 1999 and Wier et al., 2005). When a tax is imposed on CO2 emissions as well as non-CO2 GHG, it is very likely that the tax burden will be differently distributed across economic sectors, because non-CO2 GHG originate from other sources than CO2 emissions. Relatively high amounts of CH4 and N2O are emitted during processes in agriculture whereas CO2 emissions mainly originate from burning fossil fuels in industry, energy supply and transport (CBS and MNP, 2004). This may influence the distribution of the tax burden across consumers due to different consumption patterns. Yet, there is still no insight into the distribution of the tax burden across income groups in a multigas strategy. This paper aims to examine and compare the distribution, across income groups, of the tax burden of a comprehensive GHG tax (covering all Kyoto gases), and a CO2 tax imposed on industry and households. We took as a case study the Netherlands in the year 2000. Section 2 explains the method, while Section 3 considers the data. The results are described in Section 4 and the results and conclusions are discussed in Section 5.

The purpose of this study was to examine and compare the distribution, across income groups, of the tax burden of a comprehensive GHG tax (covering all six Kyoto gases), and a CO2 tax imposed on industry and households in the Netherlands in the year 2000. Our results show that both taxes are regressive. However, a GHG tax seems to distribute the tax burden more equally across income groups than a CO2 tax. This can be mainly explained by two factors. Firstly, extending the scope of taxation from CO2 to all six gases of the Kyoto protocol shifts the tax burden from energy-intensive products to food products. Secondly, the expenditures on energy-intensive products and food products differ across income groups. Low-income households spend a slightly greater share of their income on food than high-income households, however, this difference is smaller than the difference with respect to gas and electricity. These results can guide policy-makers in the policy-making process with respect to climate change mitigation. Before discussing the policy implications of the results, we first discuss the results.